A World to Win: Posters of Protest and Revolution

A World to Win: Posters of Protest and Revolution

From the “votes for women” campaigns of the early 20th century to anti-apartheid protests in the 1960s and more recent anti-war movements, this exhibition of posters provides a fascinating insight into a modern history of dissent and political change

Emotion has a far greater role in politics than we tend to assume, particularly in modern democracies where the people define who acquires power, and who sustains it. The state (or those in power) need to have ways to control and influence the public whose opinions – or sometimes lack of them – are relied on for continued power. As Noam Chomsky has explained, governments and businesses in liberal democracies cannot hold power over their own people through force in the way that they could a century ago, so “public relations” was invented, in order that those in power may control the people. “Propaganda,” said Chomsky, “is to a democracy what the bludgeon is to a totalitarian state.”1

Propaganda, or political advertising, is a fascinating subject in itself, and an interesting way to survey political movements and phases especially. While Chomsky has focused on the establishment’s use of propaganda, and wider public relations, in modern power struggles, the use of propaganda is not limited to the state. Dissenting groups have long used this resource because they also know the importance of appealing to the people – both those already on side and those whose solidarity they desire – in the context of political change. Propaganda is primarily communication: it is a means of one group appealing to a wider group of people, as well as unifying its own members, and branding itself in a particular way. Whether communicating messages of feminism, socialism, or environmental groups, propaganda works in the same way. It appeals to people’s emotions, to their desires and hopes and fears – and in a way not dissimilar to the methods used by advertising agencies or government spin doctors. They use creative means to sway the emotions and, therefore, the actions of the people in their sight.

A World to Win, which is on show in Dundee, having first appeared at the V&A in London, collects and considers posters of protest and revolution from a broad range of dissent over the past century. From the “votes for women” campaigns of the early 20th century to anti-apartheid protests in the 1960s and more recent anti-war dissent, the exhibition brings together a fascinating range of modern history, represented by its visual props. As a historical overview of protest alone, it is a worthwhile and engaging exhibition. The show goes further, however, in questioning and commenting on the specific ways in which propaganda posters have been used to effect political change, and this part is particularly interesting and original. It is a chance to delve into the way people are manipulated, inspired and influenced, for better or worse – and shows how seemingly simple messages can lead to international revolution and change. It strips the discussion of PR and spin to a basic, essential level, and in so doing teaches lessons valuable to anyone interested in how politics works, and how people work.

The exhibition is structured around a set of graphic strategies employed by various groups and movements in their quest for political change and influence. Each section has a distinct theme and effect, despite the posters in a given group relating to disparate concerns and events. They show that specific narratives are communicated in order to attract attention and emotional response, and give examples of when and how these strategies worked, and what it means to develop a visual language of dissent and political change.  In Smashing the System”, for example, the posters depict imagery of aspiring labour movements in Russia and Germany, following the demoralising, destructive first world war, and anticipating political change in the wake of social upheaval and disaffection. In these posters, workers destroy symbols of oppression, which chimed with the anger at the time towards the broken postwar societies out of which these movements grew. The posters inspired their audience to rise up and imagine a new society in which they were not demoralised, but powerful. The worker was celebrated as a hero, and images of such a figure represented the workers’ movements. Later movements used imagery that recalled these early revolutionary posters, albeit in a very different setting, such as the fall of communism in eastern Europe. In both, the central message was that the people could destroy the established power, and in so doing feel heroic and free. Across the posters, also, there is a tendency to use archetypically masculine imagery – muscular men as the “workers” – involved in violent action against a brutal establishment, such as the red muscle man in Mihály Biró’s Vote Social Democrat (1919) or the giant worker’s hand crushing a little man (the then prime minister, Edward Heath) in Ken Sprague’s Crush Anti-Union Laws (1971). One type of masculinity is pitched brutally against the other to communicate, quite simply, a new order replacing an outdated one.

In New Dawns, meanwhile, the tone is less violent and the movements’ visions of new worlds are communicated with optimistic, hopeful imagery that encourage viewers to imagine something utopian and miraculous. They tend to be harnessed at times of heightened political change, and optimum possibility, and use this sense of potential to communicate visions of the future that are fantastical. The people depicted in these works are often surrounded by light, and stand in unison, facing a bright future in solidarity and friendship, such as in Walenty Zietara’s Freedom, Peace, Work (1919), and Gerald Eric Spencer Pryse’s Forward! The Day is Breaking! (1910), designed for the Labour Party in Britain ahead of a general election.

In All Power to the People, the tone of the posters is slightly angrier, and there is a greater focus on individuals and personal emotions, rather than a vision of a glistening future. Given that these posters tend to originate from feminist, gay rights and civil rights movements in the late 1960s and 70s, and the point of them is usually to inspire empathy and solidarity within those groups and beyond them, it makes sense that the posters focus on the power and attraction of the people involved in the movements. They show black people, gay people and women as relatable, empowered and engaging, in order to inspire support from others, and recognition of black power and these groups’ claim to civil rights rather than oppression and dehumanisation.

In the collection of posters titled NO! the tone is negative, and the images expressing opinions against atrocities such as war, apartheid, racism and nuclear weapons do so with blunt clarity and emotional outcry. They are visual communications of outrage and despair, and demand change with minimum superfluities, and bold negative words: No, Never, Don’t, Stop, Boycott, and so on, used alongside direct action such as marches and sit-ins, as in the anti-Vietnam war posters We Won’t Go (anonymous designer, 1969), or Fuck the Draft by Kiyoshi Kuromiya (1968), for instance. The material focuses on the negative reality of war, weapons and racism – objecting to it, as well as emotionally appealing to potential supporters with images of bloodshed and devastation that may sway them into further protest.

By dividing the posters into these groups, viewers can clearly see the way in which posters – and the media, in a broader sense – can be used to advance the causes these movements support, and to acquire political support in general. Some posters rely on optimistic language and scenes, inspiring their audiences to be imaginative and hopeful. Others rely on reminding viewers of their own disaffection and anger. Others still use shocking images and harsh demands to push people into taking a stance against a particular policy or action. Whichever strategy is used, from those shown in A World to Win and similar media outwith the bounds of the gallery, one thing is sure: emotion is political currency. Whether the emotions encouraged are negative or positive, they push people to embrace a new political movement or to denounce an old one. They rely on feelings of personal value, happiness and hope, rather than reason or sense. They give people a dream or a nightmare, and pave the way for a reality that should compare to whichever unreality has been shown, but perhaps never can. These posters expose the role of imagination, romanticism and emotion in modern politics, and suggest that political change is fuelled by unlikely dreams and make-believe as much as fact-based decisions or callous cynicism. They also imply that people would not have it any other way, if indeed they cannot be inspired to care about politics by other means. It takes smoke and mirrors – or rather, bold typed visions and caricatures – to rouse the crowds, to win those hearts and minds, no matter how genuine and serious the cause. Perhaps, after all, art can change the world, in that way.

1. Media Control: The Spectacular Achievements of Propaganda by Noam Chomsky, published by Seven Stories Press, US, 2002. 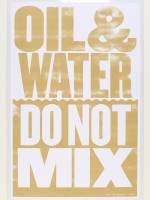 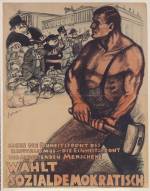 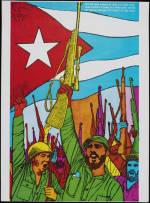 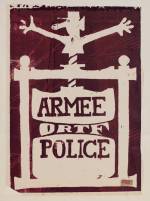 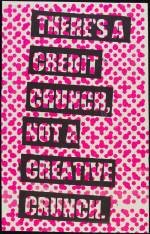 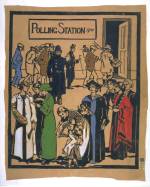