Toulouse-Lautrec and the Masters of Montmartre

Toulouse-Lautrec and the Masters of Montmartre

This fantastic exhibition of belle époque posters, by Parisian artists who used developments in colour lithography and the burgeoning advertising industry to create celebrity for themselves and the stars of cabaret and stage, is now online, delivering the joys of turn-of-the-century Montmartre to your living room 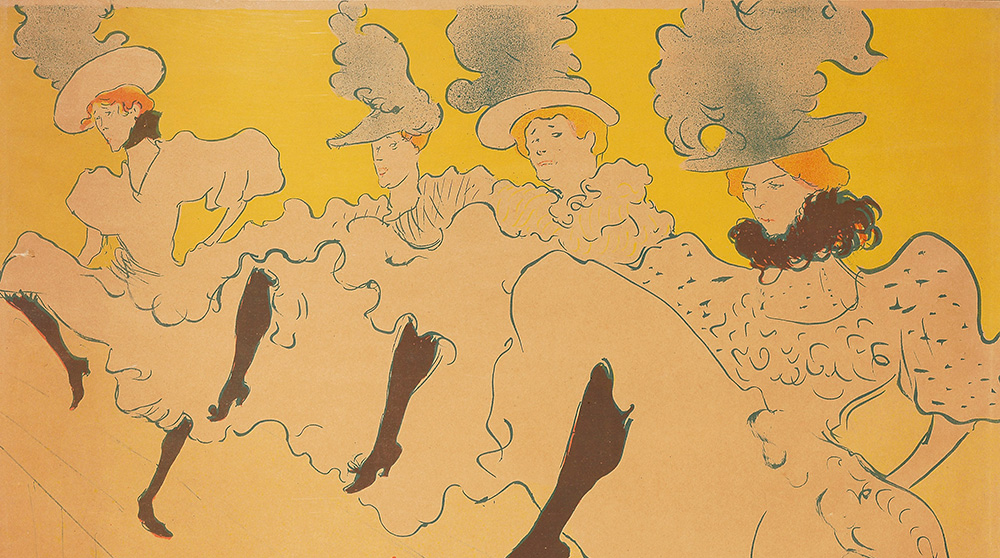 “They don’t pretend to be precious stuff; they’ll be torn down in a little while and others will be put up, and so on: they don’t give a damn! That’s great! – and that’s art, by God, and the best kind, mixed in with life, art without any bluffing or boasting and within the easy reach of ordinary guys,” said the anarchist art critic and aesthete Félix Fénéon.

This exhibition, comprising 80 colour “street art” posters by Henri de Toulouse-Lautrec and his contemporaries, including Pierre Bonnard, Jules Chéret, Alphonse Mucha and Théophile Steinlen, was long in the planning at Victoria Art Gallery in Bath. Sadly, it was open for less than two months before closing because of the Covid pandemic. The gallery, however, which intends to remain closed until next spring, has responded by moving nearly 50 works from the exhibition online: and not just the images, but also audio accompaniments for 16 of them, giving information about the artists, the bohemian celebrities of turn-of-the-century Montmartre, and background music to bring the atmosphere of the café-concert to life. 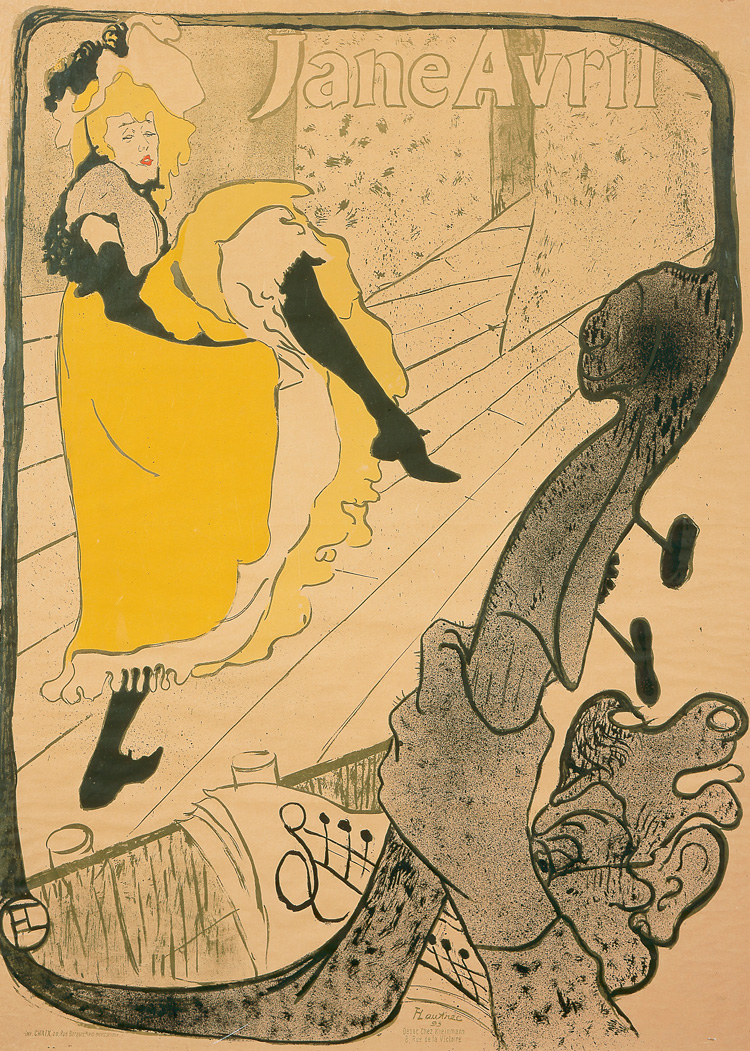 From the monochrome typographic flysheets of the 1830s, issued mainly by publishing houses and theatres, to the colourful designs of the 1890s, displayed on city walls and omnibuses, and in shops and cafes, galleries and exhibitions, France was the pioneer of this new hybrid form of graphic art/design – the poster. In 1891, the art critic Octave Uzanne coined the term affichomanie (poster mania), and posters were appearing on palissades (billboards and scaffolding), Morris columns, kiosks and urinals and in shop windows. Others were pulled on carts by men or horses (voitures pousse-pousse or voitures à réclame) or carried by hommes-sandwichs.

By 1902, an estimated 1.5m posters appeared annually in the capital alone, and collectors began to hold “poster parties” at which guests would go as far as to dress as their favourite illustrated characters. In part, this was due to the lifting of legal restrictions on posters in 1881, which, during the Second Empire, had necessitated registration and prior approval by the authorities; as well as to the mid-century birth of department stores (grands magasins) with promotions, special discounts and brand-name packaged goods; the urbanisation resulting from the Industrial Revolution, with accelerated boulevard culture; and a burgeoning entertainment industry, spearheaded by the infamous Moulin Rouge.

Simultaneously, on an artistic level, this was an era of development in printing methods, in particular of colour lithography, which, originally invented by Aloys Senefelder in 1798, was revived by Chéret in the late 1860s. Chéret, having trained in the medium in London, where he was strongly influenced by the British approach to poster design, and who carried out the whole process himself, is credited with elevating the technique – and, with it, the poster – to an art form. While Chéret did away with the typical black outline, preferring a subtler royal blue one, it was Toulouse-Lautrec who was responsible for the introduction of using a fresh stone for each colour, making the resultant pictures brighter and cleaner. The catalogue of his work lists about 350 lithographs – 30 of these being posters – usually preceded by a lengthy series of studies, often including a spontaneous sketch, a more thorough drawing, a watercolour study, or a study in tempera or oil. 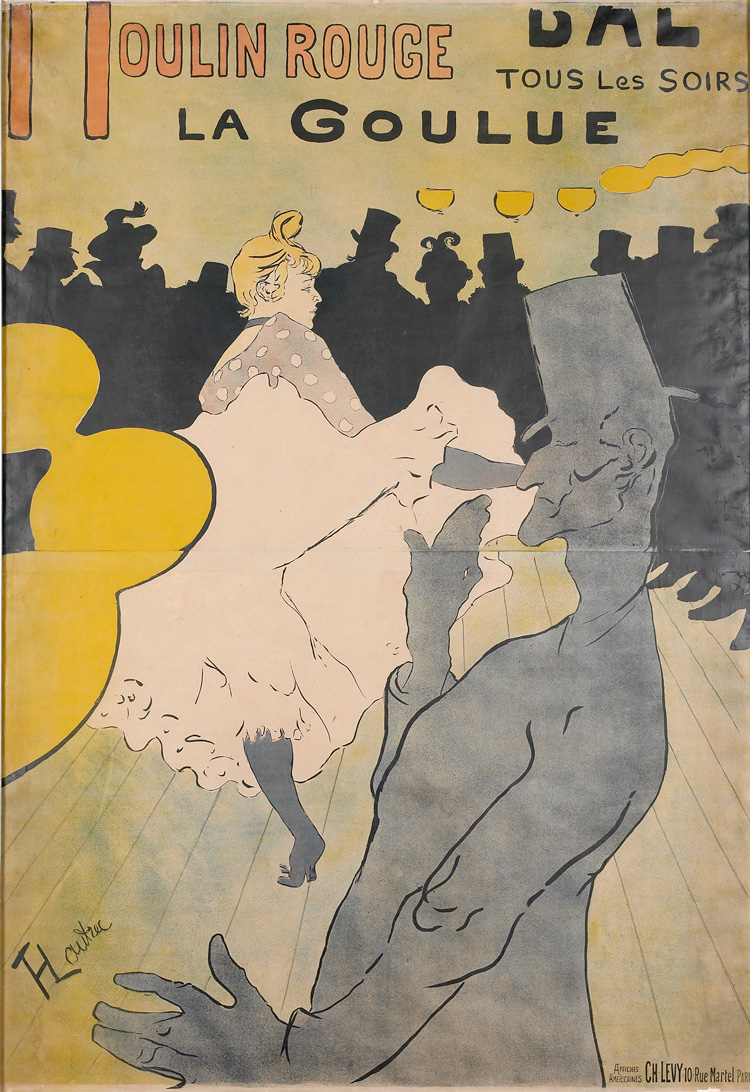 One of the most recognisable of these is Moulin Rouge – La Goulue (1891), Toulouse-Lautrec’s first foray into poster design, and a prestigious commission from the venue, which had opened at the foot of the Montmartre hill two years previously. The composition notoriously broke with existing poster style by depicting a real cancan dancer – La Goulue (“the Glutton”, who got her name from her habit of downing customers’ drinks as she passed their tables) – and the shadow figure of Valentin le Désossé (“the boneless one”, so-called because of his ability to perform seemingly impossible dance moves, including the splits) with his right thumb pointing towards La Goulue’s spread legs, and his left hand positioned so as to suggest physical arousal. This innuendo makes plain the equation between sex, commerce, celebrity and the cabaret. Further, the dizzying atmosphere of the Moulin Rouge, which Toulouse-Lautrec knew only too well, is perfectly captured through the flattening of space, tilted floorboards and the destabilising perspective of the lamp. When 3,000 copies of the poster were put up around Paris, it became an instant success, introducing Toulouse-Lautrec’s art to a broad audience. 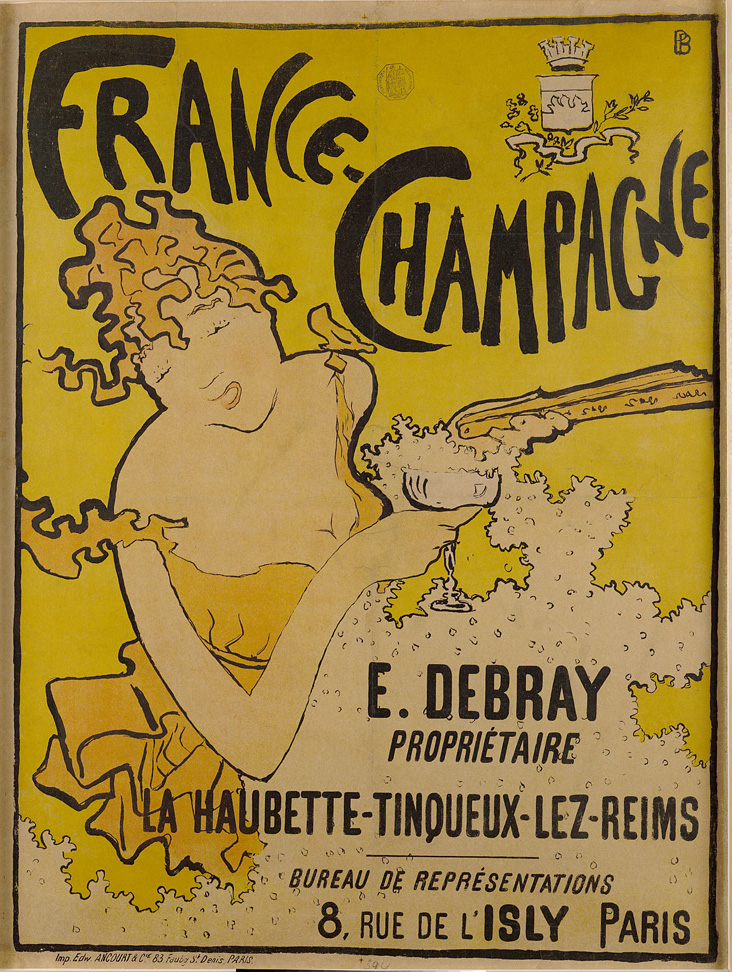 Toulouse-Lautrec created this poster just months after Bonnard made his France-Champagne (1891), also on display here, in all its bold simplicity, inspired by the contemporary fashion for Japanese woodcut prints, which were available all over Paris at affordable prices. Toulouse-Lautrec, too, was greatly influenced by ukiyo-e woodcuts, and one of his posters included is Le Divan Japonais (1893), advertising a venue decorated entirely in Japanese style.

Hovering headless on the stage in the background is the figure of the cabaret singer and actress Yvette Guilbert, recognisable by her long black gloves, and whose voice we hear in the accompanying audio. In the foreground, dressed entirely in black, is the dancer Jane Avril – a friend of Toulouse-Lautrec’s, with whom he became rather obsessed. She appeared frequently in his works and is recognisable by her irregular, jerky movements, the result of a medical condition from which she suffered, known as Sydenham’s chorea. 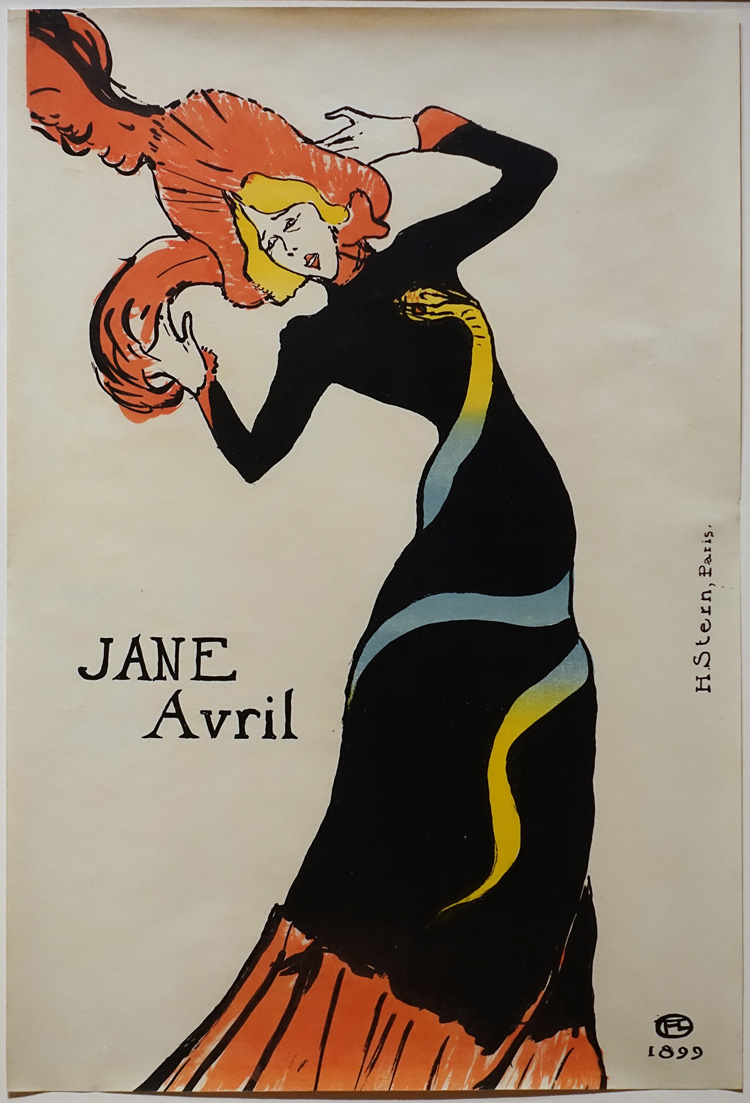 Here she is seen in numerous posters, including Jane Avril (1899), which epitomises these angular movements, and Jane Avril at the Jardin de Paris (1893), one of the city’s most popular café-concerts and open-air dance halls in the gardens of the Champs-Élysées. This poster was commissioned by the dancer to advertise her debut performance at the venue. Again playing with perspective, Toulouse-Lautrec positions the viewer in the orchestra pit, making him an immediate part of the action.

Toulouse-Lautrec did not just portray women, as evidenced by his numerous images of another close friend and nightclub performer, Aristide Bruant, known as “the people’s singer” and renowned for his coarse songs, sung in street slang. Again, with the online audio clips, “visitors” have the opportunity to hear an early recording of Bruant singing, as an accompaniment to the poster Ambassadeurs: Aristide Bruant (1892), in which the imposing figure of the performer fills the composition with his heaving chest, while behind him, in the shadows, lurks the figure of a Montmartre gangster – the sort of character celebrated in Bruant’s songs. 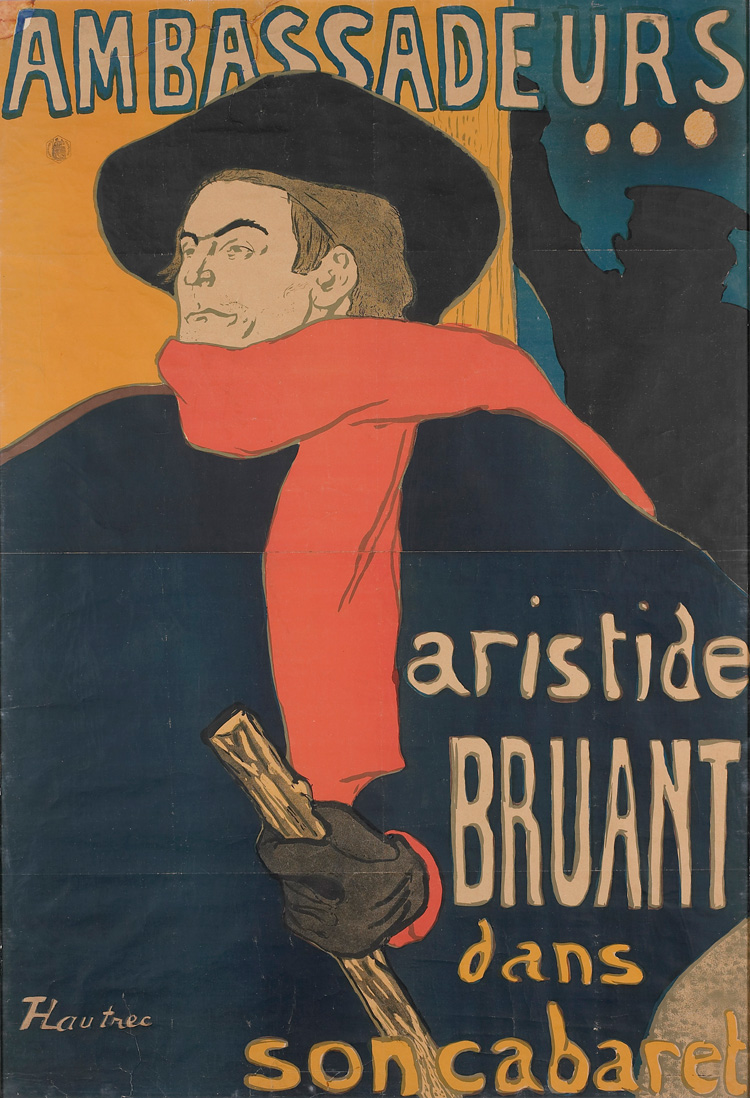 Whereas Toulouse-Lautrec’s imagery is sexualised and hard-edged, the works of Chéret and Mucha are far more art nouveau in sensibility, with a focus on sensuality and flow, rather than sexuality and distortion. As already mentioned, Chéret was credited with the elevation of the use of colour lithography and the poster, and, a generation ahead of the others, he also created a figure known as the chérette, a joyous, elegant and lively woman, embodying the optimism of belle-époque Paris, and heralding a more open atmosphere, in which women were able to engage in previously taboo activities, such as wearing low-cut bodices and smoking in public. His works also looked to the scenes of frivolity depicted by rococo artists such as Jean-Honoré Fragonard and Antoine Watteau.

Despite this superficially “pretty” appearance, however, his chérettes were not entirely desexualised, and one example of a simple yet seductive outfit was described by a contemporary critic as: “A titillating tutu from which emerge two crazy and nervous legs; a bodice made from a hint of transparent cloth that allows one breast to escape and lets the other be easily glimpsed.” Likewise, the historian Georges d’Avenel describes the chérette as “half fairy princess and half streetwalker”. Of the two examples of Chéret’s work on display here, the most wonderful is Folies-Bergère, The fire dance (1897), advertising an appearance by the American dancer Loïe Fuller, best known for her trademark serpentine dance, for which she dressed in swathes of silk, with wands sewn into her sleeves, allowing her to swirl the fabric as she moved, creating spectacularly innovative sculptural forms.

The Paris-based, Czech artist Mucha’s best-known association was with the celebrated stage actress Sarah Bernhardt, with whom he formed a long and fruitful professional collaboration, creating not only posters, but also stage and costume designs. An example depicting Bernhardt included in this exhibition is The Lady with the Camellias (1896), in which she is shown full-length, in flowing robes, largely all in white, surrounded by stars (echoing her own stardom), and every bit as beautiful as the flowers. Another couple of famous Mucha posters on show are Champagne Ruinart and JOB (both 1897), the former also employing sparkling stars as the champagne fizzes – potentially euphemistically – from its glass bowl, and both with flowing hair, almost Gorgonesque, and in the JOB advertisement intermingling with the smoke from the cigarette (the Joseph Bardou Company – JOB – manufactured cigarette papers). This latter image is said to have been inspired by Michelangelo’s Sibyls at the Sistine Chapel in Rome. 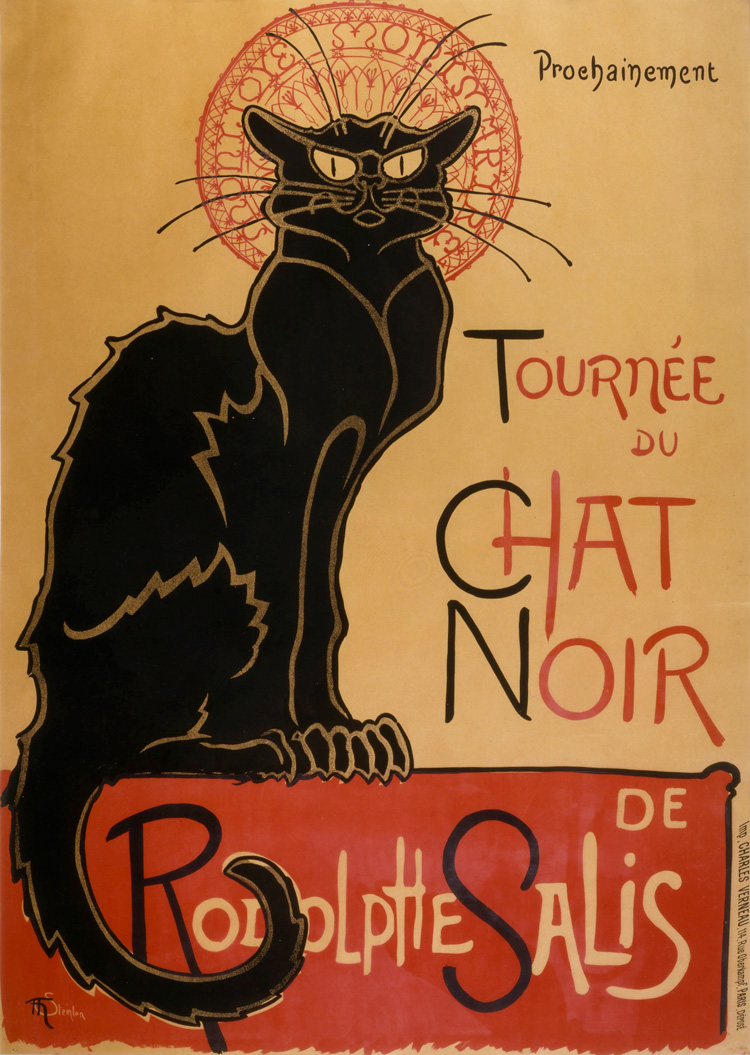 No exhibition of turn-of-the-century Parisian posters would be complete without the iconic Tour of the Black Cat (1896) by Steinlen. Founded by the impresario Rodolphe Salis, Le Chat Noir was another venue at the heart of bohemian Montmartre – a place where poets, intellectuals, artists and performers met.This poster was used to promote the tour of Le Chat Noir’s shadow theatre to cities throughout France, and the stylised contours of Steinlen’s cat echo those of the shadow theatre’s cut-out figures, at first made from cardboard, later from zinc. The cat’s halo is a tongue-in-cheek reference to the halos used by Mucha in a number of his posters. Nowadays, of course, this poster adorns cafes the world over, as well as student dorms, and myriad tourist merchandise in Montmartre and beyond.

With their posters and printing techniques, these artists truly combined art and design in a novel way and lifted the “low art” of advertising to the status of “high art”, displayed to a wider-than-imaginable audience across the streets of Paris. As lawyer and writer Émile Straus concludes: “Here is the true Museum for the Masses, the free Museum of the Day, awakening the joy of an everlasting art.” This compilation of some of the most recognisable and impactful posters, along with the innovative audio accompaniments, offers a wonderful journey back in time to belle-époque Paris, bringing the best-known stars vividly to life, and, once again, disseminating it to a wider-than-imaginable audience via the internet. 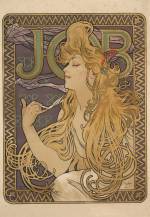