Book review: The Diary of Charles Holme's 1889 Visit to Japan and North America

In December 1888, a small group of British travellers set out for Japan via the Middle East. The party was composed of Charles Holme, a merchant and collector specialising in textiles, the painter Alfred East, Arthur Lasenby Liberty, founder of Liberty's store, and his wife Emma, who was a talented photographer and made a photographic record of much of the tour. All the members of the party contributed in their own way to the growth of Japonisme in Britain and in Europe. Holme went on to become in 1893 founder and first editor of The Studio, which played a central role in the dissemination of knowledge and appreciation of the art and artefacts of Japan. Liberty's London store became the commercial focus of trading in goods from the Far East. Emma Liberty and Alfred East recorded and depicted the art and life of Japan for a curious Western public.

Holme's diaries did not survive in their entirety, but the very substantial section which did survive and is included in this volume tells us a great deal about the attitudes and experience of these enthusiastic travellers in what was then a relatively unknown land. One must ask what it was about Japan which had such a magnetic appeal for Western collectors and connoisseurs. Part of the answer must lie in the sheer novelty of a culture which for several centuries had managed to hold itself aloof from the mainstreams of world history and culture.

However, novelty alone does not provide us with a complete answer without the consideration of the unique properties of Japanese art and artefacts. For tastes formed on the ornate and ponderous character of high Victorian design, Japanese material culture came across as elegant, simple and uncluttered. It was these qualities which fascinated Holme and led him to become one of the foremost promoters of Japanese art and artefacts, not only through the pages of The Studio, but as a founder member of the Japan Society.

The diaries provide a vivid and detailed account of the day-to-day experience of the Victorian traveller in a remote land. We find Holme assiduously spending a morning writing up the events of the previous day, trawling through shops and bazaars on shopping sprees, sketching outside and pursuing butterflies with a net. They also record some of the downside of life as a tourist: the invitation to an inedible meal which from courtesy they could not completely refuse; the, at times, appalling weather and torrential rain; insect bites; the fellow traveller in a ship's cabin who snores so loudly he cannot sleep. In spite of these trials and tribulations, the diaries convey a sense of sheer enjoyment and fun, and a driving curiosity which is the motivation behind all such travel.

In June 1889 they crossed the Pacific to San Francisco, continuing the tour via Vancouver in Canada, and across Canada by the Canadian Pacific Railway. Although this leg of the journey is inevitably less interesting than the Far Eastern element, it nevertheless gives rise to some significant issues. Holme noted the callous disregard for the interests of the Indian population, and that murdering an Indian was widely regarded as a kind of public service rather than a crime. In both Japan and North America, Holme and his party detected the way in which the more dynamic and economically powerful Western culture was capable of swamping and obliterating indigenous cultures. In Japan they deplored evidence of bad imitations of Western models by Japanese artists and designers. In North America they witnessed a whole culture being swept aside by the forces of settler expansion and exploitation.

Such documents provide us with a vivid immediacy and detail which no amount of historical narrative can supply. These diaries will, I am sure, be mined in future years by readers who wish to reconstruct the experience and world-view of Western travellers of the late 19th century who became cultural leaders in their respective areas of enterprise. 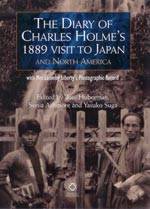