Perhaps the most surprising statement in this book (at least for a European) is that Ettore Sottsass is still virtually unknown in the USA. This despite the shock and horror of 'Memphis' (and the film parodying its style, 'Ruthless People', starring Danny De Vito and Bette Midler), the work of ex-Memphis designer Peter Shire in California, and the fact that Sottsass himself designed the GE115 computer, which was made jointly by Olivetti, Bull in France and General Electric in America in 1967. There is also the Murmansk silver bowl of 1982 in the New York Museum of Modern Art's collection, and the Tekne 3 electric typewriter of 1964 - although, in this case, a version modified by George Nelson, who softened its hard, architectural lines to make the typewriter more acceptable to the American market. But then, I do remember accompanying Sottsass on a tour of English art colleges in the 1970s when no one knew who he was. Only after students talked about his lectures did the staff realised that they had missed listening to one of the world's greatest designers.

The book's publication follows the exhibition, 'Sottsass, Designer' held at the Los Angeles County Museum earlier this year, which, apparently, is the first time Sottsass has been given a one-man show in America. The book begins with an introduction by Penny Sparke, who sets the scene by placing Sottsass in the Italian Rationalist tradition of the 1920s and 1930s (he began designing in 1946), which rejected the mechanistic approach to design of the Modernists in favour of the more optimistic and humanistic approach that certainly distinguishes his work.

Sparke then introduces the reader to Sottsass's early paintings (although there is no mention of the Yugoslav action painter, Spazzapan), to his early graphics, exhibition design and ceramics with references to Josef Hoffman, Japanese design, Jackson Pollock and Pop Art, and to Sottsass's role as chief consultant designer to Olivetti that led to his work on Olivetti's first computers (one of which won a Compasso d'Oro) and the GE115 already mentioned. These were accompanied by the first electric typewriters, the red-cased Valentine portable manual typewriter (whose attempt to be for typewriters what the Biro was to the fountain pen was ruined by the rising price of oil - and hence of plastics - which is never made clear), teleprinters and office furniture systems.

What is also not made clear is the unique position given by Adriano Olivetti to Sottsass, whose office was underwritten by the company and who was allowed to work for others, provided they were not in competition with Olivetti itself. This enabled Sottsass to design furniture for Poltronova and ceramics for Bitossi - and, because Sottsass was directly answerable to Olivetti's board, to design products for Olivetti that its salespeople did not like. The Tekne 3 was an example of this. Its form was very different to the sculptural shape given by Eliot Noyes to IBM's first golf ball typewriter.

Sparke's introduction also deals with Sottsass's travels to India, Nepal and Burma, his connections with the Beat generation in America and Italian Radicals such as Superstudio in Italy, arguing that his work with Alchymia in 1979 and his formation of Memphis in 1981 was, in fact, a continuation of his earlier radical designs seen in, for example, the Superboxes of 1968 (inspired by the Beat generation) and the Grey Furniture of 1970 with its Art Deco overtones. Sottsass, Sparke says, believed that the ideals of Modernism could be extended; Mendini, founder of Alchymia, did not.

The furniture, light fittings, silverware, ceramics, textiles and graphics produced by Alchymia and Memphis in the 1980s were notable for their use of both expensive materials like marble, and inexpensive materials like plastics, and plastic laminates in a way that brought to an end the idea that design progressed in a linear fashion. Sottsass's use of materials and colour is discussed by Dennis P Doordan who says that, while Michelangelo liberated form from materials and Frank Lloyd Wright understood the nature of materials, Sottsass explores both materials and colour unfettered by convention or tradition. Hence, in his use of terra cotta, he values the material for its history, and in his celebration of plastic laminates he gives recognition to a material whose use in 1950s Milanese coffee bars and American diners has been ignored by the design profession. For Sottsass, materials are conveyors of sensation - a belief Sottsass Associati developed in the interiors designed for Esprit showrooms in Germany, Austria and Switzerland that were given dramatic colours which broke up a sense of orientation, direction and relationships. Visitors to the stores were expected to navigate their way through a sensorial labyrinth.

The establishment of Sottsass Associati in 1980 not only meant a return to interior design, which had occupied Sottsass in the 1950s and 1960s, but also to architecture, which Sottsass did with his father immediately after the Second World War, when he worked on projects funded by Marshall Aid. He abandoned architecture because (though the book does not tell you this) once the architect had completed his plans, he lost control of the building. So, one of the real values of the book is that it contains chapters on Sottsass' architecture since the 1980s, and especially on his houses as far afield as the USA, Singapore, Italy and Belgium which are analysed by James Steele. While Sottsass himself acknowledges the influence of Gropius, Le Corbusier and Aldo Rossi, Steele argues that Sottsass is linked to the Italian Rationalists and the Neo-Rationalists (Rossi) by his use of primal forms and colour to evoke poetic associations. Indeed, one could almost argue that Sottsass plays with the Rudolf Steiner blocks beloved by Frank Lloyd Wright, but develops angularities rather than assembling them in a very disciplined way. Sottsass is also interested in symbols (and regards his houses like big pieces of furniture) and is completely against turning everything into a commodity.

The book also attempts to describe Sottsass himself, Steele reflecting on his melancholic, detached and fatalistic attitudes. Some insight is also given by the interview with Sottsass conducted by Emily Zaiden (who also provides maker biographies and company profiles). In it, he comes across as a man who is out-of-touch with today - who no longer understands the behaviour of young people whose own technology and culture are foreign to him. This may seem surprising because much of the technology is linked to the early computers to whose magical powers he gave physical form. But then, when I knew him well in the 1970s, Sottsass filled his office with young people because, he said, he was finding it difficult to see into the future.

Besides giving a comprehensive overview of Sottsass's work (although there is nothing on his photography, let alone his wonderful writings), the book is lavishly and beautifully illustrated. 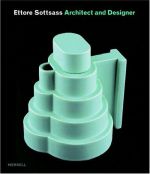