Flying into Denver airport, the Rockies rise high in the distance, a constant reminder of the frontier context here, even today. Likewise, the apparently palisade-topped outline of Gio Ponti's 1972 Denver Art Museum (which contains an evocative Native American collection, appropriately) provides a reminder of, even in those far off times, an architect's urge to supply a signature building.

What the Denver citizenry got then, in their quest for an international profile, was not the hoped-for clone of the Pirelli building designed just previously by Ponti (1956) for Milan, but something altogether different, a contextual work.

Then there is the neighbouring addition by Michael Graves to the Denver Public Library, a further wayward exercise comprising a major grouping of multicoloured drums and corresponding cubes. Downtown Denver attaches all of this to a Beaux Arts civic centre in the grand American way. The light railway hisses reassuringly up to the museum's location. We are a long way from Berlin and the Jewish Museum. Metaphorically for Libeskind, it has been a question of overflying Ground Zero, and all the heavy compromises forced there upon Studio Libeskind, spoiling forever what had been a fine vision for that site of apocalypse. From the Jewish Museum to the Denver Museum, Daniel Libeskind could be himself, and the result in Denver reveals all that, regular clients and no jostling or bullying. So this is how Denver got the true uplift they were seeking.

Given that Libeskind has shared the project design with the Denver firm Davis Partnership, the first thing to strike the visitor is the apparent serendipitous ease with which a Libeskind work has been conjured up with all of the coded, formal iconography of such an identifiable product, not the most readily transferable item globally. Libeskind's own work here began in Studio Libeskind in Berlin, in 1998, on completion of the building there. One could say that in Berlin, the impact of the museum was as if a large chunk of crystalline meteorite had impacted on the Berlin site, itself surrounded by low-cost housing, thudding into this sandy area of Eastern Berlin. Here, Libeskind had researched painstakingly the numerous connections across the site of Jewish families exploring diligently their historic networks, like leylines in the Celtic world, bringing them together at their greatest intensity on the museum site. The zinc cladding that Libeskind used here resonated in the shifting North German light and weather. Families reflecting over the balconies of the adjacent low-cost housing could evaluate the importance of this new phenomenon as they looked down upon it, seeing the long visitor queues snaking out of the adjoining City Museum of Berlin (location of the combined entrance). These have stretched way down the street, past the new bistros and restaurants that have sprung up to meet a visitor boom, where the tables all came out in the sun. So this was the real impact of a culture change: Californian, New Yorker, Melbourne and Japanese accents, exchanging hopes and impressions, reminiscences and a few tears wiped away from the sun-screened eyes of descendants of those who had at least escaped from Nazi persecution.

The Denver Art Museum stands at the south-western end of the Beaux-Arts-related spatial complex, surmounted itself by the design by Gio Ponti. Even in the 1970s, Denver had international cultural aspirations, now more substantially fulfilled. Ponti was followed in 1995 by Michael Graves's adjacent Denver Public Library, boasting drums of a polychromatic character. So if Libeskind's building conforms anywhere here, it does so precisely on account of his own tendency to pursue eccentric form. Here at Denver, in contrast to Berlin, Libeskind's building alights, as it were, gently, poised elegantly. The plaza he has designed creates a kind of stage, a mise-en-scène, for a grand performance by an architectural Nureyev. The characteristically perilous action of throwing out a cantilever here and there fits, as does the bridge link from Ponti's museum. In contrast, at Berlin, the link to the Berlin City Museum is subterranean. It can be recalled that most of the design work for Denver initially took place in Libeskind's former office still in Berlin. A satellite group was established early in Denver.

This is a building where architectural form frequently takes priority over the essentials of curatorial hanging. Lewis Sharp as the director worked very closely with the Libeskind group and with the Denver architects, and engineers from Arup Associates' Los Angeles office. The exhibits today show how this close teamwork at the highest level produced superlative conjunctions within the building. Antony Gormley's 'Quantum Cloud XXXIII' benefits from the 'prow' iconography. Libeskind and Arup jointly resolved the structural demands of the building by literally defeating natural gravitational forces, eliminating in the process vertical supports, apart from the lift towers. The Denver authorities in their own wisdom now ordained that the specific parts of the cantilevered structural edges should have diminutive railings installed around about to protect disabled senior individuals from involuntary collisions. However, these have the appearance of yet another art installation, internally; the flooring assisted structurally in providing steel beams, which usefully act in supporting lateral loads, so acting as tension ties. It could be said that the steel structure has become 'multi-tasked'. To Libeskind this would appear entirely logical.

Now, all that is important is that the 'hang', internally, is effective for the visitor. Much ingenuity will continue to be required of the curators, but contemporary installations and sculpture seem most likely to benefit. Time, medium-term feedback from the public, and a pattern of re-hanging at regular intervals would seem to suit, and will reveal that planar paintings and collages can work. The signs are that this is possible, with some experimentation. Not only hearts, but also minds have been won here in Denver. 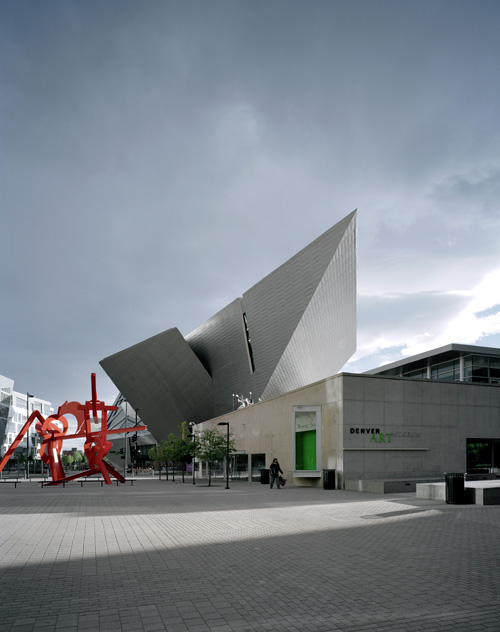 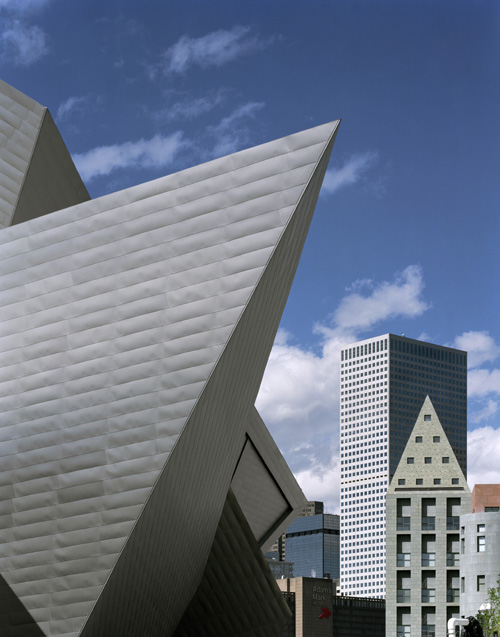 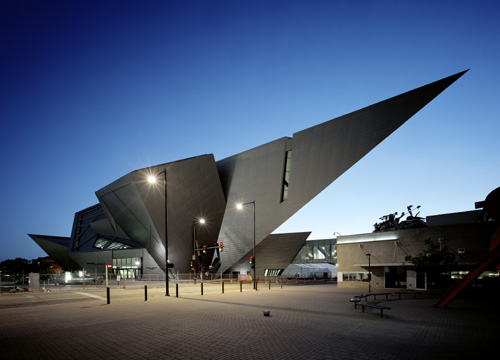 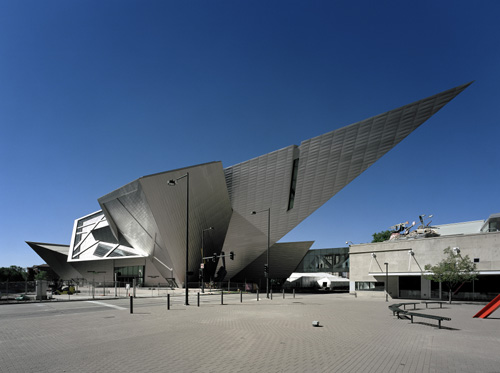 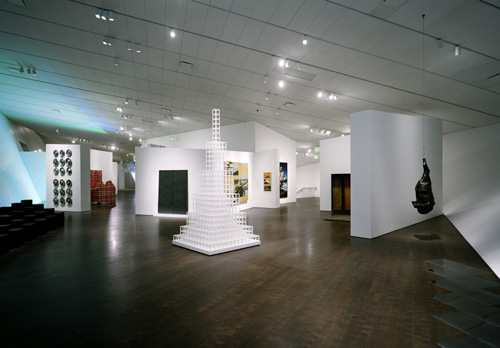