This month, the architect, Richard Rogers, has attained a summit point in his career in winning the UK RIBA Stirling Prize. The building that has won the prize is not even in Britain, but the architect very much is.

The script for this career could never have been anticipated. One of the most interesting aspects is that early on in their careers, Rogers was in partnership with the equally successful architect, Norman Foster. On the face of it, no two architects could have come from a more different background. Foster, two years younger, comes from a working class background, forged through hard graft in Manchester. Before turning to architecture, he served two years' national service in the Royal Air Force. Rogers' cousin was the famous Italian architect Ernesto Rogers of Milan. After his own military service, Rogers, unlike Foster, might have been called unemployable at 20. He, therefore, took a foundation course at Epsom College of Art, where he had been advised to go by Ernesto Rogers, to get into the Architectural Association School of Architecture. Here, the staff were by no means unanimous about Rogers' actual aptitude for architecture. But he persevered, even though his abysmal drawing skills still handicapped him. After some years, and Rogers' basic qualification (Foster was already getting there, although two years younger), the future opened up. The two sparring partners had met at Yale, where both attended postgraduate architectural courses. Despite some delay, both had learnt to work with each other, and on return to Britain, it was natural that they should form a partnership.

Today, it is interesting to measure the progress and the separate trajectories followed by each individual that led to the neighbouring pinnacles attained by the two practices. Both are of comparable reputation, but very different in output. Rogers' practice is the smaller of the two, but both employ significant numbers. There are different methodologies, however. Ken Shuttleworth (who claims to have designed the famous 'Gherkin' building in the City of London for the practice) left suddenly after its launch. In Rogers' practice the equivalent anchorman has been Mike Davies. In output there is very considerable overlap between each practice. This is best revealed through airport design using the principle of the 'big shed'. The basic airport prototype, it has to be admitted, was Stansted, by Foster. Terminal 5 at Heathrow, where gigantic 'tree' columns are a development of the much-praised Stansted. Therefore, Madrid, with its long 1.25 km plan is the amplification of this formula.

Once the technology of the support structure and the span has been provided (as at Stansted) it has simply been a question of larger and longer. Where Madrid has differed from Stansted is the generous (and also informative) application of colour, as well as of a timber inner lining and cladding. Rogers has increasingly resorted to the use of timber in this way. The Welsh National Assembly building was also entered by the Rogers practice and, again, displayed the imaginative use of timber as a core cladding, like a sweeping, large-trunked oak tree. But this project has been outclassed by the Madrid entry.

Rogers has not always got it right, whereas one could say that even with such a large practice, Foster seldom gets it wrong, and even the Millennium Bridge fiasco was quickly rectified by the engineers, as was their task. Rogers' Dome for London is simply not a success, and squats at Greenwich, political bait for possible casino implantation. Rogers' new Law Courts for Bordeaux look more like a winery, (or perish the thought - a distillery) with the vat-like truncations that serve light to the seven courts of justice. Invited to the World Trade Centre site to design a fourth tower for the complex, Rogers' practice seeks to offer transparency in the best glazing mode of today. The iconic symbolism of the material is undoubtedly appropriate, when the glass facades all rise beyond the roofline together with heavy (reassuring) steel cross-bracing, designed to provide full support for the tower in the contingency of a new attack. Psychologically reassuring - but then David Childs of SOM architects has heavily strengthened his own final tower designs. This is the architecture of defence in the 'war against terror' ...

Throughout his career, Rogers has shown great dexterity in always meeting his clients' wishes, and persuading them of his social vision. This ran from the Pompidou Centre, through the Lloyds Building in the City of London and The European Court of Human Rights. Rogers, the individual, continues to embrace major environmental causes and the practice itself is still established on the basis of a salary structure where the most junior employees' wages are related to the salaries of senior staff, who might otherwise, as in the corporate world, literally go ballistic. 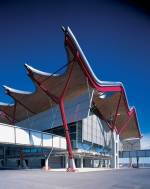 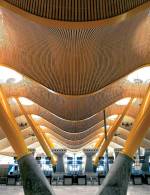