A Delicate Game of Cat-and-Mouse

A Delicate Game of Cat-and-Mouse

The experience of art is not merely a matter of looking at it, but thinking and talking about it. For nearly 50 years, English critic and biographer Michael Peppiatt has been getting artists to talk about the art they create, offering readers ways to consider the art they see, and sparking curiosity about the artists who made it.

In Interviews with Artists 1966-2012, Peppiatt presents 44 of his conversations with painters, sculptors, photographers and architects published between 1966, at the start of his career, and the present. The selections reflect Peppiatt’s interests (eg School of London artists), opportunities (as a reporter based in Paris) and friendships (with Francis Bacon and Zoran Music, for example), as well as priorities of editors and curators at particular points in time.1

Peppiatt’s loose organising principle groups subjects into sections: School of London Artists, Studio Visits and European Artists, with interludes devoted to three architects (Norman Foster, Richard Meier and Oscar Niemeyer) and three photographers (Brassaï, Henri Cartier-Bresson and Hans Namuth). There is symmetry and elegance in Peppiatt’s Old World, leisurely style. In fact, the best way to approach this book is with an equally leisurely, meandering pace; dipping in and out guided by instinct and whim and stopping along the way to savour the insights, humour and camaraderie revealed in its pages.

Peppiatt admits that his collection is “a kind of weird, patchy but exalting autobiography”.2 Perhaps, but in its best moments, Interviews with Artists succeeds as a guide to the interview as an art in itself. Some entries are typical Q&A format, while others are distillations, where Peppiatt’s engaging commentary serves as glue for choice quotations from his sometimes willing, sometimes stingy sparring partners. For Peppiatt, the interview is a game where roles might be obscure and often reverse without warning. A strong sympathy between him and his subjects is balanced by wariness bordering on the adversarial. 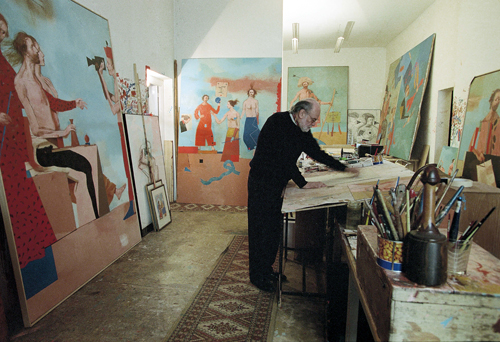 For example, in his preface to an interview with Mexican figurative painter Miguel Condé, produced in connection to a November 1992 show at Galerias Ignacio de Lasaletta in Barcelona, Peppiatt says: “The heart of his art is just what Miguel, and most other dedicated painters, refuse to reveal. The interviewer blunders forwards, intent on pinning down source and influence, practise and technique, and Miguel gracefully sidesteps, like an experienced matador.”3

Similarly, in a delightful article on Swiss sculptor Diego Giacometti (1902-85), Peppiatt relates how, during a 1985 visit to the artist’s Paris studio, Giacometti tried to put him off by lamenting the rise of nouvelle cuisine over “real food” like boeuf bourguignon, and playing the fool, as if no sane person would expect an artist to add words to his work: “‘But there’s nothing to say about it,’ Diego says, for the third time this evening. His hands rise in a gesture of helplessness.”4

Peppiatt identifies such sidestepping shuffle as a game of cat-and-mouse, alluding to the predatory aspect of the art world, and enduring conflicts between the need for promotion and for privacy; the desire to express the inexpressible; and the effort to go deep in a short and likely ephemeral piece of journalism.

Clearly, Peppiatt is used to relinquishing control of the interviewing process, becoming the mouse, and thus reaping nuggets of gold at unexpected junctures. In the brief piece on Giacometti, readers will discover things rare and true about the man and the artist. Here, the more famous Alberto Giacometti’s brother comes out from the shadows, wearing old work clothes and a battered hat, as the maker of hauntingly strange, artifact-like lighting fixtures and furniture.5 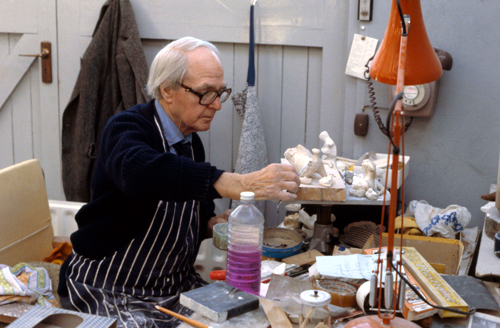 Peppiatt is skilled at reaching for iconic moments and phrases, and quick to confess to his own blind spots and prejudices. For instance, in 1983 when Peppiatt visited Henry Moore at Moore’s studio in Much Hadham, a village in Hertfordshire, Moore was at the pinnacle of his career. While Peppiatt admired Moore’s initial “radically innovative and controversial” sculpture, he says that he brought a great deal of skepticism to the interview. To some extent, Peppiatt’s friendship with Francis Bacon, a critic of Moore’s work, coloured his opinion.6 Nearly 30 years later, when Tate Britain opened a 2010 show of Moore’s early work and French publisher L’Echoppe reprinted Peppiatt’s 1983 interview in small-book format, Peppiatt admitted that, like many others, he had allowed himself to become a victim of Moore’s overblown success.

Although unfortunate, given the milieu of the book it is no surprise that only two women appear in these pages – French painter/designer Sonia Delaunay and Italian painter Ida Barbarigo – and that both of them married well-known artists (Robert Delaunay and Zoran Music, respectively). Peppiatt chose to reproduce three interviews with his friend Music (1987, 1995 and 1999), and two each with London School artist Frank Auerbach (1998 and 1999) and Irish American painter Sean Scully (both from 2004). The act of listening to an artist’s voice in different circumstances results in an expansive sense of character. It also suggests the unpredictable nature of interviewing; apparently, the game of cat-and-mouse is also a game of chance and timing.

At 434 pages, and with minimal illustration – the entries open with black and white photographs of the artists in their studios or offices – Interviews with Artists might seem best suited for a scholar’s shelf. But its appeal to general readers should not be discounted. As Peppiatt’s career demonstrates, thinking and talking about art are part of the experience, rewarding viewers with understanding, appreciation and enjoyment.

Despite the difficulties that come with pinning down the creative process, hearing from those who make art amplifies such enjoyment immeasurably. Looking back on his career in the arts, this veteran of many delicate games of cat-and-mouse sums up his motivation convincingly in the volume’s introduction:

Who would not, to put it in a nutshell, give all Vasari for a short, searching conversation with Michelangelo?