This volume is a rare compendium and covers primarily the growing success of the painter Ben Johnson, well renowned for paintings and photographs of contemporary buildings. His ability meticulously to interpret the essence of such architecture, down to the last sun-shadowed rivet, is not in doubt. He has become the interpreter of key works of the 20th century, by such as Cesar Pelli (1968), James Stirling, and most expansively, Norman Foster.

Initially and for the most part, his paintings were not as a rule commissioned. More recently Johnson found that he had an instinctive understanding of Foster’s aesthetic and design ethos, which indeed tied in with Johnson’s spare, rigorous and economical style in painting.
In an essay in the book the author and critic Charles Jencks sought out the essence of this creative ethos and came to the logical enough conclusion that a degree of intellectual “modern cryptic spirituality” of a broader cultural significance was in play here. Reference to the minimalist pauses in the playwright Harold Pinter’s work is made, and also to what Jencks calls a “negative theology”, which became an established architectural orthodoxy in Cambridge in the 1960s. To the outside observer this seems to equate with a very English tendency to purge and cleanse, a kind of Puritanism, and he extends this rationale to both Johnson and Foster himself. (Possibly Jencks here has his tongue in his cheek). But he could be right.

Outstanding works by Foster lately, such as the bridge over the river Tarn in France, with its seven masts, bear this idea out. Mel Gooding, art historian, makes the important point in his essay, that Johnson’s “idealising symmetric order” which he always brings to his depictions of Foster buildings, is not that of the buildings themselves, which conform diversely to quite other principles of order and arrangement, but is that of his own visual construction and derives from his own superb photographs of which there are many in this book. His use of the single-point perspective, Gooding avers, leads to a “contemplative abstraction”. And typically here, in Johnson’s photographs of Foster’s Sackler Galleries at the Royal Academy, London – so brilliantly inserted between two blocks on the main axis – it is the capturing of light falling into the crevice of the building, white as white, that is Johnson’s main expressive element yet again, captured with remarkable skill. 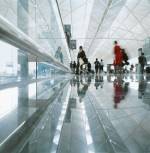