Brad Pitt’s Make it Right housing neighbourhood reconstruction initiative for New Orleans is not the first ever solution to follow a catastrophe, but it is the most ingenious 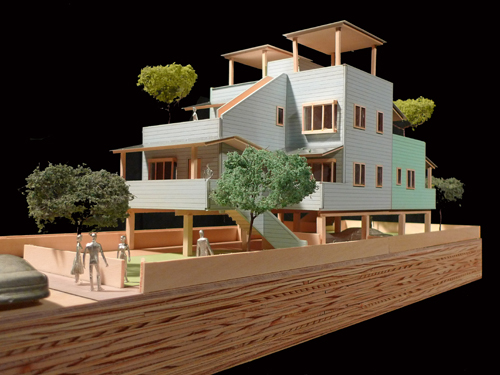 Previously in Banda Aceh, Indonesia, following the 2004 tsunami, 140,000 new homes were provided by the authorities in a record space of time. Brad Pitt himself had only visited New Orleans itself some two years after the Katrina hurricane struck, but that was time enough for him to grasp the urgency for rebuilding, where little had been achieved at federal or local level to mitigate the collapse of whole communities. Pitt organised some 20 architects worldwide initially to design new houses, breaking through obfuscating layers of red tape to mobilise results. His lead organisation Make It Right, focussed on the Lower Ninth Ward of the city. Some 20 houses have now been designed, and constructed, and another 130 are planned. The architects who have answered Make It Right’s appeal, came in line promptly from around the world; many of whom were known to Pitt personally; others came from the locality of New Orleans itself. We here look at four of the solutions already developed.

Morphosis, from Santa Monica, Los Angeles and former Pritzker prizewinners, under Thom Mayne, designed a “floating” house, which also incorporates elements of the “Shotgun House” familiar to New Orleans. The house has a foundation that allows it to function independently of the local infrastructure, which has mostly yet to be repaired, on a different time frame. On a foundation of expanded polystyrene foam (as encased in glass-fibre reinforced concrete), a house “chassis” of a thickened raft slab, plus its own service core, and a substantial rooftop rain collector, all allows for an economic unit. This is part prefabricated, locatable on arrival on site on four stabilising concrete pads, placed between two rear steel masts, which safely anchor the house in the event of flood recurring. The whole house is both sustainable and readily maintainable. Advanced technology distinguishes this design, which in all respects shows an easy compatibility with local tradition, neighbouring or otherwise.

The architect David Adjaye from London has designed a house that switches the public space focus from porches at entry-ground level (typical in New Orleans) to second floor roof terrace level. In this way local breezes can be utilised and safety is built in. This house as built differs slightly from that originally proposed by Adjaye, yet “sitting out” on the entrance steps is still possible, at front and back. On the first floor level there is one continuous “two-zone” living space. Above a conventional concrete pile foundation system a normal balloon frame system is applied, and a lightweight aluminium frame then supports a stretched fabric canopy. This allows a clear and simple disposition of usable space with appropriately accessible storage space. This house by Adjaye was influenced by traditional practice in North and West Africa where houses rise higher for climatic, security and social reasons, and the simple clear visual statement made harmonises well in the Lower Ninth context.

The house design by Shigeru Ban (Tokyo) reflects the architect’s particular experience from the 1995 Kobe earthquake disaster program for which he had provided an emergency construction employing ready-mades in the form of cardboard tubes. These were also utilised and exhibited as part of his interpretation of the ethos of Alvar Aalto in the Barbican, London in 2008 (who had also drawn attention there in Finland to early prefabricated housing units, something not much publicised in Aalto’s oeuvre). So for New Orleans’ Lower Ninth Ward, he hit on an ingenious solution, utilising structural furniture units, whereby these prefabricated elements became both building blocks and insulation, as well as providing storage capacity, and were readily erectable on site. They provided the quality of materiality yet with distinctly lower costs. They were also able to withstand hurricane strength winds while supporting the roof with structural bracing. All this allowed for a highly flexible open plan interior, allowing also glass walls, which can open out externally. A minimum of skilled labour is needed for erection on site. Notwithstanding such innovations, the house itself is visibly similar to the established typology of New Orleans’ Shotgun style, and hence maintains the necessary connection to the street (back and front) and surrounding neighbours. The attic space in the duo-pitched roof offers sanctuary in the case of future flooding. This house on construction varies very little from the design first provided by Shigeru Ban.

Gehry Partners, Los Angeles, under the leadership of Frank Gehry himself, designed for Make It Right a two-family home following feedback from the community. Each house faces one-way from the other, contrapuntally each using street access directly across. The building as a whole, display something of Gehry’s original virtuosity of the 1970s houses in California yet very coolly applied. Gardens and roof and balcony terraces for each “house” have intelligent green space and planting. This particular solution promises to be one of the best when erected.

There have been some exemplary local submissions, from New Orleans-based architects such as Concordia, Eskew-Dumez-Ripple, Trahan, Waggoner and Ball, Bild Design, Billes, Building Studio. These reflect either a firm adherence to local modes or else react with simulated internationalism, and so less than successfully against the same. Then there are certain expressive proposals from outside which seem to remind the local community too much of the “collapsed format” created by Katrina. It is unlikely any of these will pass local muster, notably two from the Netherlands. They who have the greatest historical familiarity with flooding seem visibly to remind us in a cautionary manner of that maritime devastation in their built profiles. By contrast, two schemes, one from Ghana and one from Chile, demonstrate the excellence of a shared universality of thinking related to climate.

Overall, architects have rallied magnificently to the cause, submitting schemes without profit fees. This is a remarkable venture overall, in the extent to which Brad Pitt’s Make It Right has led the way, succeeding in finding a range of new house designs from around the world. Miraculously, from outside, funding is also materialising fast. Bill Clinton himself was lobbied and through his post-presidential connections this has come good. Elsewhere, maybe Texas has its own preoccupations, Galveston on the Gulf having twice been flooded. But it is never too late. At the Lower Ninth Ward, with 150 units planned, Make It Right and the Graft organisational back-up group have already shown the world how to bounce back. 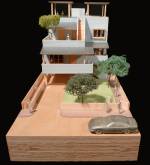