Computer-Aided Three-Dimensional Interactive Application (CATIA) unlocks the magic that enables Frank Gehry's unique constructions actually to get built. Before computer-aided design, none of this would have been possible. So Gehry's architecture is essentially of the 21st century 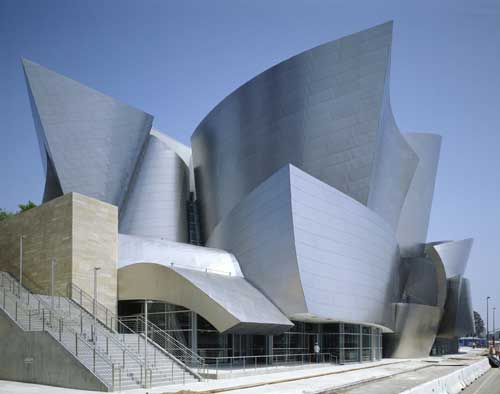 Disney was fundamentally a creation of the 20th century, drawing upon a timeless wizardry of both narrative and animated visual imagery. It is utterly appropriate that the new Walt Disney Concert Hall in Los Angeles, initiated and part-funded by Diane Disney Miller and her late mother Lillian, was constructed for the City of Angels. Magic is not easily found nowadays, but this city seems to have an innate understanding of enchantment, and has now realised it in abundance.

In 1987, Lillian Disney had a vision of this, and donated an initial fund of $50 million to 'build a world-class performance venue as a gift to the people of Los Angeles and a tribute to Walt Disney's devotion to the arts'.1 In 1988, Frank Gehry was chosen as architect (seemingly an almost foregone conclusion for the Borromini of the West). Gehry made several hundred conceptual models in the early period, on the base provided of a 2,200 space, six-storey underground car parking facility, which was publicly funded. Time and space fanned out then, as they do in Disney tales. In between, Guggenheim Bilbao actually got built - son of Disney, in truth. But Disney was still nowhere to be seen. In between too, the Roman Catholic Cathedral designed by Rafael Moneo also got built two blocks away. Definitely not an ugly sister by Moneo, but the Disney project - with only a car park to show - now had a Cinderella feeling about it…

But eventually, more models and some 30,000 computer drawings later, Gehry got it built. Lillian Disney loved flowers, and Gehry incorporated a kind of petal structured, folding aesthetic, close to natural form. A magical landscape bloomed in the urban desert of Los Angeles, its stainless steel panels glinting and reflecting the sun and moon, shimmering magic. Gehry himself also designed a life-enhancing fountain, called 'A Rose for Lilly', involving thousands of small pieces of shattered white and blue Delft china. Lillian, who collected Delft, took it in good grace. Gehry the Sorcerer had only good intentions with his magic.

When Gehry was 16, amazingly perhaps in terms of coincidence of talents, he went to a lecture at the University of Ontario, by the great architect from Finland, Alvar Aalto. But then you think, 'of course'. Whether it was a chair design, or a great library building, there was another sublime sorcerer at work. Gehry never forgot this. Aalto would have applauded the sculptural display of Gehry's organ design inside the Disney. And what would Aalto have done with a CATIA computer program?

The $276 million (£163 million) new concert hall, opened (at last) this October, has now given Los Angeles the architectural world class large-scale masterpiece that it has long sought. There always was, since 1986, a small equivalent in class, Arata Isozaki's Museum of Contemporary Art downtown, a gem of a building. But Gehry's scale of construction is of an altogether different dimension. Gehry's skill in creating a truly photogenic building underpins, subconsciously perhaps, an aspect not always evident in 20th century masterpieces. With the Disney, appropriately, the lens can do panning shots all over, filmicly caressing the gleaming, undulating exterior, or the inner, beckoning folds.

Early precursors in this genre of 'signature' works were Frank Lloyd Wright's Guggenheim Museum in New York (currently showing the best ever display of Jim Rosenquist's work) as well as, of course, Jorn Utzon's, Sydney Opera House. Daniel Libeskind's Victoria and Albert Museum 'Spiral' will also, hopefully, display this quality. But Will Alsops' so-called 'Fourth Grace' building, planned for the Pier Head at Liverpool, cannot make it. There is no magical sorcery at play there, only lush packaging with signature, which - as every child knows - is not the same. Gehry, like Hans Scharoun with his Berlin Concert Hall, has acknowledged the value of gliding and strolling promenades, steps, terraces: the musical interval is an important part of the concert-going ritual, and Gehry offers movement options here as never before. One of the surviving 20th century definitions for architecture is that of 'frozen music'. But in the Disney, Gehry has unfrozen the process. Symbolically, the contemporary 'baroque' display of the organ reveals Gehry's awareness of an old tradition, best exemplified in the organs of 18th century Vienna.

In the recently completed Bard College Center for the Performing Arts, Annandale, just north of New York City, Gehry provided a kind of prelude to what was to come: the building sails like a Clipper, keenly welcoming those Atlantic winds. But here, in the City of Angels, it is different, capturing sun and moon simultaneously in a great architectural eclipse.

And just to show that he can make tiny miracles happen too - in Dundee, Scotland, on a promontory overlooking the Firth of Tay is 'Maggie's Centre' (see Maggie's Centre, Dundee) lovingly designed and built, at the aegis of the American Architect/Philosopher/Critic, Charles Jencks, for the life-enhancement of cancer sufferers.

Only Gehry in the 21st century has revealed the human genius capable of mastering the power of the computer. Gehry persuaded his software specialists to adapt CATIA - originally intended for aircraft design at Dassault Systemes - for architecture, in a classic example of technology transfer. The three-dimensional master model had all the characteristics of a Disney monster, but the Gehry office valiantly tamed it. They turned it towards the needs of humanity. Gehry, defined as a computer-phobe, simply says that it enabled him to get closer to the craft techniques upon which architecture has always relied. It is just that, today, the scale of miracles is different from that of the recent past. Gehry has guided us back to a legendary past and now offers architecture a brilliant future. To realise this, Gehry Technologies has been formed, making the breakthrough skills available to other architects. 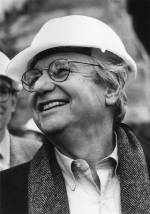 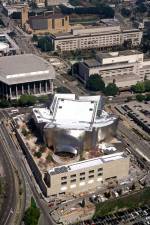 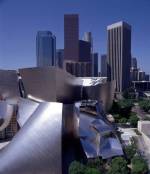