It would not be an exaggeration to claim that the 21st century belongs to Asia - if not to China alone. Deng's reopening of doors and the economic reform of the 1980s and 1990s paved the way for a resurgence of the Chinese economy. Today, 'Made in China' can be seen stamped over all kinds of products and goods. Centred on a labour-intensive market, China has begun to embrace social change and new technologies. Evidence of such change can be seen in its energetic construction industry today. 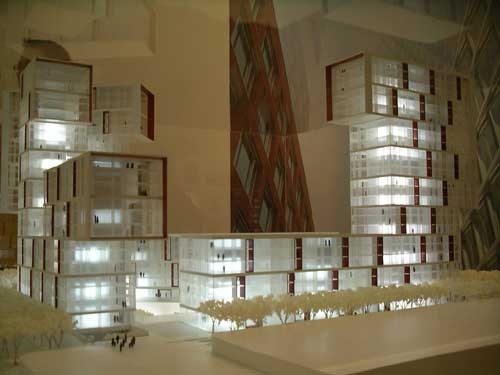 The First Architectural Biennale Beijing 2004 (ABB 2004) is an ambitious attempt to showcase the latest developments of architectural culture and the building industry in China. Comprised of three parts - exhibitions, forum and architectural theme park - ABB 2004 looked set to overwhelm visitors with its 'numbers' game. Held from 20 September 2004 for a mere two weeks, there were a total of eight exhibitions with an exhibition area of 200,000 square metres. A total of eight forums were organised, with the participation of 10,000 professionals from around the world predicted. The organising committee further speculated that two million visitors would be involved in ABB 2004 events. Approved and supported by the Chinese Ministry of Culture, ABB 2004 was no doubt the largest architecture show in Chinese history.

However, this obsession with numbers - quantity in place of quality - seems to have been the organising committee's fatal error. The whole Biennale was run more like a commercial exposition than one that served to push artistic and architectural limits and provide a platform for discussion between home-grown and overseas professionals. According to Chinese numerology, the number 'eight' is auspicious; it has certainly been stuck to with great faith here, yet the outcome was far from satisfying. The eight exhibitions each had their own theme, all seemingly unrelated. The organisation of eight forums with different themes within eight days meant resources were spread thinly - and the resulting discussions were far from fulfilling. Imagine five of the forums occurring on the same days and at different locations. The audience had to be on the dash from one place to another non-stop - and the forums themselves fell short of expectations.

It is inevitable that ABB 2004 be compared to the internationally acclaimed Venice Architecture Biennale - also held in September 2004 but for a longer period of two months. The Venice Biennale has a long tradition and always comes with a clear theme of investigation. There is one main curator to decide on the overall theme - and each national pavilion in turn has its own commissioner. An architecture practice is commissioned to design the main exhibition space.

ABB 2004 was run very differently, with the various exhibitions curated by a different curator - each with their own agenda. Other than the main exhibition 'Infinite Architecture' - which showcased the works of international eminent architects like Koolhaas, Hadid, Holl, Herzog and de Meuron, Rogers, SOM, RTKL and had a 'purer' exhibition content - the others had a tint of commercialism that smeared the professionalism and authority of the show. Commercially supported by developers, these exhibitions betrayed the desire of the sponsors. The curators of the 'Infinite Interior' exhibition had invited ten architects to design the interior of model apartments and then later auctioned them! In addition, only four countries presented their national pavilions in ABB 2004; namely Switzerland, Germany, the Netherlands and France. ABB 2004 undoubtedly lacked the global reach that an international biennale should embody.

Despite the less than enthusiastic response of the mainstream architecture world to this first biennale - with one critic even initiating a boycott action over the internet - it has long been needed by the architecture community in China, which in the past has lacked any form of dialogue with its international counterparts. It not only provided a platform of discussion for the professionals and a chance to learn for students and fans of architecture; it also gave the developers an opportunity to broaden their view. Through the resulting media reports, it was able to popularise architectural culture with the general public and further raise Beijing's profile. With the Beijing Olympics 2008 looming around the corner, one can expect further waves of frantic construction activities in the coming months. This huge construction site will undoubtedly produce critically-acclaimed new works. Hopefully, we will also see a better organised Architecture Biennale Beijing in the future.