The birth of modern architecture can be traced as far back as the 17th century, when Claude Perrault, the French physician-architect, first challenged the universal validity of Vitruvian proportions. Since then, modern architecture has evolved as a continuous cultural effort amid technological, territorial and social transformations. The history of modern architecture is as much about consciousness and polemical intent as it is about the buildings themselves. Many built works have been enlightening, but numerous unbuilt ones have also been more than inspirational.

Organised by the Mori Art Museum, Tokyo and the Fonds Régional d'Art Contemporain du Centre, (FRAC Centre), Orléans, 'Archilab: New Experiments in Architecture, Art and the City, 1950-2005' examines those radical and visionary approaches to architectural design and urban planning that have altered the way we think about and use the city since World War II. The exhibition features 220 projects by 90 architects and artists, borrowed from the collections of the FRAC Centre and the Centre Pompidou, Paris. The models and drawings shown are organised into four sections: 'The Pulsating City', 'The Endless City', 'The Deconstructed City', and 'The Contextualised City', each section loosely corresponding to different decades and concerns. Like a historical text, the exhibition brings us to the urban utopias from the 1950s, analyses Deconstructionist works from the 1980s, addresses the influence of new technology in the 1990s and reflects on the future direction of the current avant-garde.

The first section, 'The Pulsating City - The Body as Laboratory' explores the early renaissance of experimental architecture in the 1950s and 1960s. This era of revolution saw the birth of many thought provoking and, at times, absurd ideas on how the architecture profession should react to the city. Among these are the luminary works by English group Archigram, who applied the idea of 'mobile architecture' to the reorganisation of the city itself. The group conjured up fantastical images of structures such as the 'Walking City' and the 'Instant City' - concepts which were to capture the imaginations of many generations of architecture students to come. Inverting the preconceived notion that cities must be literally rooted to the ground, these visionary projects embodied the character of mass-media networks or events, with the idea of perpetually moving architecture becoming a metaphor for the liberation of the body from the social and political ambitions connected to it.

'The Endless City - An Expanding Environment' features projects exploring the ideology of architecture, transforming it from a physical object into a system for total control over the entire environment. 'Megastructures', by the Japanese Metabolist group, explores the possibility for immeasurable extension and duplication using industrial components. In so doing, architecture becomes no longer a single object or building but rather a systemised environment or an expansive spatial field without beginning or end. 'Spatial cities', by the Hungarian architect Yona Friedman, further visualises an imaginary metropolis, floating above existing cities and giving its inhabitants the option to freely relocate their abode. One inhabitant could bring their individual section of the city with them and live in Shanghai, Tokyo or New York, all at the same time. These 'spatial cities' create an open labyrinth with the possibility for relentless experimentation.
'The Deconstructed City – Creating a New Syntax' brings us from the late 1960s to the 1980s, during which time the proliferation of cross-disciplinary collaborations between architecture and other art forms flourished. Challenging the existing language of architecture, particularly its forms of expression and ways of working, is the underlying theme that connects the various experimentations. Groups such as Superstudio and Archizoom combined architecture with other artistic forms, producing work based on a confrontation with other traditions, rather than the actual physical construction of buildings. In the late 1980s, this reconsideration of the fundamental definitions and conditions of architecture was further challenged by the appearance of Deconstructivist architecture that revolved around the literary works of French philosopher Jacques Derrida. Architects such as Peter Eisenman, Bernard Tschumi, Daniel Libeskind, Zaha Hadid and Frank Gehry (just to name a few) dismantled traditional forms, reinterpreting them in the pursuit of a new architectural language. At times, their works seemingly defied the laws of gravity with their striking visual forms and were particularly inspiring for students of architecture.

Every aspect of modern society is affected by advances in technology and architecture is no exception. 'The Contextualised City – A Computerised Symbiosis' examines how the evolution in material engineering and computing technology has affected the way architecture is designed in this new era. It features the work of some of the most exciting architects today, including Diller + Scofidio, Asymptote (Hani Rashid and Lise Anne Couture), R & Sie (François Roche & Stéphanie Lavaux), Shigeru Ban and NOX (Lars Spuybroek). The 'non-standard' architecture of the digital era has replaced the 'standard' architecture of the industrial era. This exemplifies the ability of architecture to engage in a dialogue with its environs, absorbing and embracing new influences and thereby creating new relationships and contexts.

This exhibition demonstrates the rich creative possibilities of architecture, signifying that it is not only about what is built, but that it is also a conceptual trajectory. By relating to concepts from heterogeneous disciplinary fields, one would be able to relieve architecture from all formal association and open it up to its future development amid the greater social and political environs. Here perhaps lies the true meaning of avant-garde architecture - to relentlessly conjure up new possibilities of living. To the brave new world. 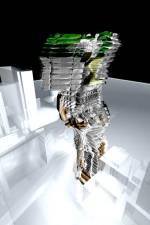 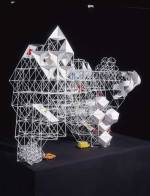