Awesome the group has been, for they have become a 20th century phenomenon. The total revision of architecture since the 1970s could not have happened so readily without this exuberant, intellectually fizzing, irreverent band of six. It was a long haul, and could not have happened without a remarkable, ingenious and dogged persistence to hold the course. The group, or at least those still alive in 2002, received the Royal Institute of British Architects (RIBA) Gold Medal for Architecture, indissolubly as a group. Sadly, Warren Chalk died in 1987 and Ron Herron in 1995 but Peter Cook, Denis Crompton, David Greene and Mike Webb collected the award.

But what has been their contribution to posterity? This powerful and revealing exhibition summarises, for the years 1961 to 1974, the strength, veracity, and inspiration the group provided to the European and global architectural community. The essence of this exhibition was first shown (launched seems to be a more appropriate word) in the Vienna Kunsthalle, in 1994. It has had a number of limited showings in other cities since then. And after the current show at the Design Museum in London, it moves across to Japan.

It has been said that the Archigram exhibition is the best exhibition ever held at the Design Museum. Crossing Tower Bridge, looking back at the city skyline, as one steps down one level to Shad Thames to reach the venue, wicked thoughts stray across one's mind. Looking across to the North Bank, the phallic Swiss Re Tower, by Norman Foster, jingle jangles, hiding its unrecognised roots for today's consumerised public. Few would draw the valid connection with Archigram's inspirational city view:

Returning from America, some young English architects knew that they could, and should make an architecture that was of the future - now … Archigram emerged as the mouthpiece of this philosophy, Richard Rogers and Norman Foster emerged as its fashioners and engineers, Peter Rice and Anthony Hunt emerged as its boffins. There was no need for a detached avant-garde: time for that could not be wasted if the future was really to happen - now.
(Peter Cook, The Architectural Review, July 1983)

Just over the shoulder of Swiss Re stands the still shining Lloyds building by Richard Rogers, the other leading architect of the interim period who, it has to be admitted, also drew inspiration from Archigram.

Posterity stands quaking, and ready to forget such original sourcing today. One is tempted to indulge in the historian Andrew Roberts' party game of 'what if … '. What if Archigram had got off the ground really fast with, say, The British Library project, or latterly Tate Modern? But there were impassable constrictions in British Architecture, which readily delayed progress until the 21st century. So, 'they not got much built,' and we can only look now at what they engendered among others. Whatever the setbacks, their position in history stands irrevocably firm, unassailable now - unlike the way in which numerous of the so-called Po-Mo pattern builders are already disappearing into oblivion, for all the building they did.

Finally in this resumé, we must offer a word about their intellectual sponsor, the late, great Peter Reyner Banham. Banham was the mentor of so much that has lasted - such as Archigram - as well as of much that we do not regret in passing - Brutalism for example, an especially English fetish. To fully understand Banham's prophetic contribution, and its sustenance, one need only find a copy of his brilliant The Visions of Ron Herron (Academy Group, 1994), which traces the meteoric progress and superb graphic skill of but one of the contenders.

The exhibition at the Design Museum also contains a nostalgic but nudge-nudge facsimile of Archigram's actual original work space, ('office' would be too much of a euphemism), there amidst the Rapidograph pens, discarded Letraset samples, and Barbour Index rejects. Many studio reconstructions by curators convey to the public a lack of authenticity, but this collision of primary colours has the ring of truth. Peter Cook and Dennis Crompton made sure of that, assisting curator James Peto in achieving maximum authenticity.

The exhibits, since the Kunsthalle, Vienna extravaganza of 1994, have reduced in number. Some of the models have gone but the show, as compressed into the first floor galleries of the Design Museum, retains all the powerful impact of the seminal content that has in this form travelled the world. The exhibition rivals that in Paris, which followed Vienna, although the location there within the Pompidou Centre, served as a reminder of the powerful influence Archigram have had on their contemporaries.

The visitors seem to divide into two main groups. First, the curious from the generation that came after - those who were quite deliberately disengaged from all this charisma by their seriously job-oriented practice-builders of the 1970s, and in this group must be included the post-Venturi rationalists. Curious, in this Proustian time-slip, because they stand wondering where it all passed them by. Then, there is the new generation of students, from up and down the country, who examine ruthlessly the superb technique of Herron, Cook, Crompton et al and find it to be a prediction of so much that has happened since. Prominent here are Peter Cook's and Colin Fournier's students from the Bartlett School of Architecture, University College London as well as bemused Architectural Association students (who realise now that it did not all happen at the AA, but only briefly in passing there). In addition to these blocs, there are the history/theory aficionados, who now realise that Archigram has been a major milestone in the development of architectural awareness throughout the 20th century. Many of these are European or Japanese, engaged in a searching enquiry as to where and how British architecture lost the plot. Dominating one end wall of the galleries is the vast reproduction of Ron Herron's 'Walking City' (1964). Finally, providing a superb, green climacteric at the final wall before one leaves the exhibition is Peter Cook's dramatic pointer of the way into an environment of total, built-but-growing landscape, 'Sponge City' (1974). This constitutes a mural of several panels, over two metres high at the two peaks, and some five metres long. This last exhibit shows, as never before, that Cook anticipated always in his work the way in which the future must happen now, 'Now' (then) was 1974, and Cook was typically forecasting the many possible ways in which cities would be absorbed within the growing landscape. This is precisely what we find beginning to happen in the 21st century.

The five original Archigram (Chalk, Herron, Cook, Crompton and Webb) members were uniquely visionary, in a manner not seen since the Russian Constructivist, or the related Italian Futurist Movement. But their documentation was dramatically superior to both, as Banham knew. There was here no political agenda, but a distinctive brand of youthful realism fuelled by an unbreakable group dynamic. Yes, as Arata Isozaki said, shockwaves they make. And so will continue to do.

But, there is a deficit. Architects still fail to acknowledge this work to the extent that they ought. Theorists are still defensively dismissive. The Big Book on Archigram, steered along as an initial project by Dr Sutherland Lyall (endless meetings with Butterworth-Heinemann in the late 1980s) could still happen. And meanwhile, the Archigram Archive has been miraculously preserved, extended, and curated by Dennis Crompton with Lyall in waiting. It is fortunate to be still in this country; it could be at risk, but at least a majority of the members are still around, complete with Gold Medal. 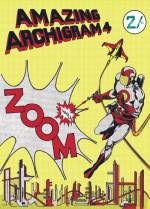