The USA has lately found and recognised the real successor to Frank Gehry in a new generation. This is New York-based artist Steven Holl. It has been some while in coming, but with the opening in June 2007 of the Bloch Building, adjunct to the Nelson-Atkins Museum of Art in Kansas City, Missouri, Holl can be lionised as a result of this inescapably iconic piece of architecture that stands at the highest international level of acclaim.

This $200 million transformation is a masterly landscape composition in which the surrounding parkland folds seamlessly over the galleries. There are five glazed 'lenses', which are constructed of structural glazing elements (no supporting frames), creating for the galleries below a pure white light shafted into the new exhibition spaces.

Holl has just completed another fine building in Cathedral Avenue NW, Woodley Park, Washington, DC. It is a residency for the Swiss ambassador, where his use of similar blocks of translucent glass has been pioneered, all set within a neat box of charcoal-stained concrete. Here, the evident tonal colour disposition of the glazing scheme ranges from white and milk-like casts, when the sun is shining down, to variable grey tinctures on a dull day. Holl has formed this building, incidentally, to replicate the emblematic white cross on the Swiss flag. The national symbolism is fundamentally grounded in America, however, by a diagonal axis opening across the building to a distant focus on the Washington Monument.

In 2001, Holl gave an invited lecture to a Finnish and US gathering commemorating the establishment of a new initiative to raise US awareness of the restoration of an iconic 1930s library building by Alvar Aalto, now under restoration in Vyborg, Russia (previously known as Viipuri and belonging to Finland). There could not be a more appropriate US architect to be a member of the international committee. Significantly, Holl himself has emerged as a major admirer of Aalto, Finland's pioneer modern architect, and a close look at Holl's earlier buildings reveals this affinity. In 1998, Holl had designed 'Kiasma', the new Museum of Contemporary Art in Helsinki, together with Finnish architect and philosopher Juhani Pallasmaa. In that year, Holl was awarded the internationally prestigious Alvar Aalto Medal and, in 2002, the Smithsonian Institution awarded him the National Design Award for architecture. He was specifically recognised for his development of the quality and ethos of materiality in building design. Just prior to this, Time magazine had thrown their hat into the ring naming him America's best architect.

However, the collaboration with Pallasmaa was important. Holl absorbed much of Pallasmaa's philosophical interest as an architect, writer and teacher expressing a phenomenological way of thinking and designing (focusing on human physical engagement with 'site'). As is common within the architectural profession, it has actually taken Steven Holl some while to get established - he began his firm in New York City in 1976. Now aged 59, he grew up not in New York but in Bremerton, Washington State (near to Seattle) and graduated from Washington University. By 1976 he was also undertaking postgraduate work at the Architectural Association School of Architecture in London. By 1989, the Museum of Modern Art, New York, had given Holl a joint exhibition with Emilio Ambasz (from which they purchased several of his drawings). The act of drawing has always been fundamental to Holl's creativity as an architect, accompanied by a superb colour sense and experimentation.

Holl became a tenured Professor at Columbia University Graduate School of Architecture and Planning from that year (having been an adjunct professor there since 1981) and has also taught at Pratt Institute, NY, Pennsylvania University, Philadelphia, and at Washington University in Seattle. Holl's involvement state-wide as an architect in the US has been significant and he has won over 12 American Institute of Architects (AIA) awards interstate since 1985.

A clear emphasis on materials has been a continuing strand of the steady development of Holl's career and practice, since 1980 at least. A house for Leon Rosen can lay claim to being Holl's first significant work, described by Kenneth Frampton as 'a megaron … capped at one end by a glass pyramid'. Sand-blasted glass and green antique marble characterise the building. Frampton rightly points out that, 'two fundamental principles served, and continue to serve, as the mainspring for Holl'. The first is the integration of the building with its site. But Holl believes that the architect has as much of a responsibility to challenge the morphology of a site as 'to harmonise with its apparent attributes'. (This is particularly true at Nelson-Atkins.) And second, says Frampton, Holl reveals a continuing imperative to integrate the form of any building with its phenomenological presence. In such terms, Holl seeks to transcend the modernist legacy.

Holl can be likened in this vein to Swiss architect Peter Zumthor in his awareness of the power and subtlety of light itself when related to the materiality of buildings. The Kiasma Museum of Contemporary Art occupies an inherently awkward site, transgressed by other narratives and their agendas, but Holl resolves the underlying dilemma by drawing out key axes of context and 'interweaving' them. The first direction is a cultural one, running past parliament and the National Museum to a climactic focus on Alvar Aalto's Finlandia Hall. The second is directed by the natural axis running far across the waterscape of Toolo Bay there. Two orthogonal blocks are intertwined in the new building as a result, creating a discrete segment of intervening space. Ramps inserted by Holl articulate human movement through and out of this space. Holl deploys internal shafts of light in emphasis of this core, which allow natural light to flood into the interior.

Subsequently, Holl has designed a competition-winning scheme for a residential area in the Taivallahti area of Helsinki. This will comprise 49 apartments. The 180 metre-long glass building has a height that rises from two to seven floors. This 'Meandering' (the actual name of the scheme) runs across its own courtyard (the scheme is carried out in collaboration with Helsinki architects Vesa Honkonen).

Steven Holl has defined his approach to the Nelson-Atkins building. 'It's not an object,' he says, 'you can't compare it to anything like Bilbao or all the generations of Bilbaos. The only way to see it is to move through it.' Holl has designed user-friendly spaces in the galleries with walls ten to 15 feet high, which start to 'billow' with curves and canopies towards the light. The pavilions descend gently down a slope designed by Dan Kiley in 1989, either buried or 'bermed'.

Holl has consolidated his international status, with projects in Amsterdam, Beijing, Switzerland and Helsinki, as well as in nine US states. He is now the one to watch. 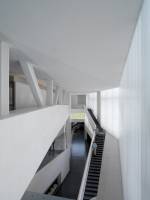 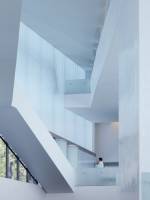