Towers: from Manhattan to Moscow

Towers: from Manhattan to Moscow

Renzo Piano's New York Times Building, situated on 8th Avenue, Manhattan, was opened this month to considerable approval from New Yorkers, architects, critics and particularly the press, who will work within Piano's superb spaces. The tower is 52 storeys high. Being in the centre of Manhattan, the architect and clients have wisely sought to create, in this context, a classic variant of the traditional skyscraper format for which the city is so famous. However, the walls comprise a sunscreen of 186,000 white ceramic rods, sheathing the vertical mass. Internally, Piano has achieved a cool style, a well-suited contrast to the fevered urgency that characterises reporters and journalists in transmission. The first thing that strikes one entering the building at the lower level, however, is the complete absence of serious noise. Telephones don't ring any more, but flash - screens likewise, and keyboards seem to be silently fingered and tapped. The discreetly landscaped second lobby gives onto a courtyard where silver birches abound, fast growing, but emblematic of the 'green' philosophy that can be sustained even in a skyscraper. This silence is more akin to that in the New York City library periodicals reading room.

There are 24 elevators that take one up through this shrouded and understated symbol of twenty-first century high technology. At roof level there can be found two curiously rustic water tanks, circular wooden containers that reflect a New York City tradition beloved of city engineers and planning authorities. Piano is on record as clearly regretting the impossibility, in a security-conscious climate, of the New York Times establishing a restaurant at this level together with a viewing platform, which would be dramatic. Piano is realistic, given these times post 9/11, about the many technical constraints weighing in upon an original designer such as himself quite apart from 'green' provisos affecting the definition of environmental design. Pragmatically, he has, however, still proven his ability by designing a skyscraper masterwork in a cool and classical style, which celebrates perfectly the Manhattan skyscraper for 2007.

The selection of the international architects Robert Matthew, Johnson Marshall (RMJM) to design and build a sculptural tower four kilometres from the Kremlin has sent the pigeons fluttering and the cranes flying. This highly crafted, sculptural tower could fulfil, in a Russian context, the 21st century dream of an urban icon. The City Palace, as it will be named, has the backing of Moscow City, who will themselves establish, within the 45-storey tower, new registry offices for Moscow city centre, with multi-use office development, public space and retail space on a lavish scale.

But what is especially original about this project is that it demonstrates the wish of the City of Moscow to become a lead player in the international stakes governing high-quality financial environments. This ambition is expressed in a unique way for today, in a close collaboration between Russian and British architects, and artists engaged from the beginning of the design process to work together in the generation of original designs. So this tower has a readily expressive form, and skin, which involves a glass lattice, made of translucent crystal.

Three key individuals have come together to create this masterwork: Tony Kettle, of RMJM; the British architects Karen Forbes, head of the school of painting and drawing at Edinburgh College of Art (Edinburgh University) and Philip Nikandrov, director of the RMJM offices in St Petersburg and Moscow. The eventual result has been a tower with a wholly original and sculptural profile, taking one back to the constructivist dreams of Lissitzky, Rodchenko, Tatlin and Melnikov, of which images swept the world. Melnikov's works still stand in contemporary Moscow, an inspiration to twenty-first century architects. The genesis of this new tower can therefore be said to be wholly of Russia. The tower will move forward again this amazing historical trajectory. Ironically, there stands today in Colin St John Wilson's new British Library, a tall vertical sculpture entitled 'Spiral Sheaves' (in the conference centre stairwell) which has a similar weaving form to that proposed now for 'City Palace' in Moscow. This building could well come to represent for Moscow in the 21st century what the Sydney Opera House did for that city in the 20th century: a contemporary global 'wonder of the world'. The surrounding landscaping recognises the context of 'urban theatre', with broad waterfalls and wide ranges of staircases and steps, building in that horizontality which so permeates and defines the Russian landscape outside Moscow. Striated bands of variegated stone create the sense of reference for the plaza, relating to the orthogonal grid of the original master plan. A route is established tracing down from there to the river embankment. Architecture is thus linked back to nature. The podium has its own split-level landscape development. The soaring poetic of the tower as a 'gateway' building will directly address the approaching and more distant public.

The floor areas in the tower are ingeniously rotated by a uniform three degrees at each level, around the common central servicing core. Eight load bearing columns and four external corner columns make this secure and feasible, going with the 'twist' of the building. Where a tracery forms the square templates of the tower, Karen Forbes herself evolved just such a workable tracery, from hand-drawn originals, which removed the need for any computational formula to be applied in the calculation. This solution is particularly successful as a result. Overall, there is a sense of alignment both at lower levels and up in the tower levels, with the river as it flows past the site.

This superb tower must now be built. It marks the emergence of a new and brilliant, creative and commercial Moscow upon the world landscape, the fruit of a positive and potentially long-lasting international collaboration. Beyond Manhattan, here is the way for the future. 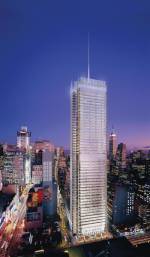 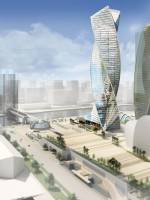 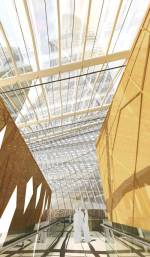 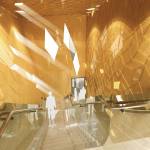 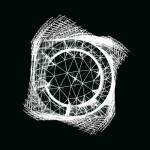