Swiss Re, a lovable gherkin in space

Swiss Re, a lovable gherkin in space

'If you seek his monument, look around' - such was the epithet chosen by his son, for Sir Christopher Wren, the architect of St Paul's Cathedral and so much else in 17th century England.

And today it is increasingly appropriate, too, in the case of Sir Norman Foster, Lord Foster - where London is concerned, his work surrounds us. His Mayoral office building on the South bank opposite St Paul's, has established an appreciative following. The central courtyard of the British Museum has transformed circulation and space from the claustrophobic corridors which characterised its core learning resource prior to Foster's replanning and redesign there. In the City of London itself, St Mary Axe, the ancient thoroughfare where stood the Baltic Exchange has been transformed by stealth (not always Norm's way) to accommodate the massive yet inimitable Swiss Re Tower.

The building opened formally to its occupants in April but already there are admiring neighbours, reconciled to 'something different'. The 'Gherkin', as it has been dubbed, displays precisely those characteristics, quite rarely experienced, which draw public sympathy, even affection for works of architecture. There have been no traumas, simply a growing acceptance in the City of London of the presence of the tower. One reason for this could be Foster's skill in manipulating the base of the tower into the street architecture. Unlike most towers, the lower floors are smaller in area than those above immediately above, allowing a tapered effect. The tower thus develops a waistline (not uncommon in an area where the business lunch is still a treasured part of protocol) - before soaring upwards towards the apex, tapering elegantly in space.

This is a skilfully orchestrated game of light and controlled reflection. There is greater daylight penetration at ground level. At 'waist' level the main advantage of the tapering is that the most populous floors are more spacious, not less, per individual. And the tedious effects of solar reflection are minimised as the tower rises to its apex. Such magic was not feasible a generation ago, and the evolution of the design has been greatly aided by the various digital tools deployed in the design office. The new technology applied permitted the universally curved surfaces of the elevation to be feasible as individual flat panels, thus greatly simplifying construction. Rising to 180 m in height, as a process was again made feasible by the use of a peripheral diagrid, where all the steel elements subtly interlock. This underlying 'stiffness' in the external diagrid means that the actual central core can function only as an element supporting applied loads, and not needed to provide diagonal bracing - which in turn allows greater flexibility when it comes to the floor plates. It is good to see again a harmonious interaction between Foster and Partners and the engineers, Arup, without whom the project could not have been resolved. The travails of the Millennium Bridge and its wobble, also a joint operation, seem left far behind.

Looking across from Shad Thames on the South side of Tower Bridge, Swiss Re seems to have been effortlessly absorbed into the skyline, as if it was always intended to be there. Perhaps this is the true achievement of the tower, that it complements handsomely the existing line-up, as if grown out of it from below rather than imposed (as are so many point blocks) from above. Yet there was a heavy battle in negotiation with city planners before permission was obtained. Foster had to circumvent the well-worn attitudes and alarms of a planning authority increasingly sceptical of architectural tricks and devices designed to worm their way through the regulations. The visual profile finally arrived at seems unwittingly to tug at old 20th century threats become safe: the profile of an airship on its side, or the tapering form of a First World War ballistic shell, or the deadly V2. But all this neutralisation has somehow generated, by association, a knowing public recognition and acceptability - as with wartime songs, Siegfried Line and the rest. Association has always had a role to play in the way we are first confronted by, then reconciled to, images. Swiss Re is a benign force on the street.

Internally, Foster has skilfully subdivided the tower with six triangulated, externalised atriums which provide six orthogonal bays, making the scale of the spaces internally less overweening. Then the whole idea of' 'transparency' has been advanced cleverly by rendering the process one of reflectivity rather than impacted surfaces. The result has been to give the gherkin a more substantial, less permeated characteristic than that first floated before the planners.

And what happens as we rise towards the apex of Swiss Re? A brilliant restaurant space opens up, reserved for staff and their guests, with a view of London that is almost unsurpassed. This is a building perfectly contextual for a London City predicated upon the vision and designs of Sir Christopher Wren after the Great Fire. The more one thinks of it, the closer the parallel between Wren and Foster seems. Wren was the architect of his day, a mathematician and astronomer, who most aligned architecture with the advance of science of his time. The same is true of Foster, who has lifted architecture forward out of the quagmire of history-based theory, into a stratosphere of its own, marrying engineering, computer science, sustainability, and pure architecture: yet he does not go blind on contextuality. It is all there.

The only problem, a small cloud on the horizon, could be that there is always a Nicholas Hawksmoor emergent in the footsteps of a great architect. Who now might be Foster's Hawksmoor? He need not worry quite yet; the chances are such a threat has barely left school.

Swiss Re arrived stealthily on the London skyline, the product of protracted negotiations between the clients and Foster, and then the planners. This was to be expected in the light of such a revolutionary building. The whole idea of the city tower can never be the same again. This is truly of the 21st century, and a worthy addition to the new London. 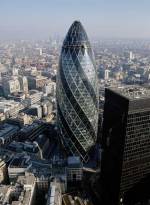 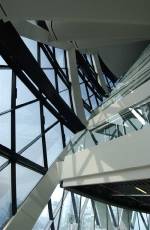 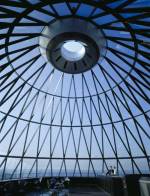