Louis Vuitton first started as a manufacturer of expensive luggage and bags. Over the years, the company has ventured into the greater world of luxury and came up with a range of products that is a direct equation to status. They signify a blend of both upheld tradition and latest innovation. In addition, Louis Vuitton has also established a design-led tradition of working with artists, designers and architects to expand its repertoire of products by building on the existing and venturing beyond the recognised image. Philippe Starck, Ross Lovegrove, Hartmut Esslinger and, most recently, Takashi Murakami have all been drafted in to give the product range a new boost with their own signatory flashes.

As a closest representation of their brand philosophy, the Louis Vuitton stores have been the natural spokesman for the brand, communicating the quality of the products to a wider audience. The latest addition to the family is Louis Vuitton Roppongi Hills - a collaboration between architect Jun Aoki, interior designer Aurelio Clementi and design head Eric Carlson of Louis Vuitton Malletier. Opened in September 2003, the store sits on an eye-catching spot along the Keyaki-zaka and fronts the main arena of Roppongi Hills development. Contrary to the freestanding building in Omotesando (opened in 2002) also designed by Aoki, this store is housed in an existing shell. This is also the first time where the shop interior steered away from the familiar formula and propelled towards a more abstract one that still communicates the brand philosophy. The new image still uses materials that the company has defined itself over the decades in but in a freer and bolder ways that relate more closely to the exterior when compared to the Omotesando building. The collaboration between the three designers has produced a delightful piece of work that is thorough in revamping the brand's image.

When compared to LV Omotesando, which is like a grand lady donning her shimmering metallic dress, LV Roppongi Hills takes on a funkier mood which is suitable in Roppongi. Designed by Aoki, the faÁade explored another composition of the moirÈ pattern. The two-tiered faÁade is 36 m wide and 12.5 m high with the upper portion resembling a monitor screen, on first look with its multiple reflections. It seems to be comprised of thousands of circular metallic plates reflecting the surroundings. On closer look it says otherwise - it is a double-layered façade with an exterior glass surface and another layer of 30,000 glass tubes of 10 cm diameter with mirrors inserted in between them. In the day, the Louis Vuitton logo appears as black alphabets amid the background of glass tubes. When night falls, the logo appears as silhouetted alphabets floating amid a sea of light from the interior. Bearing a distant echo to La Maison de Verre by Pierre Chareau, the multiple reflections of the individual components rendered the façade a constant ambiguity despite the transparency of the material used. It creates the effect of a mirage, assimilating a pixillated monitor screen. One could not see the products inside the shop clearly. By revealing yet concealing, it attracts the eye and arouses curiosity.

Roppongi is associated with nightlife. Therefore the interior has the atmosphere of a nightspot. Once inside, the double-height store space at the front welcomes customers and fans. Moving and changing photographic images on the floor shimmer and flicker like disco light. Enabled by fibre optics that emit light through the many tiny holes drilled on the stone slabs, they made the apparent solid surface appeared to dissolve. This theme is further carried right down to how the merchandise is presented to the customers. For example, bags are displayed vertically in the 'Bag Bar' as if they were bottles. Customers sit on bar stools to consider their choice.

Furthermore, the two-level, 900 metre-square store has the LV symbol, the monogram, stamped all over it. The motif is repeated thoroughly throughout as a detail in different scale at different location. For example, the spaces are divided innovatively by a skin made of intertwined stainless steel rings that form the monogram geometric floral pattern. Metal rings in the watch department again reflect the monogram design.

Taking only 15 months from design stage to completion of the store, Aoki, Clementi and Carlson had succeeded in creating a new image for Louis Vuitton. The material used - glass, bronze, stone and wood - follows the Louis Vuitton style codes and the monogram motif is reinforced in all levels of design details. The sensitivity and attention to details that ultimately communicate the long established brand philosophy in a new innovative way is the greatest merit of this design. 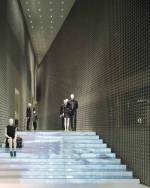 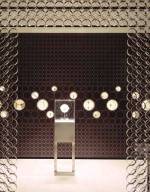