Home and Garden: Paintings and Drawings of English Middle Class Urban Domestic Space 1914 to the present

Home and Garden: Paintings and Drawings of English Middle Class Urban Domestic Space 1914 to the present

On 20 February 2007, a remarkable exhibition opened at the Geffrye Museum in East London, accompanied by an excellently researched and produced catalogue. This venture is as rigorously defined by the curators as its title implies, but to the proverbial 'visitor from Mars' it provides a superbly informative and revealing investigation, anthropological in its scope and yet rich in contemporary art.

Many of the painters whose works have been included are among England's best-known luminaries. Most important, however, is the way in which this exhibition provides a superbly researched investigation into what has constituted a certain world of 'civilised' London social life; partly, but not always, related to the usually quite modest interiors and adjacent gardens of a creative middle class. Many of these views are privately conceived and arranged, and all are documentations of an 'acceptable' life with its own codes and 'mores'. It is no accident that the majority of the sites are in North London.

The museum context for this exhibition runs back into the 18th and 19th century epochs, forming parts I and II, which preceded this particular 20th-century component at a short interval. Likewise, there will be a part IV, running from 16 October 2007 until 2 February 2008. This whole is therefore a massive entity, and opens up a seam of well-correlated English life that tells us more about a small, localised creative section of society. The series of catalogues for these 'parts' are also an invaluable source of reference, not least about what went on behind the curtains of North Camden, Hampstead and points East. The current exhibition, part III, 'Home and Garden: Domestic Spaces in Paintings from 1914-60' shows, as for previous periods, how these groups imaged themselves. It also focuses on, as in the title, the domestic spaces they occupied, as well as the various influences and behavioural patterns of individual families, as identifiable and defined each within its own peer group. It should be recalled that recently covered on the Studio International website was their exhibition entitled 'The West Indian Front Room: Memories and Impressions of Black British Homes', which provided a penetrating appraisal of similar family preoccupations in East London, post-war immigrant families 'at play' with fine anthropological detail. This much more comprehensive exhibition of a domestic mise-en-scène for a class that would consider itself socially somewhat superior, reveals the same painstaking scholarship.

This third instalment on the broad theme of 'Home and Garden' reveals an urban middle class and their living patterns (as captured in one exposure). Many of the families have incorporated small gardens into the living rooms, scenes of spatial definition or indeed of anarchy, broader creative influences and individualised behavioural patterns. Geographically, the painter groups emerged differently, as the London Group, the Bloomsbury Group or the Camden Town Group. Vanessa Bell's 'Interior with Duncan Grant' (1934) consciously evokes the interior and attitudes of the 1930s. From the 1940s, a rich documentation is provided by a broad canvas spread of 'The Burleigh Family Taking Tea' (CHH Burleigh, 1947) with the family members relaxing, distributed around carefully detailed Crittal metal windows (a new installation in the period) opening a whole wall of an older house and so bringing the garden into the living space, itself replete with furniture appropriate to such a family's taste. In fact, the furniture came from Heal's in Tottenham Court Road, as the catalogue explains. The Burleigh family are both exhibiting their contemporaneity and distancing from bourgeois social patterns as they see it, caught in the 'taking tea' emphasis in the title. The curtains are made of 'Old Glamis Fabrics', a dramatic charge of contemporary colours. The curators learnt this from the Dundee painter Andrew McIntosh Patrick as from the Fine Arts Society since his father had purchased such curtains in 1935 for his Dundee studio (the catalogue and its footnotes offer an unusually wide depth of detailed information of this kind).

Also included in the show is Paul Nash's 'Grotto in the Snow' (1939), which indeed looks more like an air raid shelter of the type being promoted in urban gardens at the start of the Second World War. By David Jones there is 'The Sitting Room at Howson Rd' (1926), which as the curators say 'captures domesticity as a site memory, as well as a site of activity which might be stifled by the presence of parents or super-egos. One is both child and adult in the same situation'. For the many creative individuals who have grown up in less than sympathetic households this can certainly remind of such experiences. By contrast, 'Sunday Afternoon at Church Hill' (1991) by Vincent York is a straight, non-reflective portrait of real people, apparently uncontrived.

David Hockney is represented here by 'Mr and Mrs Clark and Percy' (1970-71), now a contemporary icon. Victor Pasmore's famous 'The Gardens of Hammersmith No 2' (Tate Gallery) stands out subliminally as a masterpiece, although it seems to stretch a bit the museum's definition of the subject matter 'Home and Garden'. John Pearce, a relatively new talent on offer from the Francis Kyle Gallery shows 'North London Interior' (1999) as well as superb evocation of his own garden, entitled 'Brambles in a North London Garden' (2001). The late Patrick Caulfield provides a typically caustic note and is represented by 'Dining/Kitchen/Living' (1980) representing a sad menage of dysfunctional contemporary spaces, brilliantly discordant. This was to be an important inclusion but, sadly, the Tochigi Prefectural Museum of Fine Arts in Japan was unable to make it available, although it is rightly included in the catalogue.

Walter Sickert's 'Hampstead' (1913-14) provides a touchstone for the whole show. Quentin Bell had said, 'The great aim of Sickertian realism was to find beauty in the dull, the tawdry, the commonplace'. This sums up the ethos of the entire exhibition. But many of the views, especially of the gardens - and one should add the portrait subjects here - display their own aesthetic appeal anyway. The important thing was to be seen to be different as well, if this were possible. The curatorial team of authors, Judith Batalion, Charlotte Gere, Eleanor John and Christine Lalumia, are to be congratulated on their broad contribution and meticulous detail. 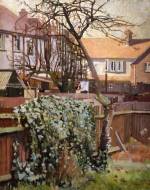 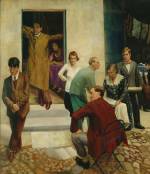 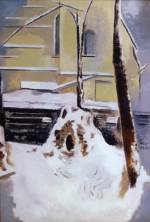