Awakenings: Zen Figure Painting in Medieval Japan, edited by Gregory Levine and Yukio Lippit, accompanies a major exhibition of medieval Chinese (Chan) and Japanese (Zen) figure paintings held at Japan Society in New York City (28 March-17 June 2007).* Like the exhibit - the first survey of medieval Zen figure painting by a US museum in more than thirty years - the catalogue is an important component in recent study and critical debate of the history, function and characteristics of such works created during this pivotal period in the development of institutional Zen in Japan.

The catalogue editors, who co-curated the exhibit, take an interdisciplinary approach to examine the many factors contributing to the iconography and period-specific purposes of medieval Zen figure painting: artistic, literary, historical, cultural, religious and political. Levine is an associate professor in the Department of History of Art at the University of California, Berkeley; Lippit is an assistant professor in the Department of the History of Art and Architecture at Harvard. The result of their efforts is a meticulously printed, 222-page, full-colour catalogue with 97 illustrations of paintings from the twelfth through early-sixteenth centuries. To guide readers to subtle but significant details in the works, many images are shown in multiple views and scales. The 47 figure paintings, hanging scrolls and sets of painted sliding-door panels in the show come from collections in Japan, Europe and America and include a National Treasure of Japan and some granted Important Cultural Property status.

Essays by Levine, Lippit and Martin Collcutt, a professor of East Asian studies, who teaches Japanese intellectual and cultural history at Princeton, are followed by analyses of individual works by the editors and other contributors. Tracing the history of Chan/Zen from its roots in India to its development in China and, later, in Japan, the essays discuss key monastic centres, powerful abbots and important patrons. While the three contextual essays create a vivid picture against which the figure paintings can be examined, Levine's 'Two (or More) Truths: Reconsidering Zen Art in the West,' would be, perhaps, the best starting point for Westerners, including practising Zen Buddhists. Although, in fact, it is the last of the introductory essays, 'Two (or More) Truths' perceptively articulates the barriers to authentic discourse with works created centuries ago. What is true for the figure paintings - that they emerged from a highly specific set of circumstances - is true for contemporary notions of Zen and Zen art of all subject matter. Levine points out that popular understanding of Zen is an ahistorical interpretation based on a generalised ideal, spurred by the writings of DT Suzuki and other notable Japanese lay Buddhist figures. Assimilation of Zen in the West continues to be influenced by Suzuki and his followers, and by Americans who merely dabbled with Zen, such as the Beats.

Commenting on this 'modern Zen' that began circulating in the West in the 1930s, Levine writes that, 'this sort of Zen was formulated not solely out of the Chan/Zen past, but also in response to Western philosophy, psychology, theology and scientific rationalism.'1 He comments on the remarkably flexible nature of Western assimilation and the resulting pastiche, with echoes of medieval Christian mystic Meister Eckhart, American psychologist and philosopher William James and American philosopher and educator John Dewey. Today, it seems, everything from spas and sports clubs to cars and chocolate are advertised as exuding some elusive but seductive quality termed Zen. The challenge, it seems, is to bridge the gap between the genuine mystery within Zen philosophy, the elusive nature of enlightenment and a scholarship grounded in specifics of time and place.

The catalogue essays and commentaries skillfully handle questions of what makes a work qualify as 'Zen art' and how to look at it. As each contributor examines a particular work, he or she balances qualities of purity, spontaneity, 'no mind' and 'emptiness' to which Zen Buddhists aspire with an examination of style, subject and function. Figure painting within Chan communities began during the Song dynasty (960-1279) in China and spread to Japan during the Muromachi period (1333-1573). Eventually, figure painting became one of the most prevalent forms of Chan/Zen aesthetic practice. Stylistically, the paintings demonstrate that Zen figure paintings in Japan were influenced by Chinese Chan works and medieval Buddhist art as a whole, and that characteristics unique to figure painting in Japan developed over time. The figures shown in the works tell the story of a revered lineage initiated by Sakyamuni (the historical Buddha), carried on by Bodhidharma (the first Chinese patriarch) and on down to a cast of characters outside of, but closely associated with, official Chan/Zen history, such as arhats (awakened disciples of the historical Buddha), male and female bodhisattvas, Tenjin, an indigenous Japanese Kami (folk deity), poets and cult figures like Budai (Hotei, in Japanese).

Figure paintings played an essential role in securing the ideology of the 'special transmission', which distinguished Chan Buddhism from other Buddhist schools during the Song period. Rather than through study of the scriptures, enlightenment, in this conception, could come from direct transmission from a master. As such, authenticating a lineage and its masters was a paramount concern of abbots and their followers. Patronage from the scholar-official class was integral to the success of a monastery and its master, and figure paintings and their inscriptions were designed to appeal to this class. In Japan, the warrior elite showed particular interest in Zen. Monks used calligraphy (bokuseki, or 'brush traces') to convey stories or details of a patriarch's life, Zen philosophy, poetry, connections to an influential patron or funerary sentiments. Zen figure painting in Japan also detailed the interregional dialogue between Chan and Zen Buddhists, as Chan masters traveled between China and Japan, and Japanese Zen Buddhists began to study in China.

Readers will gain a solid understanding of the development and appeal of 'apparition paintings', stylistic differences between Chinese and Japanese works and subtle variations in images of favored subjects. Little is known of most of the painters, but catalogue contributors supply biographical details of the major abbots and monks who inscribed the works. One drawback to the catalogue design is that readers will not see the works displayed as beautiful hanging silk and paper scrolls and sliding door panels, as they are displayed in the exhibit and were viewed by medieval Zen monks, lay Zen Buddhists and patrons.

Academics, contemporary Buddhists and general readers with an interest in Zen will welcome Levine and Lippit's extensive bibliography on Chan, Seon (Korean) and Zen Buddhism and art. The bibliography includes exhibition catalogues, scholarly works and popular titles by Thomas Cleary, Arthur Whaley, Suzuki and Alan Watts. A concordance includes Sanskrit, Chinese and Japanese terms along with their kanji (Chinese) characters.

* The exhibition, 'Awakenings: Zen Figure Painting in Medieval Japan' was organized by Japan Society, the Agency for Cultural Affairs of Japan and the Independent Administrative Institution National Museum of Japan. 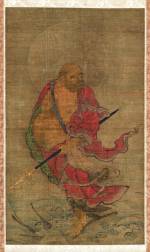 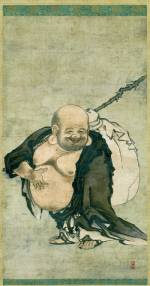 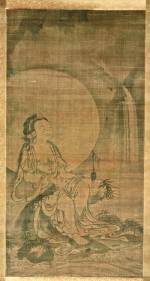