An Eminent Legal Scholar's Journey to the Floating World

The proliferation of Japanese-style comics (manga), rapidly expanding international audiences for them and large manga sections in bookstores might seem like a modern phenomenon but is rooted in hundreds of years of Japanese history and popular culture. The battles – intellectual, philosophical and physical – waged in twenty-first century manga reap a harvest sown more than a hundred years ago. Nineteenth-century ukiyo-e printmaker Utagawa Kuniyoshi (1797–1861) was the quintessential manga artist of his time. Like others working in the lucrative ukiyo-e field, Kuniyoshi's work catered to huge demand from merchant and artisan classes in Edo (modern Tokyo) and surrounding areas for images of landscapes, kabuki theatre and elegant courtesans. Kuniyoshi's work rises to the top of quite a heap of competitors; along with Katsushika Hokusai (1760–1849), Utagawa Kunisada (1786–1864) and Utagawa Hiroshige (1797–1858), Kuniyoshi will be remembered as a rare master of Tokugawa-era ukiyo-e.1

Prints in series and illustrated stories collected in volumes (gokan) were relatively inexpensive and widely available. Not surprisingly, quality varied over large print runs, and pirated editions were common. As such, modern collectors of uikyo-e prints have had their work cut out for them as they search for prints to complete a series. Evolving Tenpo Reform censorship codes from 1841–1843 resulted in prints being inconsistently marked with censor seals, prints issued without artist signatures to protect anonymity, and series abandoned by publishers to prevent prosecution. Depending on viewpoint, creating museum-quality collections of ukiyo-e prints presents a problem or an invigorating challenge.

For Arthur R. Miller, the journey he made while putting together his vast collection of Kuniyoshi's work has been life-altering. Now showcased in New York City at Japan Society, more than 130 of Miller's colour woodblock prints attest to the value of his efforts. As America's most celebrated legal scholar, Miller is known to American television audiences through nearly two decades as Good Morning America legal editor and in the UK from participation in BBC programmes. A prolific author, Miller taught at Columbia University School of Law, the University of Minnesota and the University of Michigan before joining, in 2007, the New York University School of Law faculty. In 2008, he donated his collection to the American Friends of the British Museum because, he writes in the catalogue foreword, his passion for collecting Kuniyoshi's prints began nearly 30 years ago with a visit to Richard Kruml's print gallery (now closed) near Brown's Hotel in Mayfair, London. Although brief, Professor Miller's foreword evokes the excitement he must have felt upon seeing Kuniyoshi's dynamically designed and coloured prints. At the time, Miller had never heard of Kuniyoshi and knew little about the ukiyo-e school. Subsequently, he spent time in London studying Japanese culture and art, meeting with dealer Israel Goldman and Basil W. Robinson (1912–2005), former keeper of the metalwork department at the Victoria and Albert Museum.2

Following his donation, Miller's collection had its public debut at the Royal Academy of Arts in London, the city he associates with Kuniyoshi.3 Written by Timothy Clark, head of the Japanese section in the department of Asia at the British Museum, the 340-page catalogue reproduces hundreds of prints illustrating Kuniyoshi's works in all ukiyo-e categories (warriors, beautiful women, landscapes, theatre) and his biting satire and sly humour in “crazy pictures” and “riddle pictures”.4 To fully appreciate Kuniyoshi's range, readers might prepare by looking through the catalogue, which is available at Japan Society. Superior production values and page layouts capitalise on the artist's bold style and support Clark's astute organisation. Symbols and subtexts formed a second language for Kuniyoshi's audience; contemporary viewers will be grateful for Clark's entertaining translations. His insights into ukiyo-e printmaking techniques; Kuniyoshi's graphic innovations (eg, triptych format); censorship protocols; and widespread discontent with the Tokugawa shogunate will help them to unravel Kuniyoshi's visual vocabulary.

From there, visitors' first encounter with Kuniyoshi in the galleries consists of a selection of archival replicas issued by the Museum of Fine Arts, Boston. With one of the world's largest collections of Japanese prints, the museum holds thousands of Kuniyoshi's works alone; thirty-six of these have been reproduced and offered for sale.5 Framed and displayed at Japan Society, the replicas are stunning. It does not seem likely that 150-year-old-plus prints could be as vibrant as these technologically produced wonders. But a happy surprise awaits, and no doubt some will gasp with the delight that, surely, Professor Miller felt in London decades ago. To find a niche in a fiercely competitive field, as well as from predilection and skills, Kuniyoshi pursued the warrior genre; such images dominate his production. In hindsight, scholars have determined that his prints of other subjects are on par. For instance, Clark notes that if not a prolific landscape artist like Hokusai and Hiroshige, Kuniyoshi ranked with them in skill: “Some of the views of Edo he produced in the early 1830s belong among the greatest of all Japanese landscape prints, their European elements and their eccentric subjects and viewpoints granting them a unique, piquant flavor”.6 Similarly, early in his career Kuniyoshi focused on comic images that attracted attention from publishers and consumers, though not as much as the series that brought him fame, 108 Heroes of the Popular Water Margin (1827–1830). Kuniyoshi's satirical and witty works (eg, cats forming written characters with their bodies and turtles with the crests of celebrity kabuki actors) exemplify the artist's unique yet accessible iconoclasm. The ingenuity with which Kuniyoshi used humour to navigate censorship restrictions demands admiration.

Japan Society actively cultivates visitors of all ages, particularly young adults who are the primary audience for manga. Many of the society's programs present contemporary Japanese culture expansively so that other generations can enjoy subjects and formats appealing to Japanese youth. A major part of the Spring 2010 calendar features a “mangaka-in-residence”, Brooklyn-based Japanese illustrator Hiroki Otsuka. The artist will participate in workshops for adults and children and create a full-length manga inspired by images in the exhibit. Visitors can view Otsuka working on his manga in the gallery at specified times and access new pages weekly on the society's website.7

Son of a textile dyer, Kuniyoshi taught himself to draw by copying illustrations appealing to a spirited child's imagination: ghosts and demons, samurai, animals, and fantastic creatures. Later, he studied with successful ukiyo-e artists but soon left to follow his own path. Kuniyoshi struggled and matured amidst volatile social conditions predicting a shift from old world to new. Recent studies date Tenpo Reform seals to chart Kuniyoshi's visual responses to censorship; draw parallels to European imagery and aesthetic conventions with which Kuniyoshi was familiar; and help to decode his “crazy” and “riddle” pictures. This research reveals a sophisticated, daring artist who must have enjoyed his thinly veiled rebellion.8 He is the boy who savoured and copied dramatic battle scenes between tattooed warriors and with denizens of the spirit worlds. Likewise, years ago in London Professor Miller responded with childlike wonder to the tales enacted on Kuniyoshi's stage. As it matured, Miller's collection became an outstanding gift to the artist as it preserves Kuniyoshi's lifetime achievements. For us, Miller's collection is a premium ticket to the floating world of Tokugawa-era Edo guided by a ukiyo-e master.

1. The ukiyo-e school flourished in Edo (modern Tokyo) during the Tokugawa era (1603–1867). The term ukiyo-e, or “Pictures of the Floating World”, plays on a concept from buddhism relating to the sorrow experienced on earth. In the seventeenth century, Japanese artists began to alter the concept of the sad “old” world by offering a visual bridge to the “floating world”, a place where humans could revel in the world's delights: kabuki theatre, beautiful women, lush landscapes and popular games.
2. Robinson wrote a number of books on Kuniyoshi. Miller funded and distributed Robinson's 1996 supplement to the author's 1982 monograph Kuniyoshi: The Warrior Prints.
3. With the exhibit Kuniyoshi: From the Arthur R. Miller Collection (21 March–7 June 2009), the Royal Academy of Arts participated in Japan-UK 150, a series of UK events organised to celebrate 150 years of association between these countries, funded by grants from members of the Japanese Chamber of Commerce and Industry in the UK and the Nippon Club.
4. Kuniyoshi: From the Arthur R. Miller Collection (Royal Academy of Arts, 2009) retails for UK40/US$80. “Crazy picture” and “riddle pictures” were among Kuniyoshi's pioneering contributions to ukiyo-e.
5. The Museum of Fine Arts, Boston, Archival Replica Fine Art Prints are available at: www.japansociety.org/mfaprints. A 10 per cent discount is offered with orders from the site until the show closes on 13 June 2010.
6. Kuniyoshi, p.181
7. For more information on Japan Society's programming and Hiroki Otsuka, go to www.japansociety.org
8. For example, Kuniyoshi disguised prohibited warriors (from the Tensho era, 1573–92, forward); cleverly subverted approved subject matter while avoiding official rebuke; and began decorating his seal with paulownia flowers as a clue to his admiration for blackballed samurai Toyotomi Hideyoshi (1536–1598). In Chinese legends, paulownia flowers are associated with the phoenix and immortality. As a symbol of royalty on family crests, the flower ranks just below the chrysanthemum. Hideyoshi rose from humble origins to lead the country and received approval to use the paulownia on his crest. See Heroes of the Grand Pacification: Kuniyoshi's Taiheiki eiyuden by Elena Varshavskaya (Hotei, 2005) for a discussion of Hideyoshi's popularity among the lower classes in Japan. 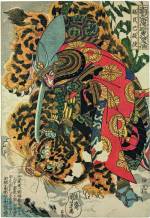 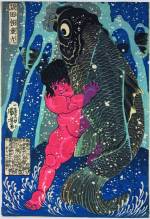 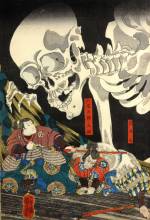 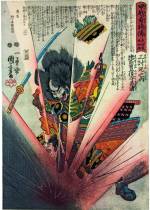 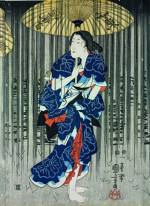 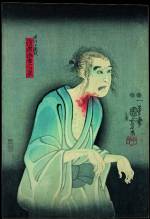 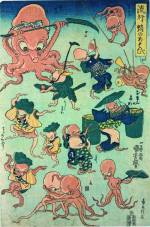