For those who did not have an opportunity to view the spring/summer 2011 retrospective of Italian fashion designer Roberto Capucci’s work held at the Philadelphia Museum of Art, this catalogue provides a visually spectacular survey of his career.1 Author Dilys E. Blum, senior curator of the museum’s Costume and Textiles department, and her editorial team have arranged the more than 80 examples in the show chronologically and dynamically to examine Capucci’s impact on the Italian and American fashion industries from 1951, when he began showing his designs in Florence aged 21; his transitional periods in Paris (1962–8) and in Rome (1968–79); and his focus from 1980 forwards on the inherent and manipulated sculptural possibilities of fabric.2 Capucci describes his creations post 1980 as “studies in form” inspired by fine art, architecture and nature.

Like the exhibit, the 200-page unjacketed hardcover catalogue (US$50/£35) serves two purposes. First, it provides a history of the modern Italian fashion industry as it emerged after World War II; developed through association with American department stores and manufacturers; survived fierce rivalry between Rome, Florence and Milan for top-billing as Italy’s fashion centre; adapted to changing tastes and trends at home and abroad; and weathered competition from a revived French fashion industry and a market-savvy American one. Capucci’s early career is inseparable with this history, and Blum skillfully navigates between his place within Italian fashion and the designer’s particular innovations, triumphs and concerns. More than half of the book covers designs from 1980 to 2007, when Capucci operated on his own terms and produced one-of-a-kind sculptures that, to varying degrees, can still be considered wearable fashions.

After being introduced to the international fashion press in July 1951 at Florentine aristocrat/businessman Giovanni Battista Giorgini’s second Italian fashion show, Capucci drew praise for his playful, modern sensibility. Along with Pierre Cardin and James Galanos, he was distinguished with Filene’s 1958 Young Talent Design Award. Aware that the Italian industry was not primed for mass production and distribution, he partnered with American companies to reach large audiences with inexpensive, line-for-line copies of his designs. Although Capucci was not a dressmaker, he understood the qualities that made Italian garments desirable: luxurious fabrics and expert tailoring. Building on these attractions, he added his own imaginative touches (eg geometrically constructed collars, jackets and overskirts; puffed tunics; harem skirts; knee-length pants peeking out from a gold lamé hostess dress) and pioneering silhouettes (the four-seam “box-line”, the “dove-line” and the sharply jutting “banjo-line”).

Capucci caught the wave of American interest in Italian products, which were showcased in festivals and exhibits and on television, and took it further. He made deals with American department stores, mail-order house Spiegel, David Furs in New York, Chandler Shoes, Maurice Handler knitwear, Joseph Love children’s wear and hosiery maker Bonnie Doon to produce affordable copies of his designs. A model wearing his influential and astonishing layered Nove Gonne (“Nine Dresses”) gown was photographed in the Roman Forum for a 1957 Cadillac Series 62 advertisement. Wealthy Italians and American actresses placed orders with his atelier. At home, he was called the “Givenchy of Rome”. In Paris he had been called “la petite Balenciaga”.

Blum explains that, by the late 1970s, the client base for Italian high fashion – wealthy private clients, film stars and American companies – had shifted: “Increasingly, Capucci became an anomaly as fashion buyers embraced ready-to-wear over haute couture….”3 By 1980, Capucci had achieved every fashion designer’s dream but was unwilling to tread the same ground in an age of quickly made, quickly cast-off consumerism. So, he decided to devote himself exclusively to art. From 1982 through 1994, he exhibited the results of his experiments with colour, fabric and techniques in grand spaces like the Palazzo Visconti in Milan (1982), the Italian Embassy in Paris (1984), the Park Avenue Armory in New York (1985), the Galleria Nazional D’Arte Moderna in Rome (1989) and the Schauspielhaus in Berlin (1992). His name was known to fewer people in the fashion world, particularly in the US, but now figured among influential contemporary Italian fine artists.

In 1970, Capucci had made his first trip to India. During his subsequent travels in East Asia, he studied traditional fabric-making techniques and came to admire the spare but elegant beauty of traditional garments. His intricately cut, folded, pleated and embellished designs might dazzle the eye, yet it is not difficult to detect a profoundly simple principle informing them, derived from the philosophy and crafts of the east. It is the same principle that one finds in natural forms. For example: Capucci’s 1982 silk velvet and silk gazar Arancia (Orange) evokes the lure of the fruit at its ripe, sweet peak, sensuously coloured, segmented and ready to eat. His 1985 pleated silk sauvage Fuoco (Fire) seems to burst into flame below the streamlined bodice; the skirt of a 1992 ocean-blue silk taffeta short evening dress ripples with sculptured waves; and a silk velvet and silk satin gown shown at Museo Della Fondazione Roberto Capucci’s inaugural exhibit in Florence (October 2007–June 2008) sprouts silk leaves.

Only a few examples in the exhibit and catalogue allude to concepts beyond form and fabric; for instance, Capucci’s 1965 Omaggio a Vasarely (Homage to Hungarian Op-Art artist Victor Vasarely), made of silk satin ribbons and ostrich feathers; the 1969 silk georgette and wool Omaggio a Burri (Homage to Italian artist Alberto Burri); the 1985 silk sauvage Cinema, a black dress wrapped in what appears to be film reels; and his 2007 pleated silk velvet and silk taffeta Spire (Coils), which has a sculptured sphinx-like face positioned at the waist.
Period photographs show Capucci at work and models wearing his garments. A c1952 photo of a model in his purple shot silk taffeta dress with trailing overskirt, standing on a circular outdoor staircase, could be a composition arranged by Alma-Tadema or Burne-Jones, while a c1961 photo of a model in Capucci’s cape-like Azalea Rosa sculpture dress, kneeling with gloved hands folded, echoes the position of a penitent. In an image shot in 1957, he is arranging his Nove gonne dress on American actress and competitive swimmer Esther Williams in his atelier in Rome. In another photo, a model wears a plastic “slip-covered” dress and hat from Capucci’s spring/summer 1966 collection. In fact, Capucci was the first designer to use plastic in haute couture. In the 1960s and 1970s, he worked with many other unusual materials. Inspired by the luminescent rosary beads he had seen displayed in religious processions, he used phosphorescent beads sourced from an Assisi manufacturer. He also used bamboo, raffia, natural-fibre rope, stones, straw and brass wire. His interest in natural and untraditional materials continues to this day.
Blum spotlights each of the designer’s creative breakthroughs leading up to what, at first, seems like a leap into a completing different orbit. Closer study of her text and the illustrated garments, though, reveals a thread linking Capucci’s designs from the 1950s to late-career fabric sculptures consisting of floral forms, herringbone patterns, geometric shapes, obsessive pleating, colourful flourishes and yards of swirling fabric.

In 1995, Capucci joined 18 other Italian artists invited to show their work at the Forty-Sixth Venice Biennale. The invitation marked and confirmed Capucci’s transition from designer to fine artist, but Blum’s catalogue makes clear that the designer’s roots in fashion run deep. The notion of “wearability” may be superfluous to Capucci’s designs after 1980, but the thought of slipping into one of his sculptures is tempting. Thus enrobed, the wearer would, indeed, be a work of art.

References
1. “Roberto Capucci: Art into Fashion,” the first major exhibit of Capucci’s work in the US, opened at the Philadelphia Museum of Art on 16 March and closed on 5 June 2011. Capucci visited the museum during the last week of the show.

2. Exhibited and illustrated garments come from the collection of the Fondazione Roberto Capucci, located at the Villa Bardini in Florence. 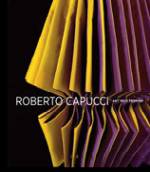