Book review: Maker of Dreams, the Mother of them All. Madeleine Vionnet, edited by Pamela Golbin

Maker of Dreams, the Mother of them All

Hall of Fame-status fashion designers have had their day or, more accurately, year in 2009: films devoted to Coco Chanel (Coco Before Chanel) and Valentino (Valentino: the Last Emperor) released internationally, a sumptuous Valentina monograph and New York exhibit,1 and a major retrospective in Paris for French designer Madeleine Vionnet (1876–1975), who Azzedine Alaia called “the source of everything, the mother of us all”.2 Among powerful designers crediting Vionnet's profound legacy are Cristobal Balenciaga (“Madame Vionnet is my master”); Karl Lagerfeld (“Everybody, whether he likes it or not, is under the influence of Vionnet”); Christian Dior (“No one has ever carried the art of dressmaking further than Vionnet”); and John Galliano (“Her tailoring has inspired generations of designers”). Reflecting the esteem in which Vionnet is held, such statements pale before Vionnet's forceful edicts; for example, a tribute to her own mentor, the Callot sisters: “Without them I would have continued to make Fords. It's because of them I was able create Rolls Royces.”

Since the 1939 closing of her maison, Vionnet has been eclipsed in fashion histories by more colourful contemporaries Paul Poiret and Chanel. Frequently, she is mentioned only in association with them due to shared commitments; for instance, freeing women from corsets and borrowing from modernism in the fine and decorative arts. Like Chanel, Vionnet came from the lower classes and carved a place for herself in haute couture through will and ability. She shared with Poiret a passion for copyright protection. (Chanel considered copies to be free advertising.) Unlike Poiret and Chanel, Vionnet achieved groundbreaking changes through technical mastery, from pioneering the bias cut to employing varying fabric thickness (crepe was her favourite) to express, rather than cover, the body. Cutting on the bias allowed Vionnet to elegantly drape fabric in sensuous folds, sparking a dance between figure, cloth and gravity. Inspired by Ancient Greek attire, classical sculpture and architecture, Isadora Duncan, contemporary theories of mathematical harmony, and many modernist movements (Le Corbusier and Ozenfant's Purism, Futurism, Cubism, Art Deco), Vionnet lengthened her list of innovations: the one-seam dress, halter top, handkerchief hem and cowl neck. Poiret was a grand showman: Chanel, a friend of modern artists, bohemian writers and expatriate musicians. As they paraded on the world stage, Vionnet remained at her desk, even as models displayed her wares for wealthy clients, journalists and foreign businessmen. The image of Vionnet working upstairs during seasonal showings sharply contrasts with that of Chanel watching every move while sitting on the stairs in her maison. Director Anne Fontaine recreated this classic Chanel pose to close Coco Before Chanel. As for Poiret, he placed himself and his wife directly in the action.3

Held at Les Arts Décoratifs in Paris, the Vionnet retrospective draws from quite a cache: a 1952 museum gift by Vionnet of 125 dresses, 750 patterns and 13,000 photographs and artifacts. Les Arts Décoratifs Chief Curator and catalogue editor Pamela Golbin spent two years preparing the show, aided by funds from French investment company Natixis. Part of these funds was used to restore 130 garments to their former glory. Released in English by Rizzoli in autumn 2009, the accompanying catalogue mirrors Vionnet's near obsession with precision, harmony, conceptual purity and material beauty. Unlike the exhibit scenography by French interior designer Andrée Putnam, with garments arranged on mannequins in typical, although artfully lit, manner, the catalogue pushes format boundaries.4

For her auspicious catalogue launching, Golbin concocted a breezy imaginative interview with Vionnet incorporating the designer's most memorable quotes. From the mid-1920s until she retired, Vionnet reigned as fashion's queen. Her clientele consisted of goddesses of stage and screen (Marlene Dietrich, Katherine Hepburn, Greta Garbo) and fabulously wealthy, well-cared-for women. These women served as perfect models for Vionnet's form-revealing designs. As in subsequent sections of the book, Golbin's interview is amply illustrated; here, with photographs of Vionnet in her office, working with employees, and draping fabric on a doll-size model; drawings from contemporary magazines; and a charming caricature by French illustrator Sem from the back cover of Le Nouveau Monde.5 Golbin also contributes a biographical essay relating Vionnet's experiences in London as fitter with Kate Reily and in Paris as apprentice to the Callot sisters and designer, like Poiret, with Jacques Doucet. Readers will also glean a concise history of Maison Vionnet from its 1912 founding, reopening after World War I on the rue de Rivoli, and a 1923 move to Avenue Montaigne. The factory-like compound on Avenue Montaigne was dubbed the 'Temple of Fashion', a term acknowledging Vionnet's status as haute couture's high priestess.

Next comes 20th-century decorative arts specialist Benjamin Loyauté's discussion of interior decoration at Avenue Montaigne, promoting Vionnet prominence in modern decorative arts. Influenced by Symbolism and Art Nouveau, French painter and designer Georges de Feure (1868–1943) did the interiors, selecting furnishings by stars of the high-style Art Deco and modernist movements. Vionnet furnished her homes in like manner, illustrated by a 1967 photograph of her townhouse in square Antoine-Arnault. Loyauté comments on Vionnet's liberality:

Vionnet's successful fusion of such far-flung influences in her uncompromisingly singular aesthetic proves the depths of her talent.

After studying Loyauté's erudite essay, readers might be ready for a bit of sensual gratification. Fortunately, next up is a visual tour of Vionnet's garments. Primarily shown on mannequins photographed by Patrick Gries (Van Cleef & Arpels; Evolution), the restored dresses are amplified by sketches and published drawings, photos from Vionnet's registration albums, and vintage images taken by George Hoyningen-Huene, André Durst, Man Ray and Horst P. Horst.

Readers might be excused for lingering over these photographs before turning to the closing sections of Madeleine Vionnet. Revitalized by the celestial beauty of every dress showcased, they will be rewarded for forging ahead with excerpts from French writer André Beucler's Vionnet biography. After signing a contract in 1930 with Editions Gallimard, Beucler visited Maison Vionnet for a birds-eye view. The unpublished work was part of a series of collaborations between a 'man of letters' and an industry leader. Beucler described Maison Vionnet as a beehive, swirling with activity as premières (head dressmakers), vendeuses (saleswomen) and clients moved between ateliers for dresses, furs and lingerie. If fortunate, their day might include a visit with the queen of the hive. Beucler also described Vionnet as a mother figure. Much has been written about Vionnet as enlightened employer. She provided on-site medical and dental care for employees and their families, maternity leave, inexpensive, nutritious lunches, training facilities and educational opportunities. Where Chanel, confronted by striking employees, shut her doors against their demands, Vionnet gave skilled workers reasons for company loyalty and, if not personal friendship, a model of excellence. One employee, designer Jacques Griffe, remembers his mentor in one of the book's closing essays. During the few years he worked for her, Griffe never met Vionnet. In later years, they developed a close friendship.

Madeleine Vionnet contains few personal glimpses of the woman who worked from early morning until long after closing time. We are told that she was twice married, but learn nothing about her husbands. Vionnet's goddaughter, fashion writer and novelist Madeleine Chapsal, offers the most intimate picture we are likely to receive of the designer. From Chapsal readers discover that she was a “nutritionist, Vionnet loved vegetables” and that she never forgot anyone in the Chapsal family, “not even Sophie, our little Scotch terrier”. But Chapsal's view of her godmother suggests that Vionnet never let down her guard:

“I only ever saw my godmother with perfect posture, straight neck, impressive demeanor, without a spot or a wrinkle, not a single curl out of place, her voice always admirably resonant, as befitted one who was entirely self-disciplined.”7

At the moment, Maison Vionnet is being revived by former Valentino CEO Matteo Marzotto. Given Golbin's expert handling of her subject, it seems fair to assume that omitting mention of the house's continued existence is intentional. Deploring the term ‘fashion' in its common usage, Vionnet began with a concept and followed it to purest material form. For her, the most direct route was simple, a rational relay from Idea to Expression. If, as Vionnet stated, artists make dreams, then her dreams are not reproducible. They are matchless works of art. After all, a Rolls Royce might be a car, but foremost, it is an ideal.

1. For Studio International's interview with Kohle Yohannan, curator of Valentina: American Couture and the Cult Of Celebrity and author of the exhibition catalogue, see 'Once Again, Fashion's First Beatnik Takes Centre Stage'.
2. Madeleine Vionnet, Puriste de la Mode, Les Arts Décoratifs, Paris, 24 June 2009-31 January 2010. The 300-page, full-color hardcover volume, Madeleine Vionnet, contains 280 photographs and retails for US$75.
3. Poiret introduced many of his designs as modelled by his wife, Denise, whose self-confident theatrics were trumped only by her husband's flamboyance. For Studio International's coverage of Paul Poiret: King of Fashion at the Metropolitan Museum in New York (2007), see 'Haute Couture's Grand Showman'.
4. Visitors to the exhibit are aided by digital screens displaying original sketches and photos from Vionnet's archives or published in period magazines. Setting another critical precedent, Vionnet left a comprehensive library of materials relating to each garment and the inner workings of Maison Vionnet.
5. One of Vionnet's dolls is displayed at Les Arts Décoratifs. Vionnet is shown modelling on one such doll on p.27 of the catalogue. Signifying her regard for designer Jacques Griffe, Vionnet gave him another miniature mannequin. He is shown draping fabric on the doll on p.290.
6. Madeleine Vionnet, p.47.
7. Madeleine Vionnet, pp.288-289, reprinted from Madeleine Chapsal's La Chair de la robe (Librairie Arthème Fayard, 1989). 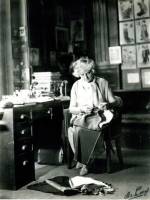 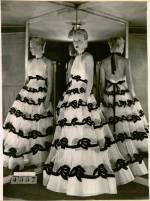 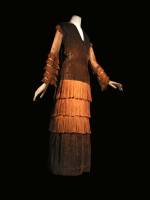 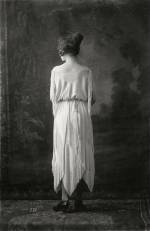 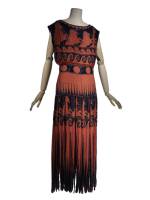 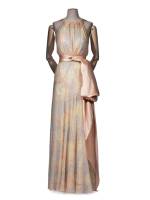 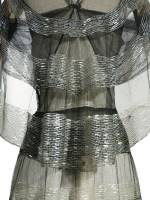 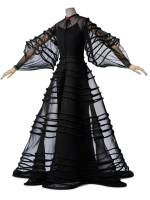 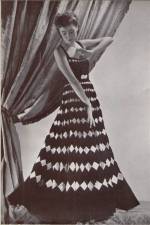