Translating a Spiritual Legacy. Chanel: The Vocabulary of Style

Chanel: The Vocabulary of Style
Jérôme Gautier
Thames & Hudson in the UK/Yale University Press in the US and Canada, 2011

For sheer visual impact – more than 70 of the most talented fashion photographers of the 20th and 21st centuries are featured – the latest of a spate of books on Gabrielle Bonheur “Coco” Chanel (with yet more to come in 2012) tops the list and no doubt will be among the bestselling holiday titles of the year.

In Chanel: The Vocabulary of Style (UK£65/US$100), author Jérôme Gautier writes like a schoolboy with a crush on his subject, tending towards overstatement. So much has been written about Chanel since she emerged as an “insolent upstart”, as Gautier describes her, opening her first Paris shop in 1910 and boutiques in the French resort towns of Deauville and Biarritz a few years later. One tends to take her story for granted. Gautier operates by questioning how much we really know about Chanel, the woman, and the force behind her commercial success. He clearly articulates critical aspects of Chanel’s style (her “vocabulary”) that have been overshadowed by the couturier’s misleading statements and contradictory nature (Gautier calls her a “mythomaniac”), as well as her many love affairs with, for example, a duke (Westminster), a composer (Stravinsky) and a Gestapo agent (“Spatz”).

Gautier points to Karl Lagerfeld, head of Chanel since 1983, as the person who has best understood the essence of Chanel. According to Gautier, Lagerfeld quickly grasped the most appealing aspects of Chanel’s vision and translates them with flair and finesse for younger women. When Lagerfeld took over, Chanel as a brand rested on laurels that had been forgotten, and an image that signified “middle class” and “middle aged”. Today, Chanel clothing, jewellery and perfume are represented by models picked by Lagerfeld for their affinity with the house’s namesake (eg Inès de la Fressange and Stella Tennant) and sought by clients who want simple, elegant and supremely wearable clothing. Then and now, the lure of clean lines and well-cut fabrics that move with the body, jazzed up with whimsical details and flashes of luxury in the form of gold buttons and chains, sequins and pearls, and baubles and bangles, proves to be strong. In the 21st century, Gautier infers, women want the same things that Chanel offered to wealthy socialites in Deauville and Biarritz before the first world war; to the newly bobbed “flapper” crowd in the 1920s; and to women desiring more feminine silhouettes in the 1930s.

Gautier examines the little black dress, Chanel suit, quilted bag and two-tone shoes, Chanel’s pioneering use of jersey and tweed, and her love of menswear, tracing these visual expressions to a spiritual (ie philosophical and personal) source. Like Balenciaga and Valentina, Chanel was affected by the clerical attire she encountered daily when she was young; in her case, the habits worn by nuns in the orphanage where she was raised. She detested the overdressed women she saw in Deauville and Biarritz, whose clothing reflected the prestige and position of husbands and families. Such clothing kept them, literally, imprisoned in fabric cages. Their hats were so festooned and heavy that, like corsets, they threatened bodily harm. Chanel the rebel – Gautier’s and Lagerfeld’s favorite persona – set out to free these women of their own timidity. The writer Colette called Chanel a “little black bull”, and Gautier points to an image reproduced in the book, a 1934 photo by Boris Lipnitzki, that shows Chanel – black dress, pearls and cigarette in hand as usual – with a pugnacious look in her eyes.

Lagerfeld’s career took off like a shot when the 22-year-old designer began working as a stylist. He spent five years with Patou, one of Chanel’s main rivals, learning about much more than fashion. There, he expanded his knowledge of history, architecture and art, as well as his inherent talent for interpretation. Later, working for Choé and other houses, he made a quick study of designers and collections to highlight brand and image, while asserting his own vision. The job with Chanel, Gautier suggests, was a perfect fit.

Despite her inherent distrust of excess, Chanel developed tastes for a wide range of artistic styles, including Byzantine, baroque, abstract and folk traditions from Russia. Frequently, the influences came as a result of affairs with particular men, or from connections with artists introduced by her friend, the model and muse Misia Sert. The photos in Gautier’s book display such influences in Chanel’s own collections and Lagerfeld’s remixes.

The design of Gautier’s book is also overstated, and happily so. From the bright pink slipcase to the attractive covers (different for UK and US editions), every aspect moves towards proclaiming Chanel a fashion queen long after her death in 1971. Inside, vintage photos of Chanel and models wearing her designs are positioned next to contemporary images within thematic chapters to emphasise styles and symbols, themes and treatments. Echoes resound throughout, from models’ physical positions and garments, to settings and facial expressions. Readers will enjoy traveling from two-tone shoes of decades past to two-tone sneakers and ballet pumps of the present, and some will savour the challenge of identifying famous models and photographers showcased. (Complete details for each photo are available at the back of the book.)

During her last years, a somewhat bitter Chanel became obsessed with rewriting her story and held tightly to her reputation as couturier to the Modern Woman. She had survived a hiatus of 15 years from 1939 (when she closed her house at the start of World War II) to 1954 (when she returned to Paris from exile in Switzerland). She had weathered Dior’s New Look in the 1950s and the hippie styles of the 1960s. Her claims may not have been accurate, but she alone of her peers remained to make them.

Gautier’s appreciation of Mademoiselle, as she was known, does not defend or protect an image. It celebrates a spirit of rebellion and the courage to be different, to rifle through a lover’s closet and borrow a narrow tie or riding jacket, and to offer a “pauper” style to wealthy socialites that also appeals to less affluent women. If there is a vocabulary or language associated with Chanel, Lagerfeld speaks it with fluency, and Gautier’s book can be considered the only dictionary for it to have on hand. 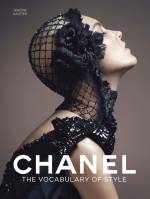