A Deeper Look at an Art Deco Designer Du Jour

George Barbier: The Birth of Art Deco, by Barbara Martorelli
(Marsilio Editori, 2008; distributed in the US by Rizzoli, September 2009)

An apt setting for the first major exhibit covering Art Deco designer George Barbier's full range of production, the Museo Fortuny's elegant display spaces were filled from 30 August 2008 to 5 January 2009 with Barbier's pochoir fashion plates, book illustrations, costume and sets for theatre and film, fabrics, jewellery, glass, advertising art, photographs and volumes of the magazines that catapulted him to fame. The imposing Gothic palazzo in Campo San Beneto housing the museum's collections retains in appearance and contents Fortuny's atelier prior to his widow's 1956 gift of the building to the city of Venice. Like Barbier, Fortuny (1871–1949) is remembered for his work in fashion; and like Barbier, Fortuny's accomplishments ran much deeper, in Fortuny's case as painter, etcher, sculptor, photographer, lighting engineer, theatre director, set designer and architect. Finally, Fortuny's passion for the arts of the past from Europe and the near and far east provide aesthetic and spiritual bonds between him and Barbier. Fortuny's vast resources included ancient Greece, Persian miniatures, his native Spain's Moorish architecture, 16th-century European arts and fashions and Richard Wagner's operas. For Barbier, historical and exotic sources were framed by a love of 18th-century European opulence.

In the 1960s, well after Barbier's career ended with his death in 1932 at the age of 50, the term “Art Deco” came into circulation with the Deco revival. Collector interest at the time surged, with Barbier's name becoming inextricably linked to his charmingly decorated fashion plates. Frequently, Barbier's own clothing and jewellery designs adorned the slender female figures in these illustrations. He placed them in luxurious settings that demonstrate his interior design skills and acute perception of elite society ideals. With voracious collector appetites growing from the 1960s to today, plates from books and magazines have been sold piecemeal without regard to the integrity of the whole. Barbier's fashionable images may have been reproduced many times over in novelty items (calendars, postcards, etc), but his admirers never tire of them. As a result, the artist's production in other fields has been overshadowed. In fact, since his death, Barbier's name has been just that; a name, along with other iconic Art Deco illustrators (Georges Lepape, Paul Iribe, Charles Martin, Bernard Boutet de Monvel, Pierre Brissaud, Edouardo Garcia Bénito, André E. Marty), subsumed by the movement they helped to create. Less ostentatious than their better-known colleague, Russian designer Erte, with whom Barbier collaborated, they deserve greater recognition of their legacies to future designers.

Curated by Barbara Martorelli, George Barbier: The Birth of Art Deco aimed to locate the man behind the images, or “mirages” as he called them. Presenting more than 200 originals and associated materials, the exhibit succeeded admirably toward this end by articulating Barbier's refined sensibilities, impressive knowledge of art and literary history, and engagement with emerging modern art. These materials came from the collections of Palazzo Mocenigo Museum and Study Centre of the History of Fabrics and Costumes; Musée des Arts Decoratifs, Paris; La Bibliothèque nationale de France; Musée des Beaux Arts, Nantes; and private collections in France and Italy. Of particular note, Barbier's writings come from the pen of an erudite, frequently ironic and witty commentator on culture and high society during the first three decades of the 20th century.

As a record of the exhibit, the catalogue disappoints.1 Collectors might be seduced by the superior paper quality, typography, layout and colour printing. Scholars and students will welcome contributing essayists' insights and Martorelli's comprehensive list of works by and about Barbier; Alain Stoeffler's annotated roundup of Barbier's work in theatre alone is worth the price of the catalogue (US$50/UK£32.50). But the sizing of some images is jarring; for example, two photos of the artist's studio on page 25 and a fan on page 30 are comparatively tiny. Other pages have a great deal of unused white space at odds with pages reproducing multiple images. More problematic, rough rendering in English mars every essay, and when essay authors provide quotations from original sources in French, they do not provide English translations in endnotes. One wonders about this omission as Martorelli and her publishers chose to offer the catalogue in English as a common language for international audiences. Patience is advised, for readers will discover gems worth unearthing in these texts.

“... the Venice of George Barbier was anchored to all the possible historic and literary, aesthetic and iconographic myths that the endless repertoire of the grand, old, exhausted enchantress could reveal. These were being renewed or reinvented by the fresh blood that the Venezia Nuova of the architects and town planners, the property dealers and art connoisseurs, the travel agents and impeccable concierges were liberally spreading to the point of filling the fantastic and still ingenuous certainties of the collective imagination”.3

As entertaining and informative as his round-up in the volume's back matter, Stoeffler's essay, George Barbier at the theatre or the man who dresses dreams, examines the profound affect that Diaghilev and Leon Bakst had on Barbier, who worked with and championed the Russian choreographer and designer but also expressed his dislike of the 1917 Cubist-inspired Parade. Stoeffler notes the symbiotic relationship between Barbier's book illustrations and theatre designs, with original works reproduced to illustrate the essay attesting to the interplay: costume designs for Petrouchka and Shéhérazade (1913), Lysistrata (1919), Casanova (1923) and Les Folies Bergère (1923, 1928), among them.

Art historian and Director of the Library of Fabrics at Palazzo Grassi Doretta Davanzo Poli places Barbier in familiar context in her essay, George Barbier and Fashion, while Mauro Nasti's survey of Barbier's erotica brings out a previously underplayed aspect of the artist's genius. Soon after Barbier's death, his family auctioned many of his rare editions, and gave his collection of Japanese and European erotica to the Bibliothèque nationale de France, where it was placed in a restricted section. According to Nasti, Barbier's aesthetic philosophy can be traced directly in his erotic illustrations, as well as to the authors whose works he illustrated (eg Charles Baudelaire, Henri de Régnier, Pierre Louÿs, René Boylesve) and the books he collected. Barbier's poetic sense of disorder and beauty was simultaneously Classical in a specific sense and in his generalised love of history, fantasy, mythology and simplified, harmonious perfection.

Following a brief overview of pochoir, in which Giuliano Ercoli (Art Deco Prints) identifies Barbier as champion of pochoir when many others underrated the technique's potentials, the last two essays approach Barbier from different sides of the spectrum. Bibliothèque nationale de France's Carine Picaud covers lavishly produced deluxe editions and albums produced in limited press runs in her appreciation of Barbier as bibliophile, while Art Deco historian Jean Izarn concludes with Barbier's advertising art, detailing the artist's activity on the commercial side for the likes of Cartier, Renault, Rigaud perfumes and Abdullah cigarettes.
Despite the stumbling blocks noted above, George Barbier: The Birth of Art Deco will likely provoke further research and publications on Barbier and his peers. One of the designers “du jour” of the interwar years, Barbier left his stamp in many ways beyond collectible fashion plates and Cartier's black panther. The exhibit at Museo Fortuny and Martorelli's catalogue have restored Barbier from designer “du jour” to man for all seasons.

1. The 176-page hardcover catalogue George Barbier: The Birth of Art Deco, edited by Barbara Martorelli (Marsilio Editori, 2008) contains 198 colour illustrations; a bibliography of illustrated books augmented with a list of magazines to which Barbier contributed and references for his own writings and articles written about him; an annotated chronology of stage and film productions; and an exhibition checklist.
2. These illustrators of the so-called Golden Age of Illustration were known to the Anglophile Barbier through purchases he made for his personal book collection and as they were showcased in The Studio, which covered and promoted their work. The Studio also printed articles featuring Barbier's designs, for example M. Valotaire's 'George Barbier' (Volume 93, June 1927) and Léon Pichon's 'The New Book Illustration in France' (Special Winter Number, 1925).
3. George Barbier: The Birth of Art Deco, p.54. 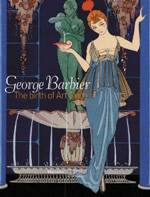