Fashion’s Archeologist Excavates Her Past

Fashion’s Archeologist Excavates Her Past

Mary McFadden: A Lifetime of Design, Collecting and Adventure by Mary McFadden with essays by Ellen Fisher (Rizzoli, 2012)

A woman who shares her living space with a Mexican Huastec figure dated to 900 CE, Russian icons, Indian and Syrian gold and bronze objects, ancient Chinese vessels, Noguchi sculpture, paintings by Morris Louis and Franz Kline, and a cache of other precious artworks is a woman to take seriously, particularly when she has spent decades travelling the globe to acquire them, meanwhile creating dramatic ensembles and jewellery for her fashion house, and doing some impressive interior design for good measure. The woman described is American couturier Mary McFadden, and a new monograph-cum-memoir – Mary McFadden: A Lifetime of Design, Collecting and Adventure – spectacularly illustrates her career as designer, writer, art historian, art collector and, perhaps foremost, adventure-seeker.1

Primed from birth for success, McFadden seems destined to have made her mark on the world. Her extended family includes great-uncle Charles Suydam Cutting (1889-1972), a member of the Chicago Field Museum’s Kelley-Roosevelt Expedition to East Asia (1928) and the first westerner to enter the Forbidden City of Lhasa in Tibet (1935-37). In 1938, the year of McFadden’s birth, Cutting co-led an expedition to Burma, the spoils from which he gave to the American Museum of Natural History and the New York Botanical Garden. (Years later, the designer’s journeys followed in some of Cutting’s footsteps.)

Her paternal great-grandfather owned a thriving cotton brokerage firm near Philadelphia; her father inherited part of the business, and she spent her early years on a cotton plantation near Memphis, Tennessee. Add to the familial mix links to Robert Fulton of steamboat fame, a radio pioneer and numerous fine art collectors. One relative, John H McFadden (1850-1921), left 43 British paintings of considerable value, including JMW Turner’s Burning of the Houses of Lords and Commons, to the Philadelphia Museum of Art. So, McFadden inherited the role of benefactor as well as a passion for exploration and acquisition. While filling her homes and workplaces with museum-quality art and objects, she has exhibited her collection and lectured widely on ancient cultures and civilizations to further understanding and promote preservation.

Although her education on paper seems spotty, the new volume emphasises McFadden’s commitment to the study of indigenous peoples and traditional art forms. Her family enrolled her in a military academy, where she earned approval for her disciplined nature. After graduating, she spent a short time at the Traphagen School of Design in New York. McFadden also attended the Sorbonne and École Lubec in Paris, and studied sociology and anthropology at the New School for Social Research and Columbia University in New York, but did not earn degrees from any of them. As for cultivating her tastes for high fashion – she became a regular at the Paris shows from the age of 13 – and for royal company, she says that she met the likes of Prince Aly Khan at annual family balls – McFadden was well-prepared.

Her first foray into buying art occurred aged 16. After receiving three diamond bracelets from her grandmother, she promptly sold them to purchase paintings by Salvador Dalí. Later, she would use the buy, sell and barter method time and again. For example, in her mid twenties, McFadden convinced Dior New York President Henry Sherman, whom she had met at a cocktail party, to hire her on spec as a publicist and pay her in couture – 20 dresses each per season from the New York and Paris collections – which she turned around and sold to friends to fund her purchases. Subsequently, McFadden bought works by such luminaries as Yves Tanguy, Paul Klee, Wassily Kandinsky, Andy Warhol, Robert Rauschenberg and Max Ernst, along with Asian antiques, Benin bronzes and whatever else captured her fancy. Then, in 1973, she sold much of it at Sotheby’s to raise capital for Mary McFadden Inc., her couture house established in 1976.

McFadden left Dior in 1964 to move to South Africa with her first husband, DeBeers executive Philip Victor Harari. Drawn to the beautiful textiles that she found in marketplaces there but unable to find suitable ready-made clothing, she sewed her own outfits: simple, comfortable but elegant shapes serving as backdrops for beautiful cloth. She had her hands full caring for a new baby and accompanying Harari on trips to DeBeers diamond mines, yet her career as a writer took off full force.

In the book, she comments that when Vogue Editor-in-Chief Diana Vreeland made her an editor at Vogue, South Africa (1964-65), she discovered “a new and purposeful way of life” that otherwise would have been “cluttered with cocktail parties and dinners”. She worked on editorial projects with South African photographer Sam Haskins; wrote for the Johannesburg-based anti-apartheid newspaper The Rand Daily Mail; freelanced for a Capetown paper and Vogue, Paris; divorced and married second husband Frank McEwen, then-director of the Rhodes National Gallery in Rhodesia; and purchased 90 acres of land to establish a workshop for native sculptors. Concurrently, she found archeological wonders to add to her growing hoard, developing a characteristic way of mining the past that she later applied to her fashion designs and which has earned her the title of “fashion’s archeologist”.

After divorcing McEwen in 1970, McFadden returned to New York with her daughter to work at Vogue. Her associates admired the classic lines, unusual textures and glorious colours of her homemade wardrobe and urged her to bring the garments to Geraldine Stutz, president of Henri Bendel from 1957 to 1986. Stutz arranged for McFadden’s first fashion show. Strong sales and reviews encouraged McFadden to secure a network of international suppliers, workshops and craftspeople to help her create her diverse, historicizing collections, each named for a particular influence, culture or civilization and featuring a show-stopping bridal costume.

Readers are advised to have an atlas nearby as they read McFadden’s book, as well as pen and paper to keep a timeline. Few photographs are dated, and few dates appear in the text. McFadden describes her vision as “synchronic,” rather than chronological, with places and times overlapping and merging. One might conclude that McFadden’s world does not contain clocks when she is not rushing to catch a plane. But the anecdotal narrative provides greater insight into her decisive personality, rarified tastes and deep appreciation of art and traditional cultures than any typical monograph could.

Her reverence for life and the exciting opportunities that have come her way extends to her parents. She describes her father, who died in a skiing accident when McFadden was 10-years-old, as a man of mystery, stating that, “It is a McFadden trait to flirt with death….” She dedicates the volume to her mother, a woman who “wove our homes like a Persian carpet” and who is shown in a lovely photographic portrait taken by Cecil Beaton.

The first half of the memoir contains McFadden’s reminiscences; costume historian Ellen Fisher’s essays on the designer’s inspirations, jewellery and interiors then give context to the images reproduced in the second half. The nuts-and-bolts of McFadden’s alchemy come a bit clearer in the essays, but readers hoping for discussions of artistic processes will be disappointed. The photographed ensembles, jewels and apartments serve as sources for McFadden the woman rather than as sources for an overall aesthetic.

With so many extraordinary experiences attached to her biography, it is easy to lose sight of McFadden’s impact on the fashion world. For instance, stories about her brief, unintentional marriage to the King of Dogon, whose wedding gifts were the seeds of her ancient gold collection; her initiation into a Sufi order; and a trip to Outer Mongolia to save early Buddhist texts, which cast her as an art world Indiana Jones, dressed in couture-quality attire appropriate to each setting. (In his introduction, current husband Nobel Prize-winning physicist Murray Gell-Mann says that she has been known to scale rocks wearing semi-high heels.)

Throughout her career, she has favoured basic but graceful toga-style silhouettes decorated with enlarged adaptations of timeless imagery: African, Etruscan, Byzantine, Celtic, pre-Columbian, Asian, Renaissance, etc. Reflecting her “synchronic” system, the pleated tunics refer to the classical (Greece), historical (Fortuny) and the modern (McFadden). The fabric columns and bold accessories ennoble women of all sizes, with diminutive, theatrically coiffed McFadden making the perfect model for the mystique they impart.

Institutions continue to award McFadden honorary degrees and invite her to lecture. She has also been the subject of solo exhibits that, like her living and work spaces, blur the boundaries between what she has made and what she has acquired. When placed together, McFadden’s ancient treasures and modern designs harmonise eras, centuries, materials and sensibilities, as they did in the 2004 retrospective Mary McFadden: High Priestess of Fashion held at the Allentown Art Museum in Allentown, Pennsylvania, and the autumn 2008 Mary McFadden: Goddesses at Moore College of Art & Design in Philadelphia, which travelled in 2009 to the National Museum of Women in the Arts in Washington, DC.2 She also contributed to the Smithsonian’s 1985 celebration of India held at the Cooper-Hewitt in New York, The Golden Eye.

Mary McFadden: A Lifetime of Design, Collecting and Adventure puts McFadden’s accomplishments in fashion and far beyond into perspective. She can be viewed within a lineage of globetrotting, art-loving risk-takers who flirted with danger to live on a different plane. If self-help writers are correct and we can create our own realities, then McFadden’s excavations of her past should be considered a roadmap illuminating the tracks of a woman who took the reins of her life and never let go.

References
1. Mary McFadden: A Lifetime of Design, Collecting and Adventure by Mary McFadden, with essays by Ellen Fisher (Rizzoli, 2012). The 256-page volume has 250 colour and black and white illustrations and retails for US$75/UK £47.50.
2. The catalogue Mary McFadden: High Priestess of Fashion by Mary McFadden and Ruta Saliklis (Bunker Hill, 2004) accompanied the exhibition in Allentown. 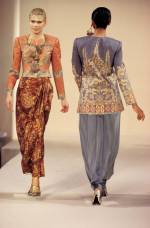 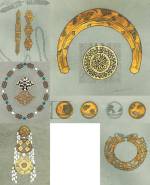 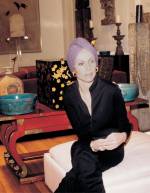