Elemental Extravagance: The Jewelry and Metalwork of Marie Zimmermann

Widely admired and acquired during her lifetime, Marie Zimmermann’s (1879-1972) jewellery and metalwork reference a gamut of influences – ancient Egypt and Rome, the Far East and Colonial America, popular styles of her time like arts and crafts and art deco – modernised by dynamic geometric patterning. Art critics, collectors, and galleries supported Zimmermann’s business throughout her career. Then, during the Depression, Zimmermann felt the loss of wealthy clients and changing tastes. She had also lost her parents and siblings to illness. Thus, in 1939 she closed her New York City studio and retired to her family’s country retreat, The Farm, near Milford, Pennsylvania. 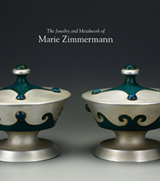 Since her retirement, Zimmermann’s contribution to the history of early 20th-century American decorative arts has become a sideline to the main story. A new volume published by American Decorative Art 1900 Foundation (ADA1900) in association with Yale University Press aims to restore Zimmermann’s reputation as one of the most sophisticated and skilled designers of the period.1

Zimmermann’s designs in gold, silver, bronze, copper, and iron are quite refined, and her jewellery – embellished with enamelling and an array of coloured gemstones – is pure extravagance. Because she did not aspire to a strictly defined style like Frank Lloyd Wright and Louis Comfort Tiffany achieved, scholars describing her often resort to a list of cultural events, art movements, and technical advances that may have affected her aesthetic philosophy and methods.

Certainly, Zimmermann read articles about the 1922 discovery of Tutankhamen’s tomb, saw imports from the Far East, and noted the emergence of Classical and Celtic revivals in the decorative arts. Born in Brooklyn, New York, to a prosperous Swiss merchant family, she had access to many cultural institutions and museums and was eager to learn about international styles. Yet, looking at a group of her designs in different media, one detects an intangible, entirely personal aspect – an elemental quality – that cannot be attributed to sources.

Bold and confident as the artist herself, the works appear as if they might endure for as long as the Egyptian, Etruscan and Roman treasures she is said to have favoured, particularly when she treated them with patinas like verdigris. She constructed simple shapes and imbued them with a weighty presence echoing archeological artifacts. Undoubtedly, this sense of longevity contributed to her greatest commercial success, designing funerary monuments.

Scholars have had difficulty categorising Zimmermann; not surprisingly, this has worked against her legacy. ADA1900 founder and president Bruce Barnes commented:

“Marie Zimmermann was not among the artists whose work was included in the 1972 landmark book and exhibition The Arts and Crafts Movement in America, 1876–1916. Attention to her work by arts and crafts scholars was diminished because she had received limited coverage in the design press prior to 1916, at the twilight of the movement. Her works’ distinctive style also delayed its rediscovery because it was not easily categorised. Although her career started during the heyday of the arts and crafts movement, she is better understood as an individualistic designer who made eclectic objects in a wide range of media.”

The first deep examination, a 2006 University of Delaware graduate thesis, was published many decades after Zimmermann’s 1972 death. Written by Kimberley Ahara, then a student in the Winterthur Program in American Material Culture, Marie Zimmermann: Master of A Dozen Crafts surveyed the artist’s unique approach to each medium she pursued.

Over the years, galleries and museums have exhibited Zimmermann on a small scale; for example, Colby College in Waterville, Maine (1982), and the Metropolitan Museum of Art in New York (1985). With fewer than 20 works, the Met’s retrospective could not convey the prodigious inventory that Zimmermann amassed, which includes memorials and stained glass windows; vases and pitchers; plant stands and garden gates; ash trays and cigarette holders; and silverware and jewelled daggers.

From the grandest to the simplest, Zimmermann’s designs suggest an exacting ethos. Her main strength was an ability to harmonise opposing forces and channel their energies into a seductive creative tension. Influential critic Mary Fanton Roberts (1864-1956), who consistently gave the artist good press, pointed to Zimmermann’s intriguing handling of iron in a February 1922 issue of House and Garden magazine, remarking on Zimmermann’s typical mixing of “strength and permanence with delicate beauty”.2

With more than 500 illustrations, The Jewelry and Metalwork of Marie Zimmermann serves as a true retrospective of a very private and prolific craftswoman. ADA1900’s previous print project set the bar high for this follow-up: The Artistic Furniture of Charles Rohlfs, produced for a 2009-11 travelling exhibition, has won prestigious awards and brought Rohlfs’s (1853-1936) furniture to a global audience. For their book on Zimmermann, Barnes and ADA1900 director Joseph Cunningham teamed with the Zimmermann family led by grandnephew Jack Zimmermann, independent curator Deborah Dependahl Waters, and Ahara. Jack Zimmermann lent most of the items in the 1985 Met show and his daughter organised the Colby College exhibition.

In his preface, Barnes explains ADA1900’s interest in Zimmermann, pointing to correspondences between her and Rohlfs: Both artists incorporated diverse stylistic elements and themes into their work, did not need to earn money, and left numerous artworks, documents and photographs that remain in family archives.3 In Zimmermann’s case, although she worked for art’s sake, she was also a savvy marketer. She hired photographers to record her inventory and used the images to secure press, exhibitions, sales and commissions. Disappointing sales figures at gallery shows left her downcast.

The authors have separated the volume into two parts, the first half biographical and the second focused on objects: jewellery; tabletop items; silver and gold; iron and bronze; and colour and surface decoration. Vintage photographs provide the setting for Zimmermann’s biography, functioning like settings for her jewels: fascinating backdrops for the tale of a remarkable woman artist. These include shots of her studio at the National Arts Club in New York City’s Gramercy Park; contemporary gallery displays; and images of the artist. Whether at The Farm with family, on hunting and fishing trips with life partner Ruth Allen, or travelling with friends, Zimmermann appears to have had a great capacity for living as well as working. One might expect to see her holding the tools of her trade rather than a gun, but she was a skilled markswoman who loved the outdoors. From girlhood, she rode horses; later in life, she became passionate about cars. Beyond making art, though, her real passion was The Farm.4

While Zimmermann’s personality has been described as prickly, apparently she was merely strong-minded and inclined to follow her predilections and instincts over any prescribed plan. She joined social and art clubs when they suited her, leaving them when they did not. For most of her life, she lived on her own terms in a world she fashioned for herself. (At the end of her life, she embraced philanthropic efforts at the urging of a friend, physician Connie Guion.) Before her death, she left instructions that her papers be burned. What we know of her comes from contemporary accounts of exhibitions, sales receipts, a few surviving letters, and her inventory.

During the past decade, prominent institutions have added Zimmerman to their collections. Today, one can find examples at the Art Institute of Chicago, the Carnegie Museum of Art, Edsel and Eleanor Ford House, the Los Angeles County Museum of Art, the Met, the Minneapolis Institute of Arts, the Museum of Fine Arts, Boston, and the Wolfsonian-Florida International University Museum and Library. The Jewelry and Metalwork of Marie Zimmermann presents the reasons for growing interest, foremost among them the timeless beauty of a wide range of exquisite objects. Barnes reports:

“In recent years, museums and scholars have become interested in Marie Zimmermann in part because she was an early example of an independent woman who had a long career as a designer with her own studio. The pace of museum acquisitions of her work has quickened in recent years as excellent works by Zimmermann, especially jewelry, have become available.”

Thanks to active promotion by ADA1900 and Jack Zimmermann, Marie Zimmermann’s name is edging inwards from the sidelines of 20th-century decorative arts discourse.5 As for the effect of her work on the eye, such elemental extravagance need only be viewed to make the cut.

2. The Jewelry and Metalwork of Marie Zimmermann, p.72.

4. Located in the Delaware Water Gap National Recreation Area, the Zimmermann farmhouse is listed on the National Register of Historic Places. The US National Park Service website has more information on the house and its restoration. See: http://www.nps.gov/dewa/historyculture/upload/cmsstgMARIE.pdf 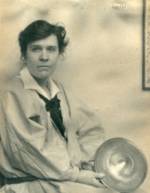 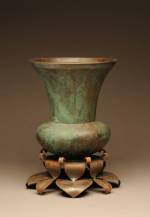 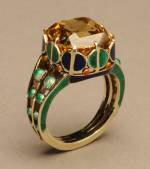 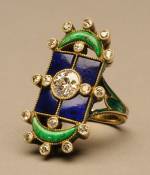 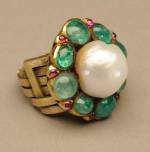