Drawing Fashion: A Century of Fashion Illustration honours the art dealer Joëlle Chariau’s unique collection, assembled over a period of 30 years, of many of the best fashion illustrations from the 20th and 21st centuries. The collection ranges in style from works from Poiret, Chanel, Balenciaga, and Dior to Comme des Garçons, McQueen and Victor & Rolf. Chariau’s gallery, Bartsch & Chariau, was founded in 1980 and was described as the “Mecca of Graphic Art”.

She explains that her specialisation in graphic art (cartoons and fashion drawings) came about by chance, at a time when very few people were interested in the genre. Finding the content and critique of much “high” art dogmatic or too intellectual Chariau led to an interest in art with a commercial application. The second exhibition she staged at her new gallery (with partner Andreas Bartsch) featured the great cartoonists of the New Yorker. Fashion art came two years later when she discovered the work of René Gruau, who has had a great influence over her collection and career. Sadly the son and heir of René Gruau did not give permission to reproduce or exhibit the 27 Gruau works in the Chariau collection. Chariau describes Graua as the greatest master of fashion drawing and his exclusion as unforgivable.

Although certain individuals in the art world in the 1980s were puzzled by Chariau’s shift to commercial art, the exhibitions were well received and the gallery was a financial success from the beginning. Fashion then was less of a cultural force than it is today and a greater distance existed between fashion, which was considered superficial, and the fine arts. Fashion’s traditional association with femininity and its relegation in the hierarchy of the arts, made it difficult for fashion art to be rightly appraised.

Drawing Fashion has been published to accompany the recent exhibition at the Design Museum, London (November 2010–March 2011). When Renate Stauss asked Chariau to describe the position fashion drawings occupy between art and commerce, she replied:

“The radius of fashion drawing being quite small nowadays, the artists who engage in this profession cannot be overtly commercially minded. They still work on assignment, so this genre therefore belongs to the field of commercial art. On the other hand, interesting works are always more than they pretend to be, so the dividing line must be a fluid one.”

She describes a fashion drawing as, “the staging of bodies and attitudes. It is defined, above all, by the quality of the drawing and the creativity of the artist, but it also requires a perfect understanding of the essence of a garment and the ability to translate it into an image of desire”. Distinguishing a fashion photograph from a fashion drawing, Chariau continues, “It is definitely the power of abstraction of the drawing that imprints itself in the memory of the viewer more effectively than a more realistic photograph can do. Gruau’s answer when I asked her the same question, was that a good photograph worked better than a good drawing, but that a very good drawing was superior to a very good photograph.”

The first essay, Drawing Fashion, by Colin McDowell of the Sunday Times, makes the case for fashion illustration as an art form. If the drawing is brilliant, he argues, then why treat it any differently from the drawing of Fine Art? Indeed, when one thinks of Degas’ ballerinas, and Delacroix’ horses, one is inclined to agree with him – that frivolous subject matter does not detract from the quality of art per se.

New York Times journalist Holly Brubach’s essay, Of this World but Not In It, develops the argument and gives a brief (and entertaining) history of fashion illustration (referring to the drawings featured in the book).

Drawing Fashion indeed presents a superb selection, fully justifying McDowell and Brubach’s insistence that the best fashion illustration really is as accomplished as the best drawing. From Lepape at the turn of the century, to Bérard in the 1930s and 1940s, Cecil Beaton, Antonio during the 1960s, 70s and 80s – to current artists Mats Gustafson, Aurore de la Morinerie and François Berthoud – a truly spectacular range of work is brought together. As Renate Stauss observes, “Although they all take as their subject the transient field of fashion, the artists presented here seem to be united by a timeless elegance and an evocative, sensual aesthetic rather than engaging in an overtly fashionable language”. The exhibition he rightly observes, “constitutes among other things, a walk through twentieth-century Western European aesthetics and ideas, through the history of fashion, beauty and body ideals”. 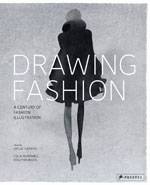