Exiles and Emigrants: Epic Journeys to Australia in the Victorian Era

Exiles and Emigrants: Epic Journeys to Australia in the Victorian Era

The exhibition 'Exiles and Emigrants: Epic Journeys to Australia in the Victorian Era' has succeeded in seizing the imagination of thousands of visitors who have responded to the stories depicted in these Victorian narrative paintings. For most viewers, particularly in a nation settled by immigrants (primarily convicts in the initial, enforced settlement of New South Wales), each story recalls those of their own forbears. Prompted by the writing materials located at the conclusion of the exhibition, many have been encouraged to document their own individual histories: these are now pinned up on the final wall. Showing the universality and continuing relevance of immigration, the National Gallery of Victoria (NGV) curators have incorporated a contemporary work from their collection at the conclusion of this 19th-century survey - Jan Nelson's 'International Behaviour' (2000), which starkly depicts the recent arrival of boat people to these shores.

The guest curator, Patricia Tryon MacDonald, herself an emigrant to Australia, has an innate sympathy for the complex feelings of the subjects of these images. She has hung the exhibition in a clear progression, moving from the motivations behind the departure, through the dangers and boredom of the journey, to the arrival in a new land, the exchange of letters between the new settlers and those back 'home' and finally, the pioneer's experience. As MacDonald stresses: 'It is a story of people - human beings: where they went and why they went, and what they faced up to. They were astonishing people with great courage'.

The paintings in the first room help to explain just why around 15 million emigrants left the United Kingdom in the Victorian era. During this period, while industrialisation created great wealth and opportunity for many in Britain, others lost their traditional livelihoods. The title of this sector is borrowed from Ford Madox Brown's icon of English emigration, 'The Last of England' (1855), which easily dominates the gallery with its clear, luminous pre-Raphaelite palette. Patricia MacDonald rightly saw this as the key to the exhibition: 'When you are putting together an exhibition that has never ever been done before and are trying to tell a story, you are only as good as the loans you can get'. Never lent outside England before, this is the first time it has hung beside its Scottish counterpart, Thomas Faed's 'The Last of the Clan' (1865). This work from the NGV's collection, graphically illustrates the desolation caused by the Highland clearances and the mid-century potato famine, by showing the clans reduced to one old man and a young girl. Ford Madox Brown's renowned work was painted over three years, at a time of personal conflict for the artist. It captures the contradictory feelings of the young family - their apprehension and sense of loss alongside their strength and optimism, in what the artist described as, 'the circle of love' (expressed by the father, mother and child, and their linked hands). In the exhibition, one also finds less well-known works from the outer circle of pre-Raphaelitism, such as Henry Wallis's 'The Stonebreaker' (1857), in which the artist's striking depiction of evening light bathes a dead worker's body in an unearthly glow. Both works are generously lent by the Birmingham Museums and Art Gallery, who, according to MacDonald, agreed to send the works to Australia because, 'this is the first time anybody has really tackled the subject [of emigration]'. Another powerful image, rarely seen by the broader public, is Lady Butler's 'Evicted' (1890), in which the Irish peasant woman stands barefoot and proud in the still smoking ruins of her destroyed home. Painted when England was preventing Irish home rule, it was an unpopular depiction there, for an Ireland already in revolt.

After the opening section - with its group of impressive social realist pictures - there follows a series of themed alcoves that focus on particular aspects of the emigrant's departure and journey. One section named 'The Final Farewell', for instance, addresses the moment of departure, and one is struck here by the importance of the written word in shaping the Victorian public's understanding of this phenomenon. Charles Dickens' vivid description of the departing emigrant ship in David Copperfield is shown to have directly influenced Henry Nelson O'Neil's 'The Parting Cheer' (1861). The work of the 18th-century poet, Oliver Goldsmith, inspired three other works - Richard Redgrave's 'The Emigrant's Last Sight of Home' (1858), Joseph Severn's 'The Deserted Village' (1857) and Thomas Falcon Marshall's 'Emigration - the Parting Day' (1852). Other aspects of the emigrant's experience follow: 'Women and Children Last' where Frank Holl's painting 'Gone!' (c.1887) clearly demonstrates the plight of the women and children left behind; 'The Voyage', where displayed objects augment the images of shipboard experience, ranging from sketching, shipboard games and quilt-making to braving the perils of shipwreck; then 'The Arrival'; 'From a Distant Land' and finally 'The Pioneer'. In the section, 'From a Distant Land', an intriguing trilogy of images can be found: Harden Sidney Melville's work entitled 'The Squatter's Hut: News from Home' (1850-51); Thomas Webster's 'A Letter from the Colonies' (1852) and David Davies' 'From a Distant Land' (1889). These paintings display the importance of maintaining links with Britain through letters. Today's children, accustomed to the immediacy of electronic communications, have been intrigued to recognise the importance of handwriting; a nearby display cabinet containing a number of 19th-century letters with their minutely crossed writing and complex addresses reinforces the theme.

By the exhibition's end, the overwhelming impression is one consumed by nostalgia and loss. The selection of paintings, photographs, documents and objects emphasise the human face of these epic journeys - forced departures, dangerous voyages and homesickness. The figure of the successful adventurer happily seeking his fortune abroad is singularly absent from the gallery walls. Even the last painting, Frederick McCubbin's great hymn to Australian settlement, entitled 'The Pioneer' (1904), recounts a tale of endurance and hard work in a very foreign land. This exhibition forces us to remember that one in six of Queen Victoria's subjects was compelled to leave Britain in small boats. And this is the exhibition's strength: through the works selected, countless ballads of individual frailties and courage are sung, capturing the imaginations of the thousands of visitors who have come, looked, and felt impelled to write their own stories. 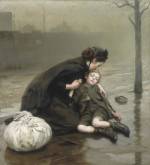 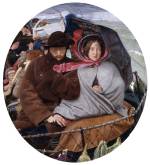