This important city monograph was first published over a year ago, but it is exemplary within the 'World City' genre beyond those established by Academy Group in the 1990s with titles such as Berlin, London and Los Angeles. These works were essentially life studies of 'world cities', and rightly deemed over-large and over-ambitious. Academy Group is now part of John Wiley, and Design City Melbourne is a promising direction in coverage and format, hopefully to be followed by further series of city studies by Wiley. Helen Castle, also Editor of Architectural Design magazine, has accomplished no mean achievement here editorially, and the selection of Professor van Schaik was astute.

'Marvellous Melbourne', or as the city was dubbed in the late 1880s, 'The Paris of the South' (largely on the basis of the burgeoning talent of her painters at that time), for a long while put Sydney in the shade. Culturally she was the capital of Australia.

In the 1950s, the film director Tony Richardson (the then husband of Vanessa Redrave) dubbed Sydney the 'Manchester of the South', which caused much upset. Rather as when Edinburgh was jokingly called (in the 1960s) 'The Reykjavik of the South', a corrective to the vanity of the 19th century, when she was called 'The Athens of the North'. Melbourne today, however, has become a cultural nexus since the 1980s that defies all expectations of the previous century. Geography would not seem to be in her favour, as the city is seldom the first landfall for visitors to Australia. Melbourne is still a fabulous city in the twenty-first century, but confident and cool of style. One doesn't need to add, Melbourne is more interesting than Sydney historically, has better restaurants, and has more intellectually stimulating fellow-beings than Sydney. Only in topographical terms does Sydney win out, with her incomparable bays and inlets. But only Sydney could allow the blatant solecism of a new apartment block of mean architectural quality to stick out like a sore thumb on the same green promontory as the famed and iconic Sydney Opera House. City insiders were deemed responsible.

Interestingly, in van Schaik's hands, this work is more than an architectural guide, old-style: it's full of real people. In fact it has a semblance to that 1960s publishing masterpiece 'Private View', edited by John Russell, Brian Robertson and Tony Snowdon. The individual artists and architects collectively now infuse this city Baedeker not only with facts but also with life. This is because, as van Schaik modestly describes his role, he has been 'the curator' of the city scene. Exceptionally, he has led the School of Architecture at the Royal Melbourne Institute of Technology, as Dean, and then Director, into a major catalytic role within this city of culture. Gone are the days when in the 1970s and early 1980s a small cash- and power-hungry clique of architects and politicians seemed to dominate planning and building, both institutionally and economically. Now, with van Schaik's steady, altruistic hand, everything has changed.

But it has taken the best part of two decades to develop such a transformation. Van Schaik and I both hit Melbourne around the same time, in 1987 (actually chasing the same job - he won!) Only he could have gathered the key architects (clustered around RMIT), the leading gallery directors, and one or two sympathetic politicians collectively to effect change in such a period. Backed by such up-and-coming architects as Norman Day, Peter Corrigan, Maggie Edmond, Howard Raggatt and Ian McDougall, he grew a mutually supportive culture, drawing into the conversation artists such as Bill Henson, Robert Owen and Susan Dimasi (working with Sydney stars Tonkin and Zulaika and with Perry Lethlean), and this process he orchestrated in his curatorial mode. It took time, but it was dramatic for change, gently purgative but transformative: a kind of 'Velvet Revolution' down under. RMIT was already Australia's leading architectural school, but now all round people sat up. Latterly too, RMIT attracted Paul Carter (a well-established commentator and author on Australian culture). And now the highly esteemed and radical (ex-UK) political writer and thinker Tom Nairn has found sanctuary there too, a sage of European politics intrigued by this country: and timely too given the latest election results from Canberra. Melbourne may not be the federal capital, but she takes this role in all but name.

What does the book tell us about this city of design? That the infrastructure is a key template, unifier of many disparate communities, no more divided. That the multi-ethnicity of Melbourne, now a century and a half in the making, is developing as a positively vital cultural ingredient. That this is still a city where sport predominates, despite efforts to infiltrate this hegemony. The best of architects, such as Sean Godsell and Greg Burgess, also happen to have been no mean players in their time. Melbourne contains 40% of all Australians with a higher degree.

Historically, as the book shows, there have been good and bad imported architectures. From England there is William Butterfield's St Paul's Cathedral (1878), a Gothic Victorian masterpiece, which was ineptly amended externally in the 1930s (there was no John Betjeman to save it). To the good, there is Nicholas Grimshaw's remodelling of Flinders Street Station in the centre. The downside is demonstrated nearby, in the late Kisho Kurokawa's speculative developer work.
Melbourne University itself gets short shrift here (what else to expect with van Schaik predominant at rival RMIT?).

However, the university did recently commission a masterwork by Peter Corrigan, the Study Centre at Newman College there. The differences between these two educational institutions sponsor an enlivening, stimulating and ongoing conflict of minds.

Long ago in this 'settler city' a prim Protestantism was the cultural determinant: this has been dispensed with by a surge of multi-ethnic vitality. Van Schaik accelerated the development of a flagging artist/architect community. This had existed, in parts, at the time of the painters Arthur Boyd and Sidney Nolan and the architect Robin Boyd, the Angry Penguin movement, and the radical artist Noel Counihan. An infrastructure of disparate art galleries continued to exist. But by the 1980s this was flagging. Van Schaik brought in a new cohesion, of art galleries sponsoring joint artist/architect shows and projects. This was a hit. But there are some gaps in van Schaik's line-up: the sport-dominated media still provide less of a forum and less coverage (much of it indiscriminate) than it could. As in Europe, there is no arts equivalent to the intense tribalism that sport generates.

For all its 'globalisation', Melbourne still remains remote other than in terms of cyberspace. The city now is no longer obliviously picking up second-hand global patterning. Van Schaik's architects (and artists) are fanning out to Asia, California and Europe, not just hosting incoming so-called 'International Architects' (a series that flourished in the early 1980s but was on the way out).

Melbourne still needs its grand architectural gesture, in the spirit of the iconic Eiffel Tower and Sydney Opera House. There is an idea for an elegant, copper-sheathed cone close to the Arts Centre, Melbourne. Architect Tom Kovac and photographer John Gollings (who took most of the images in this book) have proposed this with Leon van Schaik's major support. Go for it, Melbourne! 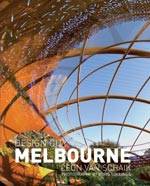