Vagrich Bakhchanyan was a follower of the Russian avant garde and a precursor of Moscow conceptualism and Sots art, as he strove to highlight the deadening absurdity of Soviet authoritarianism and officialdom

Anyone interested in Russian art and its firm grounding in history, as well as its seemingly unending search for utopia, should visit the first US retrospective of Soviet dissident artist Vagrich Bakhchanyan (1938-2009), currently on view at the Zimmerli Art Museum in New Jersey. Bakhchanyan was trained in the art studio of a workers’ club in Kharkov in the late 50s and early 60s by artists including Vasily Ermilov, Alexander Kosarev and Alexei Shcheglov, who were keeping alive the tradition of the Russian avant garde during the time of the postwar stagnation. From them, Bakhchanyan learned the importance of working with materials and paying attention to the process of the work’s production. In the 60s and 70s, he was known for absurdist works on paper, and word puns that made fun of representational cliches of Soviet life. After Bakhchanyan moved to the US in 1974, he continued to make art under the aegis of Fluxus.

As a Fluxus artist, he engaged a variety of visual media, including sculpture, performance, photography and the graphic arts. Even though the works he made after he emigrated did not resonate among his cohorts in the US as much as those he made while among the artistic community in Russia, there is a clear continuity between his practice before and after his move to the US. In both periods, Bakhchanyan’s art spoke of his anxiety about the state of a world that was at odds with the conformist idea of it being a comfortable place in which one could feel happy, secure and loved. This was the founding myth of the Soviet Union into which the artist was born. The Russian avant garde played along with this myth for a short while, until it became clear that the reality of life did not correspond even remotely to the myth, turning the avant garde’s initial enthusiasm into subversive irony and making it disappear from the officially sanctioned circles into the precarious existence of unrecognised and subversive art.

The exhibition contains approximately 100 works divided into four sections. The earliest are works on paper from the mid-60s, made when Bakhchanyan still lived in his native city of Kharkov in the Soviet Ukraine and worked as a caricaturist in factory newspapers. These early works are transfers on paper – a technique of fusing images by pressing wet newspaper print on to blank paper in a manner similar to decal. They are difficult to place in terms of representational references. Several of these early images are reminiscent of Max Ernst’s frottages and overpaintings in their intimacy of scale, delicacy of technique and the apparent incongruity of juxtaposed elements, which taken together add up to a dream or a story. The compressed space of these works, however, is not surrealist. It is closer to the cubo-futurism of such artists as Kazimir Malevich, Olga Rozanova, Aleksei Kruchenykh and Mikhail Larionov.

In his early creations, Bakhchanyan displays a tendency towards the absurd, characteristic of the Oberiu formation in St Petersburg, and of Dada in general. This absurdist leaning is evident in the Untitled from 1964 – a page from a barely legible handwritten letter superimposed with a portrait of a man. The man is staring dreamily into the distance while resting his chin on his hand; the letter is barely legible, obscured by the portrait and smudged ink. The form highlights the indeterminacy of expression: the gaze of the man, the outlines of his face, the handwritten letters shimmering, without resolution or clarity. The sitter’s unresolved look is frozen in permanent wonder and longing, staring into the eternal distance. The work is simultaneously ironic and serious, seemingly casual in execution, but classical in its references to the masters of the avant garde, who used printed-page format and a combination of word and image to make art in the form of artists’ books. Even though each of Bakhchanyan’s works has at least a trace of the subject matter, the artist was extremely attentive to the way in which the work was made. Early on, he switched from collage to transfer on paper to avoid making images that would have yellowish traces left by low-quality clay, the only kind he could get in the Soviet Union.

Like a true follower of the futurists, Bakhchanyan structured his art and his life in such a way that he was constantly critically probing the quality of Soviet reality on the level of the intersection of sign and its context, word and image. Before his move to the US, he established his reputation as a leading caricaturist for Literaturnaya Gazeta, a major literary newspaper in the former Soviet Union. His drawings for the section 12 Chairs at the end of the paper were pithy and laconic, composed of multiple images in the manner of ideograms. They were shown during the official opening of the exhibition in Andrei Zagdansky’s documentary about the artist Vagrich and the Black Square. It is unfortunate that the satirical drawings that made Bakhchanyan’s name widely known within the official Soviet culture were not included in the retrospective. However, this omission was made up for by the inclusion of covers for the Russian-language periodical Seven Days, published in New York by immigrant writers Alexander Genis and Peter Vail. Bakhchanyan’s design for the covers relate to his drawings for the 12 Chairs section of Literaturnaya Gazeta. Like his earlier published drawings, the covers are ideographic constructions, coded images that lend credence to Bakhchanyan’s reputation as an unassuming genius who prepared the ground for such well-known names as Il’ya Kabakov, Leonid Sokov and Komar & Melamid, among others.

Bakhchanyan’s poetic brilliance is evident in such works as the satirical Classified Section for the People published in the newspaper Novyi Amerikanets (the New American), No 189 from 26 September – 2 October 1983. The spread of the newspaper contained his aphorisms, which made him famous in the country of his birth and among the Russian immigrants in the US. Like Velimir Khlebnikov’s poetry, these expressions play on metaphoric ambiguities in the Russian language. Because of this ambiguity, they are difficult to translate into English adequately. Translations such as “We Are Here to Turn Life into Kafka” are correct in conveying the sense of Bakhchanyan’s locution, but omit the poetic rhythm and historic context of the reference. An English speaker or a Russian removed from the cultural context of Soviet life is likely to miss the reference to the famous March of Aviators written in 1923 by Iulii Khait and Pavel German, from which the artist borrowed this line, substituting the word “fairytale” for “Kafka”. This ineffable sense of context was crucial for Bakhchanyan, whose move to the US was tragic because he lost the immediate connection with the cultural environment that nurtured his imagination.

As far as artistic expression is concerned, after emigrating, the cultural environment Bakhchanyan abandoned became condensed into the person of the artist. The artist’s post-immigration works betray his attempt to fit into the context of contemporary American art while also becoming self-referential – his one-man performance in the Museum of Modern Art, conducted on 13 June 1978; his photographic self-portraits made daily in the beginning of 1979; trash collected in Central Park and packed into bottles on the day he turned 60 years old; personal telephone conversations meticulously recorded in large telephone books – albums, in fact, since each record is a drawing made during the conversation. While in the Soviet Union Bakhchanyan turned to the aesthetics of the absurd in order to find an adequate way to relate to ideological falsity and pretense that permeated every pore of Soviet reality; in the US, the absurdist quality of this art became diluted, becoming a narrated, staged and archived record of his daily existence. For example, a scene in Zagdansky’s documentary shows the artist reading aloud in Central Park a self-made book, Not a Day without A Line that repeated one sentence ad infinitum varying only the date when it was written. As absurd as this action may seem to any casual passerby, as a Fluxus artist, Bakhchanyan continued the legacy of performers such as Alison Knowles, for example, who made habitual, everyday actions the subject of their art. The title of the artist’s retrospective then, Accidental Absurdity, may imply that the Soviet period of artist’s oeuvre was “accidental” in the sense of his striving to escape from the restrictive and hypocritical environment that nurtured his absurdist leanings. After seeing the exhibition, I would argue instead that Bakhchanyan’s absurdism was a logical choice of an aesthetic tradition that allowed him to come to terms with contradictions between two kinds of life: one prescribed by ideologies of officialdom and the other devoid of ideologies, but filled with making art – the kind he chose to live. His life came to an end when he could no longer make art. 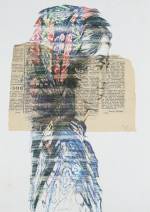 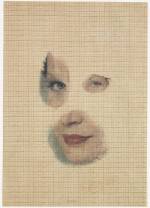 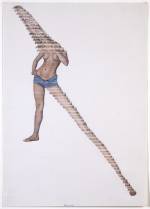 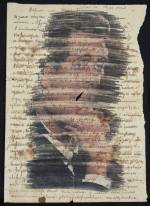 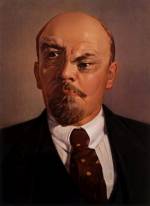 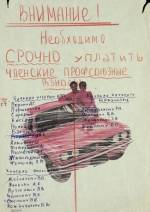 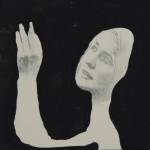