While the recent, ambitious 'RUSSIA!' show at the Guggenheim Museum in New York was a bit thin on the artists associated with the Ballets Russes, the travelling exhibition, 'Mir Iskusstva: Russia's Age of Elegance', provides a compelling introduction to the twilight of the Tsars. The State Russian Museum in St Petersburg, in conjunction with the International Foundation for Arts and Education in Bethesda, MD, have pulled together more than 80 paintings, drawings, prints, sculpture, ceramics, posters, book and stage designs from the Silver Age of Russian Art. 'Mir Iskusstva' has already been shown at the Joslyn Art Museum in Omaha, NE and at the Weisman Art Museum in Minneapolis, MN, and finishes at the Princeton University Art Museum in New Jersey on 11 June.

'Mir iskusstva' means 'World of Art' and refers to an art magazine, a series of exhibitions and the artistic circle of Serge Diaghilev and Alexandre Benois. With their motto, 'Art for art's sake', many of the movement's designers may seem frivolous when compared with the intense, socially committed Modernists who succeeded them. The Soviet avant-garde came up with the term miriskusniki to describe all that was decadent and passé in contemporary art. The eclectic World of Art aesthetic might be called Russian Art Nouveau, in which style was more important than content. Benois and his associates embraced all the arts; the decorative as well as the plastic. The most famous manifestation of Mir iskusstva was the Ballets Russes, which brilliantly combined music, painting and dance. Diaghilev's productions (that were never actually performed in Russia) were famous for their bold colour and rampant sensuality, especially those designed by Leon Bakst; but there are surprisingly few costume and set designs in the current exhibit. The curators have concentrated on other areas of this movement that are less known in the West.

The most impressive works in the show are the portraits of many of Russia's literary, art and stage luminaries. Boris Kustodiev, the greatest of these portraitists, brought all the major figures of Mir iskusstva together in a handsome sketch of aesthetic unity and friendship for a group portrait that was never painted. Working in a manner reminiscent of Whistler, Kustodiev captured the young charmer, Ivan Yakovlevich Bilibin, decked all in black and white except for a carmine carnation. Kustodiev redeems his rather tame self-portrait of 1905 with a monumental picture of the famous opera singer Fyodor Chaliapin at a winter fair. It is all the more remarkable when one learns that the artist was half-paralysed at the time he painted it. The same arrogant intelligence of Chaliapin is evident in Bakst's painting of Diaghilev, where the shock of premature white in his black hair lends the impresario the haughtiness of a pre-revolutionary male Susan Sontag. The creamy brush strokes of Konstantin Somov's picture of his lover, Methodius Lukyanov, indicate exactly what attracted the painter to the elegant gentleman. Somov's portrait of the pianist Serge Rachmaninoff is far more conventional, having been commissioned in 1925 by the Steinway & Sons piano company to hang in the hall of their New York showroom.

Modernity creeps gently into some of these pictures. Cubist elements are evident in Yuri Grigoriev's portrait of the great director Vsevolod Meyerhold and Yuri Annenkov's portrait of the photographer Miron Sherling. These paintings perhaps belong more to the post-revolutionary Soviet Union than to the Silver Age. Less successful is cartoonist Nikolai Radlov's painting of the Symbolist poet Mikhail Kuzmin. It looks like a caricature. The most striking of these post-Cubist portraits is Natan Altman's 1915 picture of Anna Akhmatova. In her blue dress and bright yellow shawl, the angular poet looks like an elegant Slavic Virginia Woolf.

The women's portraits are more revelatory than the men's. The feline expression on the lady's face and the thrust of her supple body in Bakst's portrait of Benois' wife, 'Supper' (1902), oozes with the sexual allure the painter brought to his stage designs. The landscape artist, Anna Ostroumova-Lebedeva, never thought Valentin Serov's melancholy portrait of her captured her true spirit, but it is a stunning picture nonetheless. Russian painters are not famous for their nudes, and that may be why Serov's picture of the Jewish dancer, Ida Rubenstein, wearing nothing but rings on her fingers and toes, was as shocking to St Petersburg society in 1910 as Manet's 'Olympia' was to Parisians in 1865. While her brashness is still jarring, the picture is more a coloured drawing than a painting. The bisexual Rubenstein, who danced naked in a private performance of 'Salome', was in her day considered a great beauty; but today her charms have evidently faded. One of the pleasant discoveries of this show is the young Zinaida Serebryakova. Her pretty self-portrait of 1911 indicates that she herself must have posed over and over for the zaftig bathers in her shimmering 'Bath House' (1913). Her style might be called Russian Mannerism. It has all the polish, sheen and precision of the better known and vastly overrated Art Deco portraits of Tamara de Lempicka. The frank sensuality of Serebryakova's bathers is missing from Kuzma Petrov-Vodkin's oddly baleful orange nudes, like Cain and Abel on an emerald green hill beneath a cobalt blue sky.

Landscapes are few and far between at the Princeton University Art Museum, although there is a fine vigorous study of a provincial fair booth in winter by Kustodiev. Benois' views of Versailles are no more than lovely sketches. Ostroumova-Lebedeva's cool, elegantly balanced colour woodcuts of pre-revolutionary gardens, parks and palaces contrast beautifully with Mstislav Dobuzhinsky's rugged, frenetically charged lithographs of St Petersburg under reconstruction. The World of Art group became internationally known for their graphic works - everything from postcards to sheet music covers. Many Mir iskusstva artists were masters of book illustration and there is a fine smattering of children's book art by Benois, Bilibin, Dobuzhinsky, Dmitry Mitrokhin, Georgy Narbut and Elena Polenova. The Cotsen Children's Library within the Princeton University Library has mounted a small auxilliary exhibition, 'Mir Isskustva: Masterpieces of the Russian Picture Book', with the loveliest examples of the period. It is a shame the librarians leave the lights off in the cases.

Perhaps some restraint prevented the curators from including any of the more scandalous and sometimes scatological designs from Somov's notorious Beardsley-esque Le Livre de la Marquise (1918), perhaps the most infamous example of Russian erotica. The two drawings exhibited here are surprisingly chaste when compared to the lithe depravity of others in the volume. Somov's use of elegant visual double entendre in his ornate neo-Rococo silhouettes anticipated the more violent and politically charged work of the contemporary African American artist Kara Walker. Grigoriev and Mitrokhin, too, produced 'indecent' books missing from the Princeton exhibition.

The World of Art did not last long. Most members who survived the Revolution swiftly scattered to other parts of the globe. Even if 'Mir Iskusstva: Russia's Age of Elegance' does not fully explore all aspects of this doomed movement in Russian art, the show nevertheless includes many remarkable and rarely seen works by some of its most gifted and influential artists. 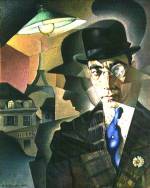 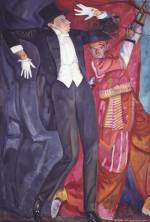 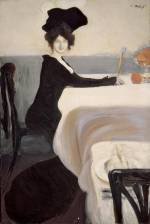 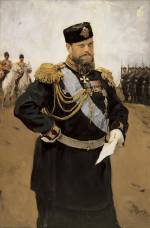