Gilbert and George has arrived at Tate Modern (and not at Tate Britain, at their own insistence). They claim that they are, for the period of this exhibition only, a part of the art 'establishment': after which the duet will be outside again, very much by choice

Yet there are key issues here about what Gilbert and George do represent, as an operating partnership in this critical world. In a shifting milieu composed of amorphous players of the art game, of crazy and escalating contemporary art prices, and bemused and jumpy critics and writers, Gilbert and George stands as a single entity, for integrity, humanity and creative credibility and authenticity, no less. But to what end? They provide regularity, normality, stability. Which is not how the exhibition at Tate Modern looks, but how it is in its fully accumulated sociocultural impact. 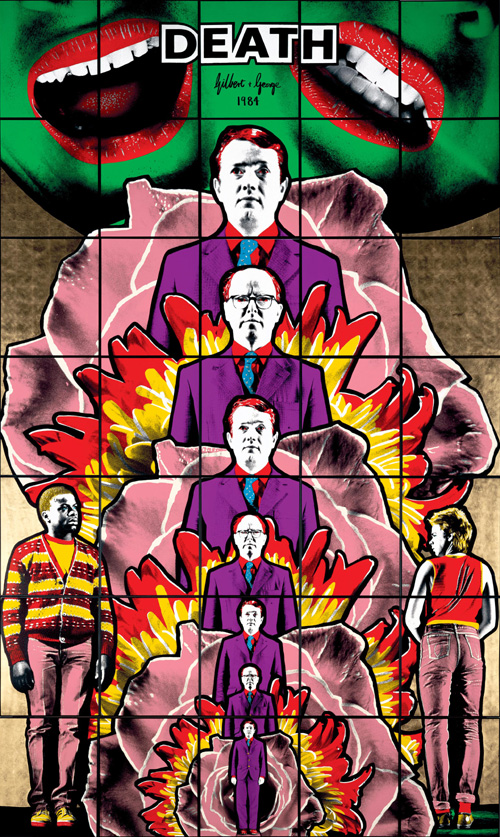 It is this unimpaired regularity as expressed in their private, daily routine, close to Brick Lane in East London (and its historical resonance as sanctuary for all outsiders of the productive sort, Huguenots, Jews, Asians) that counts. The immaculate Gilbert and George house in Fournier Street (with attached workshops) is restored under a craftsmanlike ethos. Like a polished clock that strikes the hours - mechanically perfect, its mahogany case glowing, acoustically well tuned - day in and day out routine pervades their life. Here is a template far closer to a monastic rhythm of life and devotion than anything else.

The well-suited (but not over-dressed) couple get up and walk a short distance for breakfast to a local restaurant, every morning. Always the same fare is provided there for the couple. Then they return and work begins. For lunch, they again repair to the same East End restaurant. And so in the whole of the remains of the day this rhythm is established and pursued, not just on this particular day, but every day, of every month, of every year. The process is completely work-focused, with time (which would otherwise be demanded in the kitchen - there is no kitchen in the house) allocated to the continuity of the work. Now Tate Modern reveals the full range of this legendary output, conveyed religiously from the small but immaculate East End house to the cavernous cathedral of Tate Modern. 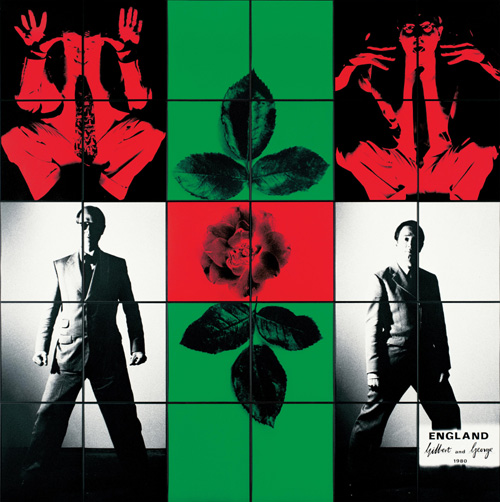 Gilbert and George have been known to complain about bad treatment over the years by the London media. But today, at the opening, that is all over: they are justly celebrated in Mammon's temple of all the arts. Right back to their successful starting grid at St Martin's School of Art, they have learnt to disassociate themselves from established groups, from the well-meaning tentacles of Fluxus, or Arte Povera. They eschewed the principle of 'art for all' in those days, a quest which could create its own subtle entrapment by the media. And so they disassociate, turning in on themselves and containing their inherent humanity. The more urban detritus around and ensuing faeces they explored, the stranger that could become. Gilbert and George were also in advance of such cultural tendencies as 'punk' and Brit Art/YBA camp followers. Further, their London is not that of Hogarth - lascivious and a touch smug, however brilliant the humour and technique. It is, instead, the dwell-in collage of a threatened humanity. 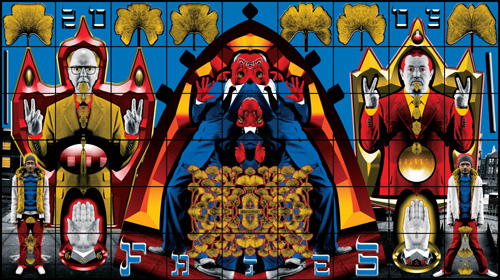 Early on, Gilbert and George found that their ethical consensus was crystallising as a critique of metropolitan culture. It is surely a remarkable coincidence (but coincidence it seems) that Tate Britain offers Wallinger's 'State Britain', Hogarth, Tate Modern and Gilbert and George all overlapping together. The Fournier Street house stands vulnerably, it seems, on the edge of this metropolitan/cosmopolitan phenomenon. Such art always seeks a response; as does urban rail track graffiti - plaintively, but with essential humanity. 'Who am I, where am I?', the hieroglyphs shout out unanswered by the streaming commuters. 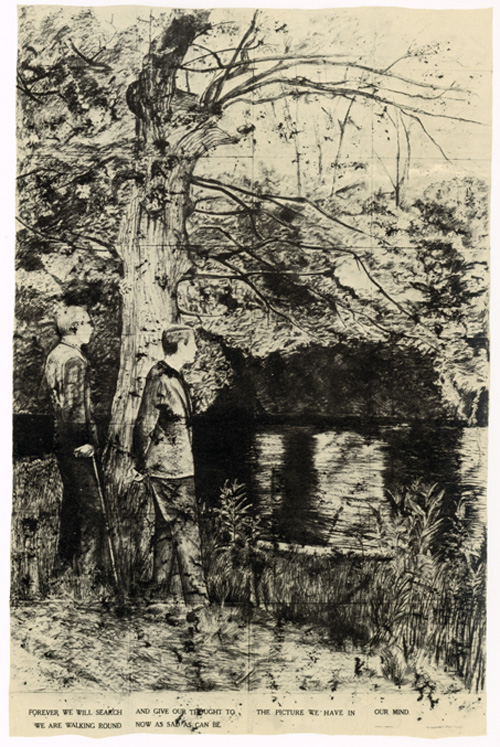 Gilbert & George. The Nature of Our Looking (1970) 1970 Tate © The Artists A five-part charcoal on paper sculpture

But this vulnerability is only superficially apparent, in the case of Gilbert and George, and decades have substantiated their message, their meaning and the international as well as national response has been to seek more of the same, as now at Tate Modern. There in a late room, is the quadripartite '1999', essentially a monument erected for the fallen in war. The visual presence of Gilbert and George hovers and looms now over the scenario. They are on record, in one of their recent interviews, as saying: 'We like to be moral'. (Gilbert). 'We never use a subject until we find a moral dimension. We don't make art for selling, we make it to confront people.' (George). 'We would never show attacking or killing.' (Gilbert). 'We don't even like it in the movies, it's so artificial.' (George). This approach is epitomised in the six images at Tate Modern: 'Bomb', 'Bombs', 'Bomber', 'Bombers', 'Bombing' and 'Terror'. The works comprise a straight memorial to those killed, like the countless world war monuments up and down Europe paid for mostly by working class or lower-middle class subscription in the aftermath. 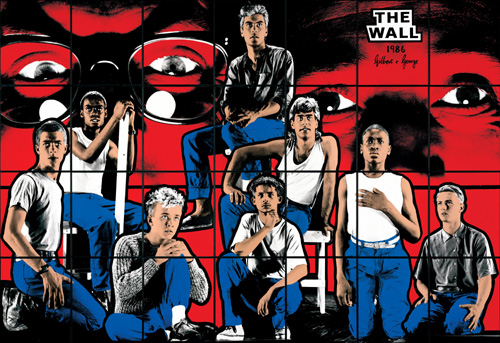 Returning to Fournier Street, in the East End of London, one is reminded that bourgeois respectability by immigrants from France created that area, which rose to prosperity, sank and now rises again through Asian enterprise. The ethos of craftsmanship has been saved, however, and is cherished in Gilbert and George's reconstruction and rehabilitation at Fournier Street. One can imagine G and G returning with some relief from the razzmatazz of the opening to the domestic scale there again, to the normality of that environment. The next morning, as usual, at the appointed hour, the front door opens. They walk to the restaurant again, neatly suited as always. It is this underlying concept of privacy, individualism and care for their fellow human beings that extends the equanimity of Gilbert and George into a living, walking paradigm of city survival. Gilbert and George remain two completely revolutionary artists, who have stayed wholly on course in their critique of the hollow core of post-modernist culture. Critics and media may still try to trip them up, but it is the couple who will always be a full and simultaneous jump ahead.