The film Director Andrei Tarkovsky died at the age of 54 in December l986. This was a tragedy at such a young age and a severe loss to the development of film culture. Considerably younger than the generation of great directors, such as Bergman, Antonioni, Kurosawa and Fellini, he preceded them all into history creating his own genre, largely on the basis of seven great films. He always saw himself as a Soviet filmmaker the product of a line that started with Eisenstein or, as he would have it, Alexander Dovzhenko, possibly for him a greater precedent and influence. Although Soviet Russia, under Mosfilm, recognised his exceptional talent and ultimately applauded him, he had a rough ride initially. He was given a thorny testing and a profoundly difficult early passage, through the various controlling state auditors and committees.

His films continued to be defined by ‘cold war politicisation’, yet his sheer brilliance as a poet and an artist in his chosen medium ensured that he accumulated a major and continuing following in the West. Robert Bird tracks all this with remarkable insight and as a Russian speaker has been able to research archives and individuals there which enhance the scholarship of this monograph from Reaktion. Today his work remains a keystone in Russia’s continuing sense of her own cultural identity in the present century.

More significantly perhaps, for the wider world, his films have had a major influence on such as the Scottish-American video artist Douglas Gordon (as in his video installation 24-hour Psycho). One of the strengths of Robert Bird’s new work is his perception of such influence and, for example, on the interesting work of British video installation artist Mark Wallinger, such as his Via Dolorosa quoted by Bird. The author recognises and substantiates the extent to which Tarkovsky’s films continue to function creatively today within the realm of contemporary art and can continue to extend an important contribution to theory.

Tarkovsky attracted critical debate even as his early film, Ivan’s Childhood, impacted on the West, winning the Golden Lion at the Venice Film Festival in September l962 (when the author was still 30) and in November of the same year he received the prize for best director at San Francisco’s Film Festival, ’for the powerful style and the poetry of his images’. An argument was stimulated between no less than Alberto Moravia and Jean-Paul Sartre about aspects of his work. In Moscow the film received a ‘high evaluation’ from the Ministry of Culture. Ironically, because the film had been made by the Children’s Unit of Mosfilm, bureaucracy ensured that the film was only shown throughout Russia at afternoon matinees, so unheralded: but it became nonetheless an overwhelming success.

Robert Bird groups Tarkovsky’s films in four sections, based on Tarkovsky’s own inspirational given sources, as: ‘Earth,’ ’Fire,’ ‘Water’ and ‘Air’- so elementally in this way. ‘Earth’ characterises the epic Andrei Rublev. Tarkovsky sought to make a plausible impression on the controlling committee. As work proceeded, the film experienced wavering support, but on completion one official alone of the Ideological Section of the Central Committee helped to get the film screenplay published which secured finance. The ostensible ‘Russian-ness’ of the film, plus Tarkovsky’s own skilful use of ‘officialese’ in arguing its case ensured that it could be shown, officially on a non-competitive basis, at Cannes, as was the space saga Solaris,which followed. For the following film, Nostalghia, (Bird uses the Russian spelling to express a stronger meaning) there is an evident degree of romanticism when Tarkovsky uses a painting by Caspar David Friedrich, Ruin at Eldena (1824) as his inspiration for one film setting.

Tarkovsky’s film Stalker, perhaps the antithesis of Solaris, was made seven years later, and deals with an abandoned industrial zone (in fact filmed in Estonia), which ironically anticipates the devastation of Chernobyl, following the nuclear power station disaster. The director also seems to have well foreseen the current global awareness and concern for the planet, not evident in the 1970s. Tarkovsky here develops a manner of using time sequence, without lapses between shots, so the passage of time is revealed clearly in each frame. At the Cannes film festival of 1983 the Soviet delegation sought to undermine the work, Nostalghia, so preventing any award. But together with Robert Bresson, his mentor, he received a special prize. Tarkovsky soon found that he was prevented from return to Soviet Russia. Soon afterwards he died in a Paris clinic of cancer. In 1990 he was posthumously awarded the Lenin Prize. He had previously written to his father, the patriotic war hero and poet Arseny Tarkovsky: ‘Just as I have remained a Soviet Artist, so do I remain’. His own loyalty to his country and even to its regime was never in question.

Now, 22 years after his death, Tarkovsky’s reputation remains solid, as perhaps the last of the great twentieth century masters of film. His films and their canonical position continue to be researched and analysed in film schools, and in the broader range of critique. The enigmatic and haunting later film Mirror gave him the greatest struggle with Mosfilm, but was perversely allowed in the end as a ‘vanity’ project. Bird is not alone in having trouble following its complex structure, and quotes in mitigation how Tarkovsky had his own trouble editing it: and then, ‘the material came to life; the parts started to function reciprocally… the film was born before our very eyes. For a long time I still couldn’t believe the miracle, the film held together’. As Bird says, ‘the diverse strands pulled together a miracle of montage’. Tarkovsky avoided the editing technique, usually applied by Eisenstein, and so acted to join rather than to divide, a kind of weaving process.

It is interesting to relate that early in his career, when Tarkovsky left the Moscow Oriental Institute, having studied Arabic, he went on a geological exhibition to the Far East, a not totally uncommon subject for Russian literature and, indeed, film. In the early 1970s the director Youri Solomine could make a film of the famous journey of Vladimir Arseniev, a Czarist officer to survey the Sino-Soviet border, much aided by a Siberian shaman, whom he adopted called Dersou Ouzala. (This was narrated in Arseniev’s famous travelogue published between the wars.) Arseniev died in 1930 but Solomine’s film became a classic. This illustrates the profoundly Russian tendency to reach forward to explore unsurveyed territory, (metaphorically too) and on the other hand to seek to preserve an essential Russian affinity with nature. All this Tarkovsky displayed in his work. The peculiar difficulties and complexities of working with Mosfilmin their contrary way may even have been an anvil upon which Tarkovsky was able to forge his own masterpieces. Sadly his early demise put paid to the possibility of seeing what came to fruition for Tarkovsky in production outside his homeland.

Robert Bird’s monograph on Tarkovsky of course follows, among other publications, Andrey Tarkovsky’s own Sculpting in Time: Reflections On The Cinema, published in 1986,and most ably translated by Kitty Hunter-Blair (1986). Bird now adds for us this valuable work which analyses closely the full oeuvre of a key twentieth century film director - not only in terms of his contribution to the art of film, but also of his influence on video, which continues today. The book is comprehensively illustrated with stills from all the major works. 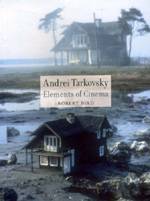