Most recently the architect Kengo Kuma from Japan has been commissioned by the Victoria & Albert Museum, London to build it a new arts centre in Dundee, in consortium with Design Dundee Ltd (DDL), a partnership between the V&A, Dundee city council, the University of Dundee, the University of Abertay Dundee and Scottish Enterprise. Kengo Kuma won the competition to design the building against an impressive field, including Snøhetta from Oslo and Steven Holl Architects from New York.

The site abuts the city centre yet is a dramatic place on the waterfront facing southwards over the notably tidal Firth of Tay and adjacent to the permanently moored masted steam vessel Discovery. This 20th-century Dundee-built ship is famous for being the vessel used for Scott’s first, successful expedition to the Antarctic in 1901-4. Kengo Kuma’s scheme initially stood partly in the water, but for reasons of economy the proposal has been moved a short distance inshore, although it has not lost any of Kuma’s magical vision. Here also, without artifice, it creates a visual link to the iconic ship’s history and the conjunction will remind viewers and Dundonians about the city’s past as a vibrant port. The double, low massing of this built volume is redolent of the iceberg mass of an Antarctic landscape, yet will elegantly convey a positive insertion to the city and points up its treasured and symbolic vessel, once somewhat marginalised but now emblematic at the sea approach. Here Kengo Kuma and Associates demonstrate a succinct mastery of poetic construction. The transformative effect of this building on a city that is still engaged in reversing post-industrial decline will prove a model for future urban insertions.

But as revealed in the book, this newly planned structure is a direct successor to a sequence of completed buildings, mostly in Kuma’s homeland. Three new schemes have been built that, like Dundee, postdate this 2012 book: the Asakusa Tourist Information Tower in central Tokyo, a school at Tama, to the north-west of the city, and an iconic house, far away on the most northern island of Japan at Taikicho, Hokkaido. The house perfectly fits Kengo Kuma’s philosophy of non-objectivity, as does the tourist information centre, whose materiality and use of wood is presented in a format that echoes the forms of previous centuries.

Kenneth Frampton has produced this oeuvre by recognising that Kuma is engaged in a subtle reversal of urban territoriality. This volume, through Frampton’s clearly articulated rationale of the sequence of Kuma’s work, not only allows us to recognise the underlying principles of design there from the beginning, but, interestingly, also reveals Frampton’s own philosophy, honed from a distinguished set of major instances as published over 40 years. His early history of modern architecture1 proved something of a corrective to the romantic, technologically inspired excesses of P Reyner Banham. With several early appraisals of Japanese work, first visited more than 30 years ago, critically Frampton opened the debate about a new wave there. In the 1980s his key article on Critical Regionalism (in Hal Foster’s compendium)2 developed such principles of community and location that hitherto had barely been specified. Significantly, his thoughts on the New York Five, architects covered in a much earlier volume with an introduction by Colin Rowe,3 published by the late lamented dealer Wittenborn, helped to draw together these five varied yet interactive talents. Most recently, Frampton’s Studies in Tectonic Architecture4 placed the poetics of construction in a clear focus that dispersed the fog of mid-term postmodernism with a clear evocation of the fundamental role of structure in architecture: indeed, its inherent validation of meaning. This, in all, forms a key corpus of theory against which to assess a leading and original contemporary designer such as Kuma, who now has his own major following in Japan, and increasingly around the world. The main text of the work, per project description, is written by Kuma himself, with an introduction by Frampton. They constitute a formidable combination. To clarify the role of precedent for him, Kuma points out his disconnection from Tadao Ando and indeed that generation, which includes Toyo Ito – and the late Kisho Kurokawa, although he is not mentioned – for similar reasons. Kuma represents nothing less than a break with their manifold legacy. Instead, he refers to the fundamental effect that the German architect Bruno Taut had on his philosophy as these projects developed in his practice over the 26 schemes covered here. Indeed, Taut provides a paradigm of the difference between European formalism and Japanese naturalism (that which so moved Taut, a fugitive from Nazi Germany, at Kyoto in 1933).

Today, Kuma’s cultural range includes film, as by the Japanese masters Akira Kurosawa and Hiroshi Teshigahara, but also French film-maker Alain Resnais. Kuma, as described by Frampton in his introduction, epitomises a focus on “particalisation”, referring to those communities devastated by the tsunami and nuclear accident in March 2011 with whom he has maintained personal links. Indeed, Kuma casts back to the man-made catastrophe of Hiroshima: this extends a mood, a mindset, that is anti-consumerist, even anti-capitalist in terms of today’s issues. The Kuma design context is of nature, its materials and processes upheld in a benign landscape (even within the urban buzz of Tokyo). Form becomes conformation, climatic factors play in the Japanese vernacular idiom: the wall always as defining element (viz. Kengo Kuma’s Yusuhara town hall, or at the Great Wall of China); the retrieved use of the double-pitched roof (Nakagawa Museum), even of the thatched roof (Takayanagi community centre) or wall (Yusuhara Marché hotel). Materiality is always explicit: the tectonic qualities of wood are exploited non-traditionally, whenever possible. Likewise stone, in Frampton terms, “stereotomic” is even, one might add here, autochtonous, as if sprung from the soil. The calculated, structural breaking point of stone is also expressed on occasion when steel is brought in, like a crutch to pick up the point of calculated destabilisation (a kind of witticism, it seems, for the unwary critic). Perspectival views are readily abandoned – witness the historic drawings of Hiroshige Ando. The definition of “phenomenological transparency” as defined by Rowe and Robert Slutzky5 incidentally seems to fit, although Frampton tactfully declines to refer back to this topicality of the 1950s: yet several of Kengo’s schemes appear to express this condition. As Kuma says, he had been brought up in a home environment living in buildings entirely of wood. Concrete is rejected as “explicit of modernity”. Water in motion neutralises the modernity imposed by glass in the Kiro-san observatory; for example, sea becomes related to an earthwork-come-pedestrian promenade set below a peak viewing “belvedere”. The book itself is divided into relevant chapters each describing the materiality of the work per project.

There can be shallow space and deep space, all interpenetrating as phenomena, and so revealing a coherent pattern. Slutzky had insisted that statements of flatness are provocative about depth: this quality is apparent in many Kuma schemes, and contradiction is always avoided by the same token.

The combination in this publication of Kuma and Frampton is fortuitous. Frampton’s record of works, and his consistency in a developing theoretical basis of critique (as in the particular items listed here), finds Kuma to be his own vindication, a hard-won case study perhaps not found before even in his critical span of 40 years. In each building category, the work is fully illustrated by photographs and drawings: Kuma’s own descriptions follow Frampton’s appraisal. Perhaps an even greater involvement by Frampton in the main body of the book would be a further consummation: and yet Kuma’s own clarity of writing far exceeds that of almost all architects (One is reminded of that of Palladio and his Quattri Libri). Yet Palladio had no Frampton at his elbow. This has been a masterly collaboration. Perhaps there could have been more technical drawings; further conceptual derivations by the architect’s own hand, but books have their budgets. This one is exceptional in fulfilling its role.

Today, the green shoots of a new generation of Kuma followers are already evident, such as Sou Fujimoto, architect of this summer’s cloud-like, steel-rod lattice that forms this summer’s Serpentine Gallery Pavilion. 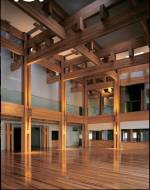 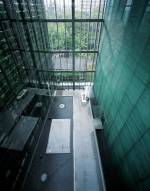 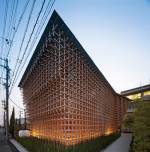 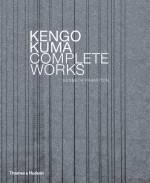