Born in Tehran in 1976, Ali Banisadr was three when the Islamic revolution took place. He and his family left Iran in 1988, moving first to Turkey and then to the United States. In 2000, Banisadr came to art school in New York, where he now lives and works.

He graduated from the School of Visual Arts in 2005 with a degree in fine arts, and from the New York Academy of Art in 2007 with an MFA. An artist with a rising international reputation, his supercharged, colour-blasted paintings overflow with an encyclopedic collection of cultural references. Unmistakable in appearance, they blend the heroics of New York School abstraction and the refinements of Persian miniatures and Japanese painting and drawing with techno-imagery, cinematic effects and much more, chaos and order deftly balanced. Part of the exhilaration is created by the multiple perspectives from which to scan the painting, the eye zooming in from a widescreen, bird’s-eye vantage point to the exquisite detail, the layered, intricately woven surfaces enhancing the already rich array of visual delectation. Banisadr’s most recent exhibition, Motherboard, was at Sperone Westwater in New York (1 March – 19 April 2014), his first solo with the gallery.

Lilly Wei spoke to the artist in New York about his new work.

Lilly Wei: Ran, a three-panel work – which, to me, suggests an abstract version of a Japanese painted screen of a battle scene from an aerial view – is one of your newest paintings and the biggest so far. Was it difficult to increase the scale?

Ali Banisadr: In every painting I make, I have to look at the scale and stretch out the figures so they fit the scale, and they got really stretched out in Ran. It became a lot of body movements, where in the smaller works it’s less so. And the top half of the painting is quite different, the paint applied to look mechanical. I wanted to get a digital effect, as if technology were invading the natural world, eating it up, destroying it. The top half was really satisfying to me, the way the thick paint was dragged over a semi-landscape.

LW: And what about Motherboard?

AB: I was trying to find a digital zone there, too, among four other zones. It was sound that was the driving force behind the painting. For me, paint translates into sound. In Motherboard, I heard a sound like an old modem dial-up. The bottom zone became the natural world, the next zone represented civilisation, the third the digital, and the last zone was the ether, everything disappearing into it.

LW: You have said you have a kind of synaesthesia, a confusion of sound and colour.

AB: When I begin a painting, it’s always based on an internal sound. As soon as I apply the paintbrush, the sound begins, and I’m able to compose the work based on the sounds I hear as I’m painting. It’s the force that drives the whole painting and helps me compose the work in the beginning and pull everything together.

AB: It could be the sound of something very heavy, machine-like, I don’t know how to describe it more accurately, but I can paint it. Or it could be the loud digital sound that I told you about. Or it could be a quiet tone in landscape or water sections. If things are ascending or descending, it’s a flickering sound, or like chimes. I build up layers almost like a musical composition, and all the elements are active and need to work together.

LW: Could your paintings be read like a musical score?

LW: Tell me how you started painting.

AB: I left Iran with my family when I was 12 in 1988. That was after the revolution and after the Iran-Iraq war. We moved to California; first to southern California and then up north. I got involved with the San Francisco graffiti world – it was a kind of golden age of graffiti – working with a huge group of friends and collaborators from all over. I was also doing my own work in the studio and studying psychology, trying to make sense of what had been with me since I was a kid, of sound turning into colours and images. I would make drawings based on the sounds I was hearing – bombs, air-raid sirens, windows breaking, all kinds of vibrations. This world was my internal world ever since I was a kid, and I wanted to find a way to connect to it. It was a parallel world, one that appeared as dreams, as fragments of memory, or as hallucinations.

LW: Were you in art school then?

AB: No, but I needed to go to art school so I could learn to execute better on canvas. I couldn’t go any further without art school and decided to go to New York in 2000 to catch up on really everything. While I was in art school, I tried to soak up all that I could – art history, art theory, skills – and I sat in on many extra classes in order to learn more. I put the works I had always been making on hold until my second year of graduate school. I was awarded a month-long residency in Normandy. [The art critic] William Feaver was there and gave us lectures on the history of the area, and one of the lectures was on the D-day sites. I saw some of the sites. They were so familiar to me, bringing back memories of my childhood and the Iran-Iraq war. I remembered seeing our neighbours’ houses cut in half; I remembered the giant hole in my schoolyard after a bomb dropped on it, and all the windows shattered around it. The images were sitting there all this time, but it was the D-day sites that brought them back to me. I started thinking of what I had witnessed and made some charcoal drawings based on the sounds of explosions. Everything became more comprehensible. It became a reconnection to the sound element, a direction I’ve been following since 2006.

LW: How does your dual heritage affect you?

AB: Well, if I were a Dutch painter, people wouldn’t be asking me that, but because I come from the Middle East, they do. I might use that legacy intuitively, but I am not intentionally combining eastern and western references to make a hybrid. I’m just an artist and a painter. My work will be categorised however it will be categorised, but I wouldn’t categorise it like that.

AB: Yes, the whole point of my work is that you bring your imagination to it, that you fill in the blanks, since they’re fragmented images. If I have a show in the Middle East or with Middle Eastern artists, they see Persian miniatures and even calligraphy, which is fine, whatever the viewer’s imagination holds. But still, no one talks much about [Willem] de Kooning’s Dutch heritage and he was raised and trained in the Netherlands while I was raised and trained in America. Or in art history, we’d skip over Japanese art. Why wasn’t that part of the dialogue? All the Impressionists and Post-Impressionists were so inspired by Japanese art and it was fine to be inspired by it and bring it into the western canon, but if it’s the other way around, it’s a problem. My interests are pretty wide – Persian miniatures, Japanese prints, Venetian painters, films, contemporary artists, comic books, any visual idiom that attracts me – and from it, I try to make something that’s my own.

LW: I know you’re very interested in film. How has it influenced your work?

AB: I’ve been very interested in [Akira] Kurosawa and Wong Kar-Wai, in Jim Jarmusch and Wes Anderson, and others. I watch the way they use composition, how they frame, how the narrative takes place, the way they use sound and other effects, and how those effects work with their visualisations. They come from an art background and make beautiful works in colour.

LW: Is beauty something you think about?

AB: Beauty is such an abstract word and can go in so many directions. I’m drawn to violence in film. There’s blood and mayhem and then the sound is muted and classical music might be introduced or something beautiful that is so opposite to what’s on the screen, and that contrast is exciting to me.

LW: How do you put that kind of contrast in your work?

AB: I like to point out the difference between what’s real and what’s not. In Persian miniature painting, for example, there might be a gruesome battle going on with nasty things happening, but it’s done in a beautiful way. In my case, what I’m doing is not documentation, not a historical record. It’s something parallel to what I see in dreams, where everything is moving, hallucinatory, the colours vivid, when I’m between waking and sleeping. That’s what I want to paint.

LW: Did you consider becoming a film-maker?

AB: Painting is the process that I enjoy the most. As an undergraduate, I tried different media to see what connected more to my imagination and it narrowed down to painting. In the end, I need to enjoy the process. I want to use a medium that is in dialogue with me, that has its own life but also speaks to me, and painting does that.

LW: And your process?

AB: It always starts very abstractly, no preliminary drawing or plan. I just begin with sound, as I said, the guiding force. It helps me compose the work and, from that, slowly, the narrative comes into the painting from the abstract, from the things I’m reading and thinking about, they all come into the painting day by day. They are a record of many different things at once, archetypes of many different things. They are very familiar, but I can’t point to where they come from specifically. When I am painting, it’s very reactive, an accumulation of reactions and very intuitive. It’s like a dance. But there’s more sitting and looking than actual painting. There are hours and hours of just looking. Sometimes I go to the studio and sit for eight hours without making one brushstroke.

LW: Since it’s so intuitive, are you afraid of losing a painting?

AB: I wreck paintings all the time, but I usually recover them; it’s a huge part of the process. The Ran painting – I thought I had destroyed the painting, it was dead, over, but I kept on going, and going some more, and then I looked at the floor for a moment and I looked up and it was done. So I can’t say how I make a painting. I could never say this is step one, this is step two, and so on. In the end, it’s just visceral, this layered painting with lots of additions and subtractions. 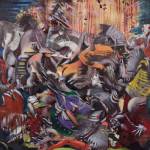