This exhibition, the first full-scale retrospective of Rauschenberg’s work since his death in 2008, takes us on a tour of a singly irrepressible spirit whose work knew no boundaries 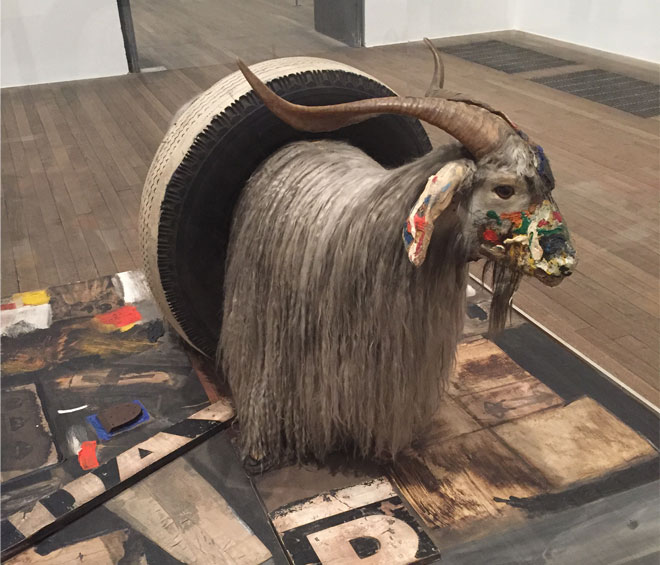 From the first room to the last, this exhibition celebrates a restless, playful artist who was experimenting with beds and taxidermy before Tracey Emin and Damien Hirst were even born. Robert Rauschenberg’s work spanned painting, photography, dance, printing, set design and installation from the comic to the downright scientific. He used clay and sound waves to create a tank of bubbling goo attached to a console that resembles a prop from the original series of Star Trek. He mixed toothpaste with paint, stuck umbrellas, road signs and desk fans to paintings, used his wife, Susan Weil to create photograms, and spent a month rubbing out one of Willem de Kooning’s drawings to see if a drawing could be created from an erasing.

Despite his credentials as somewhat of a visionary, Rauschenberg saw an artwork not as an expression of a single work of genius, but one of an endless universe of possibilities, possibilities that had the potential to impact positively on the lives of others. That Rauschenberg’s energy and collaborative spirit is instantly apparent in this exhibition is testament to its sensitive curation. He was an artist with an unusually generous nature in a time when egos dominated the American art scene. Currently, the Royal Academy’s high ceilinged galleries are playing home to his contemporaries Jackson Pollock, de Kooning and Mark Rothko, the giants of abstract expressionism. London is seeing an influx of American art. But while Rauschenberg was a part of this world, he was also separate from it. When in New York, he would visit the infamous Cedar Bar, where Pollock and de Kooning would meet, drink and argue. “They said that Rauschenberg would go there and be super-friendly and want to chat to everyone,” assistant curator Fiontán Moran told me. “He was very enthusiastic and they never really took him seriously. They thought he was very nice but they didn’t think he was a contender.”

It goes without saying that they couldn’t have been more wrong. More than any other artist, Rauschenberg set the tone for the art of the second half of the 20th century, both borrowing from the old and pre-empting the new. One of the first pieces in this exhibition is Automobile Tire Print (1953), a long and unexpectedly elegant image. Rauschenberg asked his friend, composer John Cage, to drive through a pool of ink and over 20 sheets of typewriter paper, producing a long print that is both a record of the life of the tyre, with all its imperfections, and its short journey across the pages. It is a work that is at once abstract and representational and one in which Rauschenberg described Cage as both “the printer and the press”. Collaboration would be a recurrent theme throughout Rauschenberg’s career and would see him drawn to the modernist choreographer Merce Cunningham, and the artists Cy Twombly and Jasper Johns, with the last two of whom he later formed relationships.

Unlike many of his contemporaries who confined themselves to their studios, Rauschenberg took art-making out into the world and transformed painting into a theatrical spectacle. Some of his Combines, works that push and confuse the boundaries between sculpture and painting, were created on stage. First Time Painting (1961) was created in front of an audience who could only see the back until it was finished. It is partly indebted to abstract expressionism, with energetic, almost violent, brush strokes in black, red and orange, but it incorporates paper, fabric, sailcloth, an exhaust cap, sheet metal, adhesive tape, metal springs and string. And how did Rauschenberg know it was finished? There is also an alarm clock embedded into the canvas, and when it rang, he stopped work.

Rauschenberg’s drive to share his art with the world saw him set up the Rauschenberg Overseas Culture Interchange (ROCI), an exhibition that toured Chile, China, Cuba and Tibet, among other countries, countries that western art exhibitions rarely visited. He believed that art could cross cultural barriers and have a positive impact on society. “He loved working with people, and as an artist he was someone who was really full of enthusiasm for the possibilities of what art could be and never got stuck in one style or one kind of mode of working,” Moran tells me. In fact, legend has it that when he won the Gran Premio at the Venice Biennale in 1964, he ordered his assistant in New York to destroy all of his silkscreens so that he couldn’t repeat himself. “And I think that’s a really admirable quality, especially when an artist is achieving great success. That’s why his work will always be influential. He’s an artist who really wanted to experiment and discover new ways of making, an artist who questioned how art related to his own life and how it related to the world. I think that’s what makes him exciting and vital.”

When discussing an artist as prolific as Rauschenberg, it can be all too easy to neglect mentioning the aesthetics behind his work, but he achieved tremendously arresting images from the flickering screens and magazine pages of daily life. Some of Rauschenberg’s most recognisable screen prints include the image of JF Kennedy, mid-speech, alongside those of astronauts, choppers, street scenes and images from art history. On the surface, they are brightly coloured celebrations of American culture, but they also speak of the tragedies of the era. Retroactive II (1964) is one such print. Before Rauschenberg had received his design back from the silkscreen maker, JF Kennedy had been assassinated. In 1970, he turned a collage that was a rejected design for the cover of Time magazine into a screenprint. Entitled Signs, it includes the images of both assassinated Kennedy brothers (JFK and Robert), the body of Martin Luther King, soldiers in Vietnam and the singer Janice Joplin, who died of an overdose soon after the print was made. History was happening faster than Rauschenberg could make art, and the result is a series of works that represents the hopes, triumphs and tragedies of the times. “Danger”, Rauschenberg said, “lies in forgetting.”

This exhibition is more than just a survey of a prolific artist. It is a fantastically curated tour through the creative mind of one extraordinary man who was part cultural magpie, part innovator and part philanthropist. And while his work is rooted firmly in history, his influence and relevance lives on. 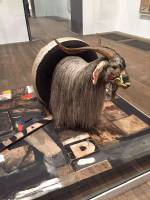 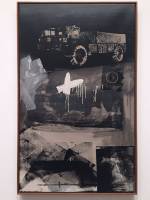 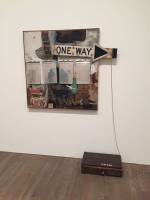 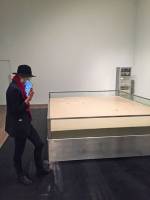 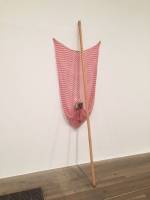