Damage Control: Art and Destruction Since 1950

Damage Control: Art and Destruction Since 1950

In his novel The World Set Free (1913), the science fiction writer HG Wells described a post-atomic world in which a new weapon of mass destruction, the atomic bomb, had been discovered.

In August 1945, his prediction became a reality as the first atomic bombs fell on Hiroshima and Nagasaki. Almost 40 years after he wrote the novel, in August 1950, Wells’ sibylline vision was recalled on the front cover of Collier’s magazine. This cover was designed by Chesley Bonestell and accompanied an article entitled, Hiroshima, USA: Can anything be done about it? While this article marked the five-year anniversary of the atomic bomb, it pushed Wells’ antecedent vision into a posterior reality. Bonestell’s vision, which captured in nauseating lucidity New York ablaze, drifts across temporal frames. It refers back to apocalyptic myths, to a contingent historical moment and a futuristic nightmare: a mushroom cloud hanging over New York. Taking the atomic bomb as a reference point to explore the theme of destruction, the exhibition Damage Control: Art and Destruction Since 1950, performs a similar operation to Bonestell’s image. Destruction is at once trans-temporal, while firmly embedded in the cold-war context. Yet, by refusing to commit to either temporality, the exhibition begs the question, when does destruction loose some of its destructive force?

As one enters the exhibition, the use of the bomb as a definitive metastasis is marked by Harold Edgerton’s film Photography of Nuclear Detonations (1950). Produced at the request of the Atomic Energy Commission, the film documents nuclear tests carried out at Los Alamos. Recorded for scientific purposes, the explosions captured on film in slow motion take on the form of an abstract dance. The film captures both the reality of the bomb as a technological weapon, monitoring its shockwaves and wind effects, and points to its conceptual value as the instigator of a new aesthetics. This duality is maintained throughout the exhibition. For example, within the first room we are confronted by a display of cultural artefacts from the aftermath of the bomb. This includes Hiroshima (1946), John Hershey’s well-known collection of articles published in the New Yorker, which preserves, in chapters entitled A Noiseless Flash and The Fire, individual life-stories amidst the homogenising narratives of technological destruction. Another work depicts a clock stopped at the moment the bomb dropped. This work, Shōmei Tōmatsu’s Atomic Bomb Damage: Wristwatch Stopped at 11:02, August 9, 1945, Nagasaki (1961), becomes a physical index of that precise moment.

While, among others, works such as Tōmatsu’s refer directly to the atomic bomb, the exhibition posits the emergence of conceptualism and its aesthetic of destruction within this historical context. With this in mind, Robert Rauschenberg’s infamous work Erased de Kooning (1953) is gifted a new reference frame. Rauschenberg’s gesture of slowly erasing the work of his idol, Willem de Kooning, is no longer hailed as an emblem of indeterminacy, but is set within a historical narrative of trauma during the early cold-war era. The positing of conceptualism within this framework is stressed by the inclusion of documentation from the Destruction in Art Symposium (DIAS) held in 1966 in London. The event was organised by Gustav Metzger, whose movement Auto-Destructive-Art sought to mimic the system of destruction contained by the H-bomb. The conference brought together an international coterie of artists that included Yoko Ono, Raphael Montañez Ortiz, John Latham, and Barry Flanagan, as well as Hermann Nitsch and Otto Muehl, some of whose works are presented within the show. While the artists surrounding the DIAS event connect the logic of destruction to the poetics of the H-bomb, one letter included in the exhibition, by Yves Klein, points to how the dialectic between art and history can be reversed. Writing to the president of the International Conference for the Detection of Nuclear Explosions, Klein put forward a forceful argument for all A- and H-bombs to be painted blue. The reason he gave for the inclusion of colourants was because: “Their eventual explosions should not be recognised by only those who have a vested interest in concealing their existence or (which amounts to the same thing) revealing it for purely political purposes, but by all who have the greatest interest in being the first to be informed of this type of disturbance, which I deem to say is all of my contemporaries.”1 With the coming of the Blue Revolution, rather than responding to history, the artist will colour it Klein Blue.

While Damage Control posits the poetics of destruction within a specific transitional moment, as the theme extends into contemporary practice, it becomes less historically contained and the theme turns increasingly trans-historical. Rather than being confined to the latter half of the century, informative essays in the catalogue by Russell Ferguson and Kerry Brougher discuss the root of destruction in modernist avant-garde practice and the iconoclastic aesthetics of Futurism, Surrealism and Dadaism.2 Therefore, just as destruction is hailed as a general zeitgeist for early 20th-century modernism, its extension into contemporary practice becomes just as amorphous as it does prior to the historical realisation of the bomb. In both their catalogue essays, Ferguson and Brougher draw a comparison between Theodor Adorno’s 1949 declaration: “To write poetry after Auschwitz is barbaric” and a post-atomic aesthetics of destruction.3 However, if the atomic bomb is hailed as a historical rupture, once posited in both a pre- and post atomic era, the transtemporal nature of destruction confuses the postwar aesthetic touted within the exhibition.

Although the exhibition moves chronologically forward, therefore, destruction becomes a motif that takes on a less determined form. Warhol’s screen prints 5 Deaths (1963) and Red Explosion (Atomic Bomb) (1963) and Ed Ruscha’s The Los Angeles County Museum on Fire, (1965-68) call attention to the simulated nature of destruction. Therefore, while works touch on the mediated nature of destruction, the theme takes on the desensitised quality of simulacra as it looses its definition. For example, Jake and Dinos Chapman’s work Injury to Insult to Injury (2004), in which they deface a series of prints by Francisco de Goya, alludes directly to Marcel Duchamp’s L.H.O.O.Q. (1919). This reveals the 1950 punctuation point determined in the exhibition to be somewhat arbitrary. Works that respond to the contemporary political situation, such as Ai Weiwei’s Dropping a Han Dynasty Urn (1995), loose their pertinence when considered in relation to a general poetics of destruction, rather than as a direct reaction to the oppression of the Chinese government. Other works, which chronicle pointless acts of sabotage, such as Pipilotti Rist’s Ever is Over All (1997) and Christian Marclay’s Guitar Drag (2000), push destruction on to a scale of somewhat diminished relevance.

Once destruction is increasingly serialised and abstracted within the exhibition, it  becomes progressively desensitised. While the theme of destruction progresses aesthetically, the historical narrative never advances beyond 1945. Instead, we are stuck in a historical time lag, while the cold war, the advancement of nuclear armaments and the current atomic threat are neglected. Therefore, once the artworks veer away from the historical situation, their potential as interlockers seem diminished. This is even more curious as you exit from the Hirshhorn Museum on to the National Mall to be overpowered by the Capitol Building. The presence of this iconic political structure, where real-life acts of destruction are debated, is a prompt that destruction can not only be looked at through the lens of aesthetics, a simulacrum to be parcelled off into an exhibition. Rather than leaving the exhibition by way of contemporary works that turn destruction into a somewhat tame poetic zeitgeist, I would prefer to exit from the beginning, by way of Edgerton’s film. This is because, although Edgerton documents an atomic test, itself a reproduction, its historical contingency reveals destruction to be a central political reality. It celebrates the terrifying force of destruction, rather than putting an emphasis on mediation destroying the significance of destruction itself. 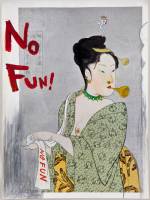