Eadweard Muybridge: Shaping and Shifting Our Point of View

Eadweard Muybridge:
Shaping and Shifting Our Point of View

Eadweard Muybridge’s photographic practice is so familiar to us; it is easy to forget he began his pioneering work over 100 years ago. Muybridge was working on animal locomotion before Picasso was born, and the painter and sculptor Edgar Degas (amongst other artists of that time) used Muybridge’s photographs to understand how to image bodies in motion

It has long been accepted that Muybridge expanded the field of photography and even began the concept of filmmaking, before filmmaking had been invented. Yet as writer Rebecca Solnit documents in her article Eadweard Muybridge: Feet off the ground, Muybridge’s life and career were not without controversy and hardship.1

That Muybridge’s influence has continued to significantly inform artists from his lifetime to the present day is evidenced in works from Degas2 through Marcel Duchamp3 and Francis Bacon4 to Sam Taylor-Wood5. But also revealed in this remarkable Tate retrospective, are the various contraptions and processes invented to make motion images, and more surprisingly Muybridge’s less familiar work of documentary and landscape photography.

Born in the UK in 1830, Muybridge moved to New York City in his early 20s where he worked as a bookseller. By this time Thomas Cole the British born painter and founder of the Hudson River School, had been painting landscapes of upper New York State’s rural areas for around 25 years, it is likely that Muybridge would have known and admired Cole’s images. (This connection is not so tenuous when viewed in the light of Muybridge’s sublime landscape photographs, made in Northern California around ten years later).

Following a stagecoach accident in 1861, Muybridge returned to the UK “where it is possible that he studied photography” (Tate catalogue text). Albumen Silver Print, the first commercial paper print from negative process had been developed in France in 1850, and was widely used. In 1866 Muybridge returned to the US and joined a photography business in San Francisco, the following year he visited the Yosemite Valley and made Silver Print images of the spectacular rock face “El Capitan”. 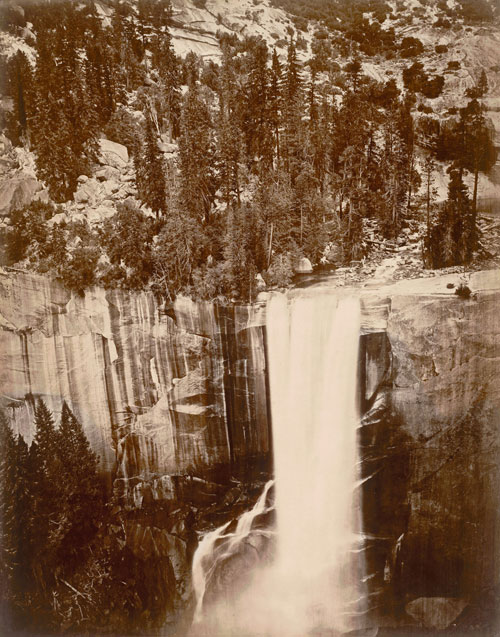 Muybridge’s deep rich brown prints – not sepia but tinged through the chemical and paper combinations – contain the wispy blurred motions of long exposures. Waterfalls seem like cascading light, while his later seascapes of the Pacific Coast loose definition between sky and water. Frustrated by “the medium’s limitations, in 1869 [Muybridge] patented a camera sky shade so that he could expose his film separately for the sky and the subject below”6 gaining the definition between land and sky.

Although Muybridge was not the first photographer to take photographs in the Yosemite valley, he certainly made some of the earliest and most spectacular images of that Northern Californian wilderness7, contributing to our experience of sublime landscapes, (Muybridge photographed El Capitan some 70 years before Ansel Adams’s images of the same viewpoint8); it follows that Muybridge’s images may also have played a part in the evolution of the conservation movement.9 When Muybridge was commissioned by the US government during the late 1860s to take images of the Modoc war in Northern California, his work began to influence documentary photography. Muybridge arrived too late for the war and, (20 years before Edward Curtis posed his American Indian pictures fixing an image of peoples and landscapes10), Muybridge posed people from the Warm Spring tribe as Modoc warriors to reconstruct some battle scenes. 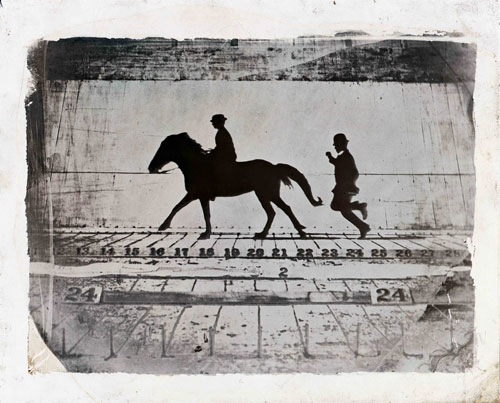 Eadweard Muybridge. Leland Stanford, Jr. on his Pony “Gypsy” – Phases of a Stride by a Pony While Cantering, 1879. Wilson Centre for Photography.

But Muybridge’s curiosity for new methods of imaging agitated him away from landscapes and battle sites and in 1872 he was commissioned by millionaire and racehorse owner Leland Standford. Standford wanted to know whether horses hooves, in full gallop, all leave the ground at the same time (Muybridge’s images revealed that they do). Muybridge photographed Standford’s horse Occident, and there began his extensive investigation into animal locomotion.

Undoubtedly the process of Muybridge’s industry must have been at the least arduous for all involved, and studying the actions in so many images throughout this extensive Tate exhibition, leaves us, as Francis Bacon’s Muybridge – inspired painting so potently reflected, unsettled. Perhaps it is better that now, in a time of greater consideration for our fellow creatures, we cannot see outside the rim of his lens. Yet despite these concerns Muybridge’s images still provide valuable inspiration, and we continue to be richly informed by his point of view.

7. Charles Weed took the first photographs of the Yosemite in 1859, Muybridge’s first visited Yosemite in 1867 then again in 1872. Yosemite's Structure and Textures: Photographs by Eadweard Muybridge, Carleton Watkins, Ansel Adams, and Others, on Traditional Fine Arts Organisation on line. http://www.tfaoi.com/aa/7aa/7aa803.htm

9. Tony Perrottet “John Muir’s Yosemite, The Father of the Conservation Movement Found his Calling on a Visit to the California Wilderness”. Smithsonian Magazine July 2008. http://www.smithsonianmag.com/people-places/yosemite.html The naturalist “Father of The National Parks” and wilderness successor to David Thoreau and Waldo Emerson, John Muir helped draw up Yosemite’s proposed boundaries in 1889, and petitioned US Congress for the National Parks bill, which was passed in 1899. 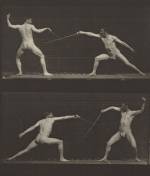