Ansel Adams’ images are as fundamental to the narrative of the American West as the films of John Ford or the legends of Butch Cassidy, Billy the Kid and Doc Holliday 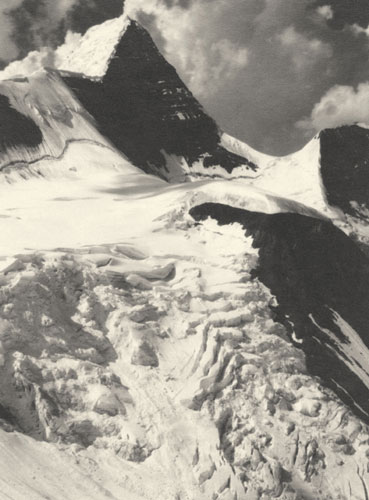 Ansel Adams photographs demonstrate an obsession with nature — immense, primitive, unsullied by human activity — but the way he portrays stark mountains and brutal cliffs echo, consciously, the man-made canyons and concrete peaks of New York and Chicago. No big city apartment is complete without a framed Ansel Adams poster for the residents to marvel at the moon they see from their windows casting shadows from skyscrapers in imitation of the silhouettes of the Rocky Mountains.

The ubiquity of Adams reproductions in the United States — on everything from diaries, calendars, postcards, refrigerator magnets and chocolate boxes — and his sheer popularity has lead to his downgrading by many critics. So too, his concentration on nature, rather than people makes his work ‘empty of political content’ unlike American photographers of the following generation (Frank, Klein, Arbus) and the photojournalists who took centre-stage during the Second World War and its aftermath.

‘Ansel Adams at 100’, celebrating the centenary of Adams’ birth, provides an opportunity for critical reappraisal and to view a large variety (over 100) of full-sized, original prints, rather than the few, small, badly reproduced images that may have become hackneyed through over-exposure (in every sense of the word). The exhibition reminds us that Adams was not just a perfectionist, but an important technical pioneer.

He took his first photographs at the age of 14, with a Kodak Box Brownie camera, while on holiday in Yosemite in 1916. He was immediately obsessed, with both the place and the art; he set about educating himself about the science of photography, theory and practice, which he mastered and began to revolutionise by his early 20s.

His first steps as a serious photographer were influenced by the Impressionists. For a short period he emulated the ‘pictorialists,’ photographers who used soft-focus, misty effects, often achieved in the darkroom. These early works are surprising, very different in style from those for which he is best known; they are rarely seen but are important in understanding his evolution as an artist.

Under the influence of another photographic pioneer, Paul Strand, he discovered that he could capture vast landscapes while preserving crisp detail and, in fact, the monumentality of his subject could actually be enhanced by fine focus and sharp contrast. An early breakthrough, in 1927, became one of his most famous images — ‘Monolith, The Face of Half-Dome’, for which he used a dark red filter and an exposure 16 times longer than his previous attempt. When developing the plate, he realised he had finally preserved what he had seen — visually and emotionally.

With Edward Weston, Imogen Cunningham and others he founded ‘Group f/64’ -- f/64 being the aperture that achieves the greatest depth of field and clarity of focus. He developed the ‘zone system’, controlling the tone of different portions of the image by manipulating exposure of the negative and development of the print. The apparent simplicity and purity of his images began to belie the complexity of the techniques used to achieve them and his output often fell to less than a dozen works a year.

His most famous and widely reproduced image is ‘Moonrise, Hernandez, New Mexico.’ Its familiar, final appearance is very different from the contact print and illustrates, very well, the care and precision of Adams’ darkroom work. A layer of thin, white clouds at the top of the picture has been eliminated; the moon is burned-in to emphasize the contrast with the lower cloud layers; the profile of the distant mountains is given extra exposure to provide clearer delineation; and the foreground trees have been also treated to a longer exposure to create density and texture.

Adams frequently reprinted and reinterpreted his negatives. The exhibition includes two prints from the negative of ‘Aspens, Northern New Mexico’ made 20 years apart; they demonstrate how his early delicate and subtle style became bolder and melodramatic as he aged. The later print could have been taken on a very different day — it is flooded with light, bold with highlights and contrasts.

All his great photographs are here, as well as ‘Moonrise’, ‘Half Dome’ and the ‘Aspens’, there is El Capitain’ and ’Mt Robson’; as well as a series of less familiar, more intimate images of individual trees, stumps, leaves on water and grasses.

Standing a few feet from the large-scale original prints, even he most familiar images have a stunning immediacy. A professional photographer who viewed the exhibition alongside me expected to confirm his opinion that Adams is ‘banal and clichéd’. Instead he was made ‘sick with jealousy’ at the vitality of images created over 70 years ago, with relatively simple technology, and was stunned that he could have such an emotional response to photographs that did not rely on suffering humanity as a subject. 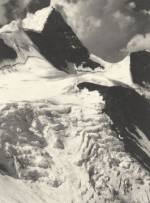 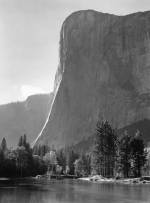