Guy Bourdin at the V&A. Fashion photography as art

Fashion photography as art – from the beginning

In the 1970s, fashion seemed to be at its lowest ebb. The 60s, when London was the style capital of the world, had passed; yet to come were the 80s and 90s when fashion would replace radical politics and rock & roll as the prime manifestations of youth culture. 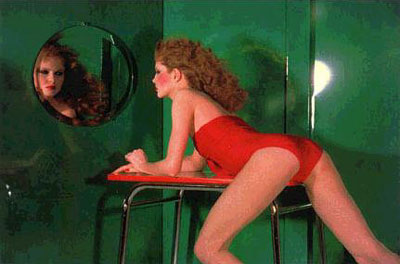 Guy Bourdin at the V&A
Victoria and Albert Museum, London until 17 August 2003

Yet even if clothes were less interesting, their depiction was undergoing a blazing revolution - and the man behind the change was Guy Bourdin, whose photography changed the face of fashion advertising.

Perhaps in response to many seventies designs, Bourdin rejected the 'tyranny of the product'. He was the first photographer to create a complex narrative, then snatch a moment - sensual, provocative, shocking, exotic, surrealistic, sinister - and simply associate it with a fashion item. The object was no longer the sole focus of the image, the image had an independent existence in which the product appeared merely incidental. The narratives were strange and mysterious: two semi-naked women, leaning over a sink full of shoes, help each other on with bikinis; the detached lower legs of a mannequin (wearing the 'featured' shoes) climb stairs; a woman in an overcoat is obscured behind a concrete post, her legs and shoes appearing on either side; a woman in a skin-tight bathing suit is draped over a table, back toward the viewer, staring at herself in a mirror. A rare, rejected (by French Vogue), photograph featured a model's head (wearing a hat) alongside a row of gutted rabbits. 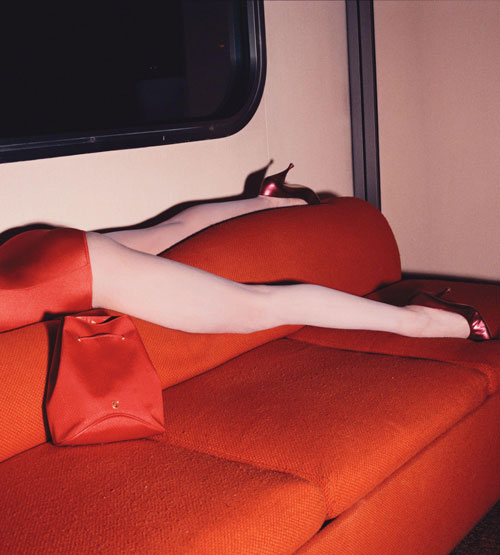 It is not just the subject matter that surprises in Bourdin’s work. Before him, models were (mostly) demure and colours were 'tasteful'. Bourdin’s palette is filled with glaring, raw, clashing, saturated colours - startling, even today. His work may have been influenced directly by William Eggleston, the American photographer credited with elevating colour photography into an 'art'. Eggleston's images too, although captured from reality (he never posed his subjects and usually hid that he was taking photographs), froze strange incidents in saturated, primary colours, and the objects of his images were often mysterious.

Although we don't know if Eggleston was a formative influence, Bourdin was certainly in the grip of surrealism from an early age. His early mentor was Man Ray and he greatly admired Edward Weston, a formalist photographer fascinated by texture, whose work, in which different fabrics and surfaces are juxtaposed, is echoed in many of Bourdin's images - stockinged legs surmounted by bare buttocks, surrounded by silk bed sheets with a pink, fuzzy, stuffed elephant toy on top of everything.

Painters also attracted him: Magritte's influence can be seen in Bourdin's image of a naked woman, standing to attention, wearing a gasmask; the mysterious narratives and geometric compositions contrived by Balthus provided inspiration for Bourdin's groundbreaking set-ups. Bunuel's films were also important in establishing his surrealistic, nonconformist tastes and his desire to shock. Bourdin was born in Paris in 1928 and was almost immediately abandoned by his mother. A personal tragedy, perhaps, but he grew up at a time and in circumstances in which it was possible for a young person to explore revolutions in art and philosophy and experience revolutions in politics directly with the movers and shakers of the various movements.

Unfortunately, Bourdin was not a natural self-promoter - unlike, say Helmut Newton. Bourdin thought little of his 'gift to posterity'; he did not collect his works or make any attempt to preserve them. As a result, Bourdin's influence on subsequent generations of photographers (even beyond the world of fashion) has been greatly underestimated. Although he worked for French Vogue for 30 years, there was no popular book of his images.

Remarkably, this exhibition at the V&A is the first large, museum-based display of his work and has only been possible as a result of a long and dedicated reassembly by his son, Samuel Bourdin. Guy himself wanted his work destroyed after his death (which came in 1991), but fortunately, the fact that he had not collected it all together actually saved it from destruction. This exhibition also includes Bourdin's non-fashion work, personal Polaroids, landscapes and informal experiments - so a detailed understanding of his artistic development and thought processes are possible.

This exhibition removes the mystique surrounding much fashion advertising. Why does a photograph of a woman disappearing behind a mirror - her dress a blur - require a list of the products she is wearing: dress, necklace, scarf, shoes, make-up - even though you can't actually see any of them? Bourdin himself was not interested in the commercial process. He loved to create interesting tableaux, mysterious vignettes; the products, the 'fashion' was simply there to make his ideas possible.

With Bourdin, as the exhibition reveals, fashion photography became art.