Isabel Toledo: Fashion from the Inside Out – book review

Isabel Toledo: Fashion from the Inside Out – book review

On Inauguration Day, First Lady Michelle Obama made a radical break from tradition, forsaking the typical red or blue ensembles favored by her predecessors. Instead, she wore a golden yellow wool lace coat and dress designed by Isabel Toledo. The optimistic colour (called lemongrass by Toledo) and choice of designer are symbols as relevant to the age as an African American president. 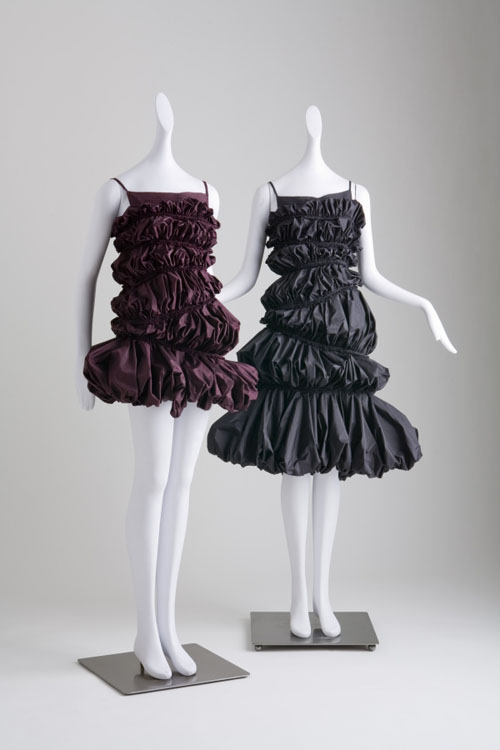 Toledo is something of a renegade in the American tradition. Born in Cuba in 1960, during the revolution, at the age of eight Toledo came to America with her family. She says, 'I felt like I was in wonderland. That positive feeling about America has never left'.1 In 2005, recognizing the impact on American fashion made by Toledo and her husband, artist Ruben Toledo, the Cooper-Hewitt National Design Museum of the Smithsonian Institution honored Toledo Studio with a National Design Award.

Given her self-made status and enthusiasm for her adopted country, it seems ironic that, following an initial embrace by the mainstream fashion industry, Toledo now functions on the fashion fringe. Yet, Toledo has an ever-growing list of devoted clients, Obama included, who purchase garments from her collections through select retailers. There are many reasons for her clients' devotion: original and daring designs; meticulous craftsmanship; elegant manipulation of sensuous fabrics; and unusual and remarkably flattering silhouettes. Toledo's designs focus on the women wearing them. Without recourse to decorations that scream for attention, women wearing a Toledo exude a confidence imparted by the way they feel wearing it. While utterly original, most of Toledo's designs cannot be called avant-garde. Her greatest contribution to fashion design is the way in which she produces classics that are, indisputably, modern. Many adjectives have been used to describe Toledo's work (from 'street-smart' and 'sophisticated' to 'bizarre' and 'extreme'), but there is one that will, most likely, never be spoken along with Toledo's name: trendy.

Coinciding with a mid-career retrospective of Toledo designs, from the mid-1980s to the Inaugural dress of 2009, held at the Museum at FIT in New York City (17 June–26 September 2009), Yale University Press in association with the Fashion Institute of Technology has released a catalogue notable for its lively text, dynamic photographs and stylish fashion illustrations. Written by FIT exhibit co-curators Valerie Steele and Patricia Mears, the volume recounts Toledo's history from her early fascination with sewing machines; to her experience as a novice designer figuring out with her husband how to produce seasonal collections in their home studio; to a brief stint as creative director at Anne Klein; and now as a mature independent artist pursuing her own vision, no longer staging attention-getting fashion shows and without big-dollar backing. The second part of the catalogue describes Toledo's designs within the context of a series of categories exemplifying her approach to dressmaking. The categories reveal Toledo to be more of an engineer and architect than a fashion designer, in the conventional sense. For her, design is a problem-solving process, a bridge between vision and creation.2

Toledo works closely with her husband as he gives initial visual substance to her ideas.3 She does not sketch, preferring to work directly with fabric by draping and sewing. Acknowledging the pivotal part played by Isabel and Ruben's symbiotic relationship, Steele remarks on their physical similarities (small, thin and dark); parallel histories (refugees from the Cuban revolution who emigrated to West New York, New Jersey, and attended the same high school); and work ethic (intense and continuous), but states that their differences are key to their success as artistic and business partners: 'Ruben is outgoing, spontaneous, voluble; he draws constantly. Isabel is reserved, serious, stubbornly focused on her own individual vision'.

The most delightful photographs in the catalogue are ones indicating that Ruben's playfulness and interest in Surrealism has softened his wife's serious side. These show a gowned Toledo in her studio swirling a hula hoop on her hips, a formally dressed Ruben clowning in the background; Toledo in a ribbon-fronted gown with dramatic sleeve treatment, hair severely pulled back and sporting a Daliesque face painting; and Ruben's rendering of a Toledo-designed hair ornament that, literally, provided eyes in the back of models' heads in her spring 1997 fashion show.

The 288-page hardcover catalogue (20 black-and-white and 300 colour illustrations) offers many insights into the difficulty of describing Toledo and her fashions. Her champions in the fashion industry, well-placed clients and downtown New York artists have likened Toledo's commitment to technical experimentation to Geoffrey Beene and Charles James; her haute couture approach to day wear to American sportswear designer Clarie McCardell (1905-1958); and her penchant for risk-taking to Marc Jacobs, Romeo Gigli and John Galliano. Other commentators, notably Women's Wear Daily, have highlighted the less accessible among her creations. Looking through the catalogue, readers may stumble on a few designs, such as those for Fish Eye Mask (spring 1988), Pubic Hair Knitted Pieces (fall/winter 1993-1994) and the Harness dress (spring/summer 2003). Far more characteristic are Toledo's ingenious and undoubtedly wearable ombré silk chiffon Jellyfish dress (spring/summer 1988), silk tulle Waterfall dresses (spring/summer 2007), lace, organdy and chiffon Redneck dress (spring/summer 1998), and hand-painted (by Ruben) Broomstick Librarian shirtwaist dresses (spring/summer, 2008). These garments are the work of a poet whose medium is fabric. In Toledo's hands, through expert manipulation, fabric yields an impressive range of effects, eliminating the need for additional ornamentation.

The title of the exhibit and catalogue allude to Toledo’s education through dressmaking. After graduating high school, she volunteered at the Costume Institute of the Metropolitan Museum of Art in New York, then directed by Diana Vreeland. For four years, Toledo's sewing skills were employed to repair historic garments and shape mannequins. Without a grounding in fashion history, Toledo did not recognize the names of the garments' famous creators but she did recognize their technical mastery. Physically immersed in the garments, she saw how they were built 'from the inside out’.

In the second half of the catalogue, Mears explains, via eight categorized segments, some of the ways in which Toledo began to build dresses with this method. Conceived by the Toledos and first used in an exhibit at FIT in 1998 organized by Steele with Fred Dennis (Toledo/Toledo: The Marriage of Art and Fashion), these categories are fluid.4 After reviewing Mears's texts, if readers challenge themselves to fit garments from one category into another, they will discover that it is quite easy to do so. The real benefit of these segments derives from their layout: The illustrations for each category consist of Ruben Toledo's drawings, garments draped on mannequins and garments displayed flat. Viewed as shapes, Toledo’s frequently asymmetrical fashions are, in fact, well described by such category titles as 'organic geometry', 'origami' and 'liquid architecture'. The sheer brilliance of Toledo's gorgeous Scarf dress (fall/winter 1997–1998) becomes clear when Mears compares its construction to a suspension bridge. Mears says that the most successful examples of ‘Suspension’ designs 'use a pulley or cable made of self-fabric cording ... In a series of loops that undulate on a more or less horizontal axis, Toledo manipulates folds of taffeta that are sometimes drawn in more tightly across the chest or pulled out to form lobes that stand away from the ribcage, giving the dress its unorthodox shape'.

The inclusion of Michelle Obama's Inaugural Day outfit in the FIT exhibit will draw many visitors. Nearly 70 other garments follow Obama's show-opener, engaging readers in a much broader dialogue with Toledo's aesthetic. It isn't an easy vision to grasp. In an industry of high-powered design careers made by trends, multimillion-dollar advertising campaigns and celebrity models, Toledo has remained true to herself. For more than 25 years, she has labored in the Toledo team’s studio to understand fashion through the crafts of two-dimensional drawing, three-dimensional draping and trial-and-error sewing. Steele and Mears have a firm grasp on the technical force behind Toledo’s magnetic poetry. Their appreciation of the designer is more than a monograph; it is an inspiration.

References
1. All quotations used in this catalogue review appear in Isabel Toledo: Fashion from the Inside Out by Valerie Steele and Patricia Mears, published by Yale University Press in association with the Fashion Institute of Technology (August, 2009). The catalogue retails for US$60.
2. Steele is director and chief curator of the Museum at FIT and author of Fifty Years of Fashion, New Look to Now and Gothic: Dark Glamour, among other publications. Mears is deputy director of the Museum at FIT and author of Madame Grès: Sphinx of Fashion and co-author, with Steele and Clare Sauro, of Ralph Rucci: The Art of Weightlessness.
3. Ruben Toledo is the illustrator of Nina Garcia's The Little Black Book of Style (William Morrow, 2007) and Garcia's The One Hundred: A Guide To The Pieces Every Stylish Woman Must Own (William Morrow, 2008).
4. Following this first solo exhibit of the couple's work, Toledo's designs were included in Addressing the Century (1998), an exhibit at the Hayward Gallery in London. In 2000, the Toledo/Toledo exhibit was restaged by Curator Anne Bissonnette at the Kent State University in Ohio. 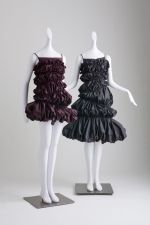 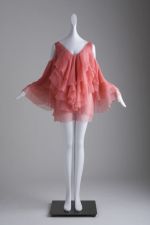 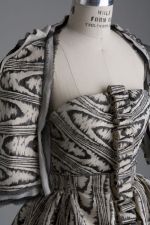 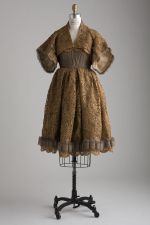 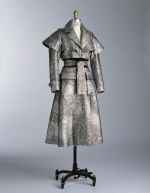 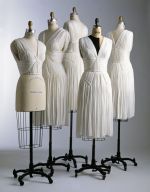 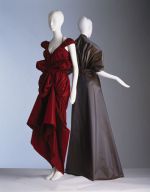 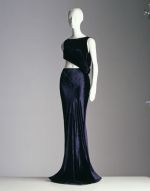 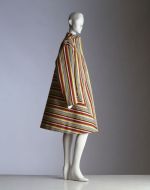 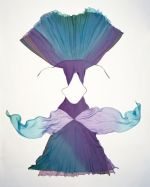 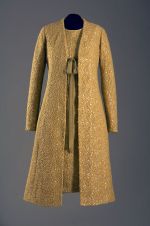