Camouflage is not a much-visited field in contemporary art. Yet it is described comprehensively and usefully in the exhibition, Camouflage, now at the Imperial War Museum. The talents applied to the various modes of military and naval deception are well illustrated. Camouflage initiated in the military sense in France, but Britain soon came to realise its importance in war and peace. The exhibition projects forward from the military purpose to cover the impact of camouflage in the pop and fashion worlds.

'In order to deform totally the aspect of the object I had to employ the means that Cubists use to represent it,' said Lucien-Victor Guirnard di Scévola, the French artist who was appointed as the commander of the lst Camouflage Section of the French army in the First World War. This unit eventually employed some 1,200 officers and other male personnel, and 8,000 women. This is a remarkable admission from a military quarter of any due recognition for art assisting war. The French army made the early running in the art and science of camouflage, notwithstanding the British army’s own experience in the Boer War. Evidently, the War Office lacked the actual resourcefulness to take the first steps in this direction, or perhaps it felt that there was no need to disguise the troops, who were deemed expendable cannon fodder.

The British army then created the appropriately, though cryptically-entitled unit, the 'Special Works Park RE (Royal Engineers)' from March 1916. There does not seem, in either France or Britain much sense of urgency. In France, in the early months of the First World War, uniforms were experimented with on a hand-dyed basis. This was an extremely labour-intensive form of production for something intended to save lives across the board.

The exhibition is the first comprehensive survey ever made of the growth of military camouflage and is extended to cover the adaptation of camouflage motifs, via surplus military material, into the realm of popular culture. It deals with the uniforms themselves, the vehicles, aircraft, vessels and installations, which demanded disguise both on land and at sea, and in the air. It reveals not only the sophistication of attempts to disguise the participants in war, but also to differentiate them by nations. The German adoption of 'field grey' showed a wish to be different from the British medium of 'khaki', and also from the various French versions of blue. Field grey was smarter perhaps, but was khaki the most effective of all. The term 'khaki' actually comes from the Hindu word khak, meaning 'dust', and led to 'dust-coloured' or dull-yellow variants. The Bengal Lancers also wore uniforms of this colour, unlike the Punjab Cavalry, who wore dark blue for one regiment and scarlet the other, and were allowed considerable latitude in five versions.

The exhibition was designed by Casson Mann as specialist exhibition designers and they have achieved an ingenious division of the theme into the nine separate subject areas in a kind of landscape achieved by cutting and folding walls and floors, enhancing all this with an intelligent reliance on both patterning and colour. Yet the exhibition, which could easily have emerged from this process as disparate and confusing as camouflage itself, is a model of logical display and clarity, executed nonetheless in a relatively tight space overall. There is, for instance, room for such a rarity as a beguiling image of the photographer, journalist, (and Vogue model) Lee Miller, concealed in camouflage netting and cream by her lover and long-term admirer Roland Penrose. Although he was not actually at the front, but simply giving a fillip to his earnest lectures to the Home Guard, one wonders what Dad’s Army would have made of this apparition. Then there are scintillating examples of the extremes of elegance to which camouflage could be directed, as in a pair of coloured camouflage sniper’s gloves, or a gaily multi-coloured German steel helmet - one to stick your head over the parapet for. On a much larger scale, the ingenuity applied in the process of deceiving U-Boats was clearly highly evolved and undoubtedly successful in creating visual confusion. Foreseeably perhaps, the Italian Army developed the first printed camouflage fabric, of some elegance, as late as l929. Disruptive pattern then emerged as an underlying principle.

The imperatives of the camouflage experts were rationalised into four key groups: conceal, distort, disguise/deceive, and advertise. Concealment involved much delving into nature’s methods, and the concealment of vehicles, tanks and trucks became paramount, rather than that of the soldiery. New technology today, with the use of infra-red finders, nullifies the basic agenda of concealment.

Distortion came to rely on 'dazzle' as a technique, first developed by the British marine painter Norman Wilkinson, and the 'Dazzle Section', which he commanded caused a dramatic reduction in overall shipping losses in the First World War. Disguise and deceive techniques had resort to all kinds of model tanks in the desert war, designed to give the impression of stronger forces than actually existed. These canvas mock-ups attracted sustained aerial attacks to no benefit to the attacker.

The imperative, 'advertise' has been that aspect of camouflage that has shown the greatest capacity to survive beyond military life and infiltrate pop and fashion dramatically. In the l980s and l990s, student wear was subject to amazing variations, all derived from basic surplus clothing, and became a symbol of group identity, more powerful even than Levi's jeans. Maybe it is the 'hoody garb', however, that has so far escaped incorporation in this catalogue of headware. It will not be for long.

Meanwhile, one could not leave the museum shop here without succumbing to the embrace of a camouflage teddy bear, guaranteed to wreak fear and despondency in the playgroup of cuddlies. I bought one for my grandson.

This exhibition is a serious example of how the Imperial War Museum has expanded in scholarship, museology, and exhibition skills over the past decade. As an example of their new virtuosity, just around the corner was a similarly innovative exhibition entitled Animals at War, also to be strongly recommended. For this exhibition, Camouflage, there is also a definitive publication from Thames & Hudson, Camouflage, by Tim Newark for which Dr Jonathan Miller has written a highly intelligent and stimulating introduction. 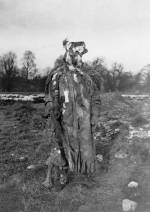 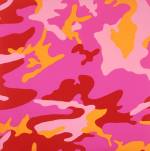