In January 1967 Sol LeWitt, then an artist just starting to make his presence felt in Europe, wrote to the dealer Konrad Fischer to discuss sales: “What happened about Multiple? Hans Mayer wanted to make a large (150 cm) one. This is a mistake. If someone buys this, then they will not buy a large piece.”1

It’s striking how easily Jeff Koons and Larry Gagosian could have solved this problem for LeWitt: make a large multiple in a tiny edition, place one or two with major collectors or museums, then rely on the conferred status to create a “multiple” more prestigious and fetishised than any one-off work. Yet Sophie Richard’s book also reveals that such strategies were already in development. Not only is the text littered with acknowledgements by dealers of the need to get works into public collections – offering lower prices to “place” a work, or higher prices to set the market value – but a 1971 letter to a prospective buyer even pointedly mentions the locations of the other two copies of a Kosuth “neon”.2

This kind of example is characteristic of Unconcealed, where the specific artworks – not to mention their political background – almost disappear behind the dealing structure around them. In a stated attempt to work in the documentary tradition of Conceptual artists themselves, Richard focuses on 15 artists as their work filters through 14 dealer galleries, 11 public institutions, and various critics and private collectors. The aim is to document the support and dealing networks around Conceptualism “rather than the art itself”, an aim that places her work amongst the growing body of literature highlighting the role dealers played in the movement.3

For Richard, while the two Paul Maenz organised shows of 1967 stand at the beginnings of the European conceptual network, it is Konrad Fischer that quickly emerges as its central figure. After opening his Düsseldorf gallery in October 1967 Fischer established himself as the primary European dealer for a number of artists, with early first European solo shows (starting with Carl André, October-November 1967)andfirst solo shows (starting with Hanne Darboven, December 1967). On the whole the artists’ dealers were only too happy to send out works to Europe; selling at no percentage – and so no profit – was fine, for in the early stages it was all about reputation and prestige for the artists wherever possible. The network quickly spread around Europe, and 1970 marks its proper establishment, with dealers in Germany, Netherlands, Italy, Belgium, France and England that all could all share artists and costs for exhibitions.4 Acceptance of a sort followed during the 1970s, though as secondary dealers piled into the market many of the original network couldn’t keep up financially and were forced out. An interesting point for those who would think that to emphasise dealer involvement in the movement would be to foreground their financial concerns.

The second half follows what Richard calls the dealing structure, and covers the movement of works first to private then into public collections. What is “unconcealed” in the investigation are the patterns of the journey, primarily the centrality of dealers in selecting artists and manoeuvring their works into museums. First the dealer network was established, then sales to private collectors, acted as “a sort of value confirmation of Conceptualism”, with many subsequent private to public transfers via gift or foundation.5 Given that Conceptualism saw the rise of a new kind of “dealer curator”, it followed that many museum exhibitions were organised by the dealers, with a strong link resulting between such exhibitions and the museums’ subsequent purchasing. Richard here concludes that the opaqueness of artist-dealer-curator relationships, alongside the new rapidity of transfer from studio to museum, creates a fundamental need for the re-examining of museum ethics and training.

The book is an impressive work of scholarship, yet the speculative foray into ethics brings a more pragmatic question to mind.6 In short, is any of this much of a surprise? For one thing the new dealer-curators, while of course still needing to eat, often seem as much motivated by genuine belief in artists and showing new art as anything else. (Fischer notably reluctant to deal with people he didn’t like, as well as declining to take on art he didn’t “understand”).7 With this new sort of art and the new type of exhibition that came with it, is it really surprising that curators would buy works related to the museum and to the dealers whom they knew? Faced with the increasingly rapid rise from art student to superstar, the moral onus on curators, as Richard herself shows a number of them to feel, is surely to try and intervene to pick up examples of the artists they believe in when the prices are still viable. We could of course be more honest with ourselves that the “genius” of the artist fits very precisely into collaborative social and economic “dealing” structures, but few nowadays would seriously think to question that.

Richard’s introduction provides probably her best justification: that Conceptual art led to “the formation of innovative exhibition and dealing practices” which “are still being used today”.8 Six years ago Benjamin Buchloh, featured here in three of the Jacques Charlier photographs that illustrate the book,9 spoke of the contemporary art world as a place of “social and institutional formations for which we not only do not have any concepts and terms yet, but whose modus operandi remains profoundly opaque and incomprehensible to most of us … we have more artists, galleries, and exhibition organisers than ever before in the postwar period, yet none of these operate in any way comparable to the way they functioned from the 1940s to the 1990s”.10 Different though our contemporary institutions are, on Richard’s view they are far more than just comparable. And understanding the dealing network that grew up with Conceptualism is a small but crucial step towards understanding what we’re faced with today.

4. These were Fischer and Friedrich in Germany, Art & Project in the Netherlands, Sperone and Françoise Lambert in Italy, Wide White Space and MTL in Belgium, Sonnabend and Yvon Lambert in France, Lisson and Nigel Greenwood in England.

6. It should be noted that the author tragically died before being able to revise her text (originally a PhD) for publication. Unconcealed is in fact edited and presented by her supervisor Lynda Morris, so how much would have been rethought or revised by Richard is impossible to say. The appended databases and interviews that make up a large part of the volume are nonetheless a highly useful resource.

7. Unconcealed, p. 98. The reference is to an interview with Fischer that he ‘later regretted’, his example being ‘Kosuth’s texts’. 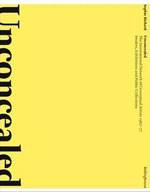