Despite their reputations as three of England’s most popular ‘modern’ painters, this is a strange grouping. Sickert’s gritty, impressionism-influenced scenes are a world away from the crisp visions of Spencer, and as for Sickert and Sargent, the former’s views were neatly summed up when he wrote that ‘It is a pitiful thing, and one of the best proofs of the nullity of art-criticism in this country, that Sargent’s painting is accepted, as it is, as the standard of art, the ne plus ultra and high water mark of modernity’.1

The unusual combination is a result of the Fitzwilliam’s ‘hidden depths’ programme, which proposes to create shows from the museum’s collections, and in doing so to explore the unusual links that may arise. As such, these three are linked by their dogged defence of the figurative – and naturally – the display that results is one hung by subject matter. The slight stretching of the collection that this necessitates creates a great opportunity, as a number of rarely seen drawings, watercolours, and even a portrait of Sickert by his last wife are brought out. Some themes are better suited than others, however, so although ‘artists on the move’ results in an interesting variety of pictures, ‘music’ involves an admission that although the other two played, only Sickert made it a major theme of his art.2 ‘Conversation pieces’: ‘women in interiors’ sadly features none of the Sargent society portraits that would make such a bizarre contrast with the Sickert and Spencer works on show, and the final section, ‘Spencer, God and Love’, seems almost an excuse to show the Fitzwilliam’s admittedly impressive Spencer murals (though it is nicely tied in at the end by a quotation from Sickert, who rather unexpectedly came to Spencer’s defence in 1935).

Despite such small issues, the hang by subject matter itself provides a fascinating angle on the art of the time. Sickert’s 1910 statement ‘Anything! This is the subject of modern art’ is quoted in the catalogue, and in the context seems like a suggestion that art can now deal with subject matter from everyday life (and not that modern art no longer has need of subject matter, as some would have interpreted it).3 This direct rebuttal of the formalist, almost content free view of modernist painting promoted by Roger Fry at the time is significant. Fry, whose own attempts at painting are held in such abundance in the Keynes collection at King’s College (from which many of the works on display here come), is conspicuous by his total absence. Instead of his beloved Cézanne, drawings by Millet, Degas, and Charles Samuel Keene are featured, and together with the hang one could even say that a rethinking of modernist painting is what is ultimately suggested here.

Often referenced, yet surprisingly little analysed, when Baudelaire spoke of the ‘painter of modern life’ it was not his friend Edouard Manet that he described, but the now little known painter and illustrator Constantin Guys.4 Sickert was tireless in attempting to promote an alternative lineage for modern art, with ‘illustrators’ such as Hogarth, Daumier and Charles Keene as fundamental to the birth of modern art (noting in 1925 ‘I am old enough to remember the terms in which Manet and Fantin and Degas and Pissarro used to speak of Charles Keene’).5 When Percy Wyndham-Lewis attacked Fry as ‘continental mediator’, it was because his promotion of Cézanne and Van Gogh in formalist language meant a return to ‘the defunct aestheticism of the 90s’ and ‘art for art’s sake’ in opposition to the ‘English virtues’ of Rowlandson and Hogarth.6 When Christopher Nevinson resigned from the London Group in the same year he condemned the anti-literary and anti-representational ‘pure art’ formulas in a letter that culminated ‘Poor Cézanne, poor Baudelaire, poor Whistler! May the ages yet deliver them from their supporters!’7

Perhaps that is exactly what is happening now, and exhibitions like this one can play a role in such a reassessment. Curated in this unusual way it seems obvious that these very modern paintings cannot be equated with ‘autonomy’ or ‘abstraction’, and that the desire to represent aspects of modern life is at the heart of why these painters did what they did. To criticise the slight stretching of the collection, or the tenuousness of certain links, is very much to miss the point. The ‘hidden depths’ programme is a chance for the curators to test ideas, to bring to light rarely seen elements of the holdings, and to enact the constant rethinking that seems necessary in order to make the paintings live. In a time when the cost of new acquisitions is approaching prohibitive levels this seems like exactly the sort of resourceful attitude, carefully treading the line between scholarly and accessible, which should be expected from a free public museum. 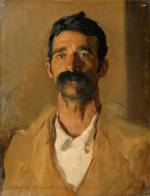