Sargent: Portraits of Artists and Friends

Sargent: Portraits of Artists and Friends

If it is true that you can judge a man by the company he keeps, then John Singer Sargent (1856-1925) must surely have been a fascinating individual. He counted eminent writers, musicians, artists and stars of the stage among his friends, and some colourful characters certainly line the walls of this exhibition. A private man and an eternal bachelor, his romantic life remains subject to speculation, but we don’t need tantalising anecdotes or tales of heartbreak to furnish our imaginations. These sitters speak for themselves; their personalities shine out from the canvas as they stride, recline, sing and even cut birthday cake. And we can learn something of Sargent’s interactions with them, and the world around him, by the way he so intuitively and fluidly captures not only how they move, but how they look back at him.

Somewhat of a nomad, Sargent was born in Florence to American expat parents and trained in Paris. After a scandal brought about by a supposedly lascivious portrait, simply entitled Madame X, Sargent, despondent and dejected, relocated to London, where he soon regained his confidence among the stars of the West End and the artistic giants of the city. He went on to spend much of his life travelling in America (where he was treated like a returning hero), Europe and the Middle East. In short, he belonged everywhere and nowhere in particular, although many came to see him as a British portraitist. Sargent spoke four languages, promoted the careers of numerous musicians and was, himself, a talented pianist.

Part of the aim of this exhibition, curator Richard Ormond tells us, is to demonstrate this otherwise neglected side of Sargent, but the picture that started it all is a modestly sized and initially unassuming painting. Robert Louis Stevenson and His Wife (1885) depicts the writer’s wiry figure as he paces the floor, nervously stroking his moustache. His large, wide-set eyes glance towards us as if he has only just noticed that there is someone in the room. The composition is an unusual one. Between Stevenson and his wife, Fanny, is an open door leading into a dark hallway, as if a third presence has entered the room. If this powerful painting was to be exhibited, it needed a context and the context was Sargent’s friends.

Dr Pozzi at Home (1881) could hardly sit in sharper contrast to the portrait of Stevenson. Samuel-Jean Pozzi, we are told, was the father of modern French gynaecology, and, by all accounts, a bit of a libertine. He did much to advance medicine for women and was surgeon to the Parisian elite, but he also founded the League of the Rose, which the text in an accompanying book informs us, was “a society devoted to the confession and acting out of sexual experiences”. Pozzi then, “was a man of the world”, who moved in elite circles. Sargent has painted the young surgeon both dressed in, and surrounded by, red – a colour that not only alludes to the dangers of his profession, but to the passions of his private life. His dexterous hands, the tools of his trade, are elegantly placed and finely painted; his long fingers play with the cords of his gown. Pozzi stands confidently, and a little affectedly, gazing out like a model in a catalogue, the perfect impression of a man who is happy with his lot.

Another big character, this time resplendent in green, looms over the gallery. In Sargent’s life-size portrait of Ellen Terry as Lady Macbeth, the statuesque actress holds aloft a shimmering ruby-encrusted crown. Possessed by an unquenchable lust for power, her glassy blues eyes are glazed and unseeing. Sargent was so taken by Terry’s performance at the London Lyceum that he resolved to paint her. After some persistence on the painter’s part, the actress agreed, and the resultant piece is a masterful realisation of one of Shakespeare’s most fascinating creations. If this painting amounts to a collaborative performance by the legendary Terry and the deeply astute Sargent, then the opulent green silk dress is the icing on the artistic cake. Designed by Alice Comyns-Carr, a close friend of Sargent, it is embroidered with blue tinsel and red beetle wings, with gold brocade on the long sleeves, adding shimmering pre-Raphaelite overtones to the painting.

For all of Dr Pozzi’s regal presence or Terry’s splendour, the most affecting portraits must surely be those that capture the unguarded moments. The versatile novelist Vernon Lee was a childhood friend of Sargent and his portrait of her, painted in 1881, was completed in one sitting. Lee looks away from the artist and towards a source of light, perhaps a window, which is reflected on her round glasses. However, unlike many of Sargent’s more glamorous sitters, Lee is not staring affectedly into the middle distance. Rather, she appears to have turned her head because something has caught her eye, her mouth slightly open as if in mid-conversation. This relatively modest and informal portrait of an intellectual giant beautifully captures the spirit of the private Lee at ease in a way that could only have been achieved by a close friend.

Reproductions cannot do justice to Sargent’s glowing paint. A small, and presumably unfinished, work, entitled In the Garden, Corfu (1909), will, no doubt, receive little mention in writings on this exhibition. Indeed, it would be easy to dismiss it as sentimental, or even saccharine, but Sargent captures the Mediterranean light, the warmth and the peace of the scene so adeptly that it is tempting to head straight out of the building and to the nearest travel agent. In fact, a number of the oil sketches exhibited in the last room of this exhibition have this quality, and it is in them that Sargent’s talent as a mark-maker becomes most apparent. In his introduction to this wonderful exhibition, Ormond succinctly summarised the artist’s practice. Sargent, he explained, “fluffed a few strokes, but gets to the heart of things”. It would be hard to disagree. 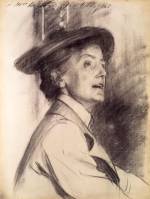 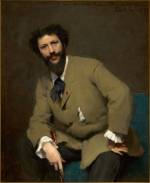