While Vanessa Bell stands strong as an artist in her own right, her art can nevertheless not be separated from her life at the centre of the Bloomsbury Group 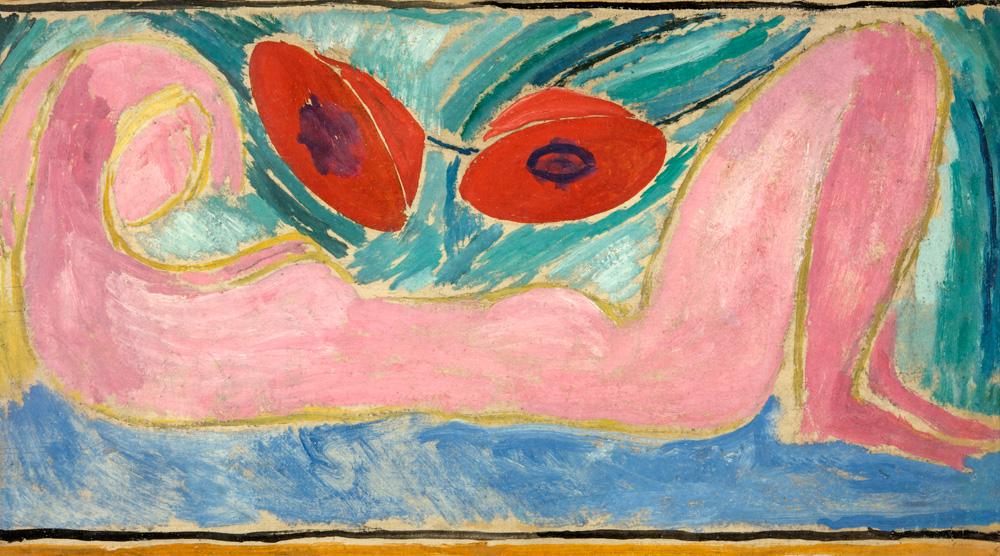 This is the first major monographic exhibition of work by Vanessa Bell (1879-1961), and the curators, Sarah Milroy and Ian A C Dejardin, are at pains to emphasise their wish to separate Vanessa Bell the artist, and Vanessa Bell’s art, from the many stories and dramas surrounding Vanessa Bell the person, as part of the Bloomsbury Group. Certainly, her work deserves attention – “Vanessa Bell the painter was as radical as Virginia Woolf the writer,” wrote the Guardian critic Fiona MacCarthy, when Bell’s work was shown as part of The Art of Bloomsbury at Tate in 19991 – and she stands strong as an artist in her own right, not just as the sister of Virginia Woolf, the wife of Clive Bell, or the lover of Roger Fry and Duncan Grant. Nevertheless, no matter how hard one tries – and the curators of this exhibition really have tried – her art cannot be separated from her life. In fact, even they concede as much in the “At Home” section of the exhibition, where they portray the complex (or, perhaps one could argue, remarkably simple, in the way she lived them out) interpenetration of her roles as mother, wife, lover, sister and artist.

The exhibition, in many ways, is best read back to front, since the first two rooms are doubtlessly the strongest, focusing on her portraits and her abstract work and designs with the Omega Workshops. Entering into the room of familiar faces – portraits that Milroy describes as “irrefutable evidence of her talent” – is like walking into one of the famous evening gatherings in Bloomsbury, when the intellectual friends would come together to critically discuss art and literature, and which Bell stood silently at the centre of, early on as the “angel of the house” and, later, nicknamed “the saint”. After the death of her mother, Julia Stephen (née Jackson – the favourite niece and muse of Julia Margaret Cameron), and her elder half-sister, Stella, Bell took on the role of wife and mother, sustaining the patriarchal household led, nominally, by her father. After his death, she tore up the rulebook and set up afresh, creating her own life – the Bloomsbury life – of which art and literature formed the beating heart. Bell presided as the matriarch at the centre, both in London and, later, at Charleston farmhouse in Sussex. The atmosphere in this room of portraits is much like that in her rural abode, where Bell and Grant painted every possible item of furniture, wall, door and surface: light and bright colours, an exuberance and a certain sense of joie de vivre.

Trained at the Royal Academy Schools by John Singer Sargent, who critiqued her work for being too grey, it appears Bell, by 1910, had heeded his advice. Many of her early works from before this point were destroyed in a fire in her London studio during an air raid in 1940, but Iceland Poppies (c1908-9), as an example on show, reflects Sargent’s traditional teaching and the aesthetic of the New English Art Club, where it was shown in 1909. Having seen, and been much influenced by, Fry’s ground-breaking 1910 exhibition, Manet and the Post-Impressionists at Grafton Gallery, where she would have encountered works by Paul Cézanne, Henri Matisse and Paul Gauguin, however, her portraits adopt a formal simplicity, minimising detail, using an often “hacking” brushstroke,2 and strikingly outlining the figures in a dark black or blue – a technique frequently found in early experiments in English post-impressionism.3

Perhaps most immediately interesting is a comparison between Bell’s self-portraits and her paintings of her sister. Known to be an attractive woman, especially compared to the awkward looking Woolf, Bell nevertheless paints Woolf as attractive and herself as plain, echoing, no doubt, her refusal of conventional ideas of beauty. In Self-Portrait (c1915), she adopts a defiant and combative posture. The paint is sketchy, with the canvas showing through, and colour is filled in in blocks – even for the depiction of her hair. Virginia Woolf (c1912), on the other hand, appears sensual and alluring, her lips slightly open – perhaps a reference to her flirtation with her brother-in-law Clive, or perhaps to her being a woman of words, not images – a private battle that ran between the sisters their entire lives. In a second portrait of Woolf (1912), sitting in an armchair, her face is deliberately blurred, and, as with nearly all of Bell’s portraits, the eyes are left as black holes, abysses, questioning how well we might ever really know our subject, even one with whom we share such a symbiotic relationship.

The most sketchy portrait of all – Lytton Strachey (c1913) – is truly quite remarkable. There are scarcely any facial details, with eyes, nose and glasses merely intimated in a shocking yellow, but the shape of the face and the orange beard make it immediately recognisable as Strachey, capturing his sharp-witted spirit. Later in life, Bell referred to this work as unfinished, but, as Dejardin amply argues, there is a difference between leaving something unfinished and knowing when to stop.

Entering this gallery, one is immediately struck by portraits of two of Bell’s rivals in love: Mrs St John Hutchinson (1915) (her husband’s lover) and David Garnett (1915) (Grant’s lover, AKA Bunny, and later the husband of Bell and Grant’s daughter, Angelica). The former is an expressionist painting, in pink and green, showing Bell’s use of paint as a weapon, or a voice for her true feelings. Although Hutchinson was welcomed into the fold at Charleston, according to the liberal rules of “loving in triangles”, the hatchet-style brushwork and poisonous colours of this portrait cannot be overlooked.

Grant, of course, appears in this hall of fame too, in Duncan Grant in front of a Mirror (c1915-17). From 1914 onwards, Bell loved this man and planned her life around him, despite his homosexuality. Interestingly, he once remarked that he first knew she was in love with him when he caught her looking at him in the mirror, while he was shaving. This painting might seek to recapture that moment, or to create an image of him, a second Grant in the mirror, who might belong to her and return her love.

The curator of the 1999 Tate exhibition, Richard Shone, notes, that, later in life, Bell “tends to idealise her sitters, even sentimentalise them”,4 and it is clear that the works on display here stem from her best period. In fact, as Milroy observes: “Her period of procreativity [1908-18] is also her most intense period of creativity” – a fact that explodes the oft-upheld myth of motherhood and art being mutually exclusive.

As well as introducing her to the work of the post-impressionists, Fry, with whom she had a three-year affair from 1911, had a significant personal influence on Bell’s work. He is said to have told her: “You have genius in your life as well as in your art, and both are rare things”.5 Of the effect of the 1910 exhibition, she later wrote: “It is impossible, I think, that any other single exhibition can ever have had so much effect as did that on the rising generation” and “Here was a possible path, a sudden liberation and encouragement to feel for oneself, which were absolutely overwhelming.”

“If anybody got Matisse, it was Bell,” says Dejardin, and Design for a Folding Screen: Adam and Eve (1913-14), shown in the final room of the exhibition, is very much based on Matisse’s Dance (1910). This is shown alongside Studland Beach (c1912), a large and nearly monochromatic landscape with female figures, simplified to a strongly rhythmic line, and often described as Bell’s “modern masterpiece”.

The second room of the exhibition focuses on designs made as part of the Omega Workshops, a design collective based at 33 Fitzroy Square in Bloomsbury from 1913-19, founded by Bell, Fry and Grant. Here, we see patterns drawn on graph paper and painted on to linen, photographs evidencing the patterns in the flesh at Charleston, and a vitrine filled with dust jackets for books by Woolf, all of which were designed by her sister. In 1914, in his book Art, thoroughly proofread by Vanessa, Clive Bell coined the term “significant form” to describe the arrangement of shapes, colour and line to capture and convey the sensations and emotions of human experience. In response, Bell painted a series of four purely abstract works, experimenting with this idea. There is a clear correspondence between these paintings and her work for the Omega Workshops – design and painting cross-pollinating. Although keeping up with her design work, Bell soon returned to representational painting, explaining, in a note to her son Quentin: “One discovered that one was, after all, in love with nature”.6 Even before this, in a reply to an essay by Leonard Woolf in 1912, she had laid out: “The reason I think that artists paint life and not patterns is that certain qualities of life, what I call movement, mass, weight have aesthetic value … [Clive] says one gets the same emotion from flat patterns that one does from pictures. I say one doesn’t …”7

Living amid a circle of writers and critics, Bell was used to absorbing, processing and rejecting art criticism. Her strength in her own intuitions might be seen when, in 1914, Grant sent her some oranges and lemons from Tunisia. Immediately, she painted them (Oranges and Lemons, 1914), writing to him: “They are so lovely that against all modern theories I stuck them into my yellow Italian pot and at once began to paint them. I mean one isn’t supposed nowadays to paint what one thinks is beautiful.”

Similarly – and rightly so – succumbing to beauty, a touching highlight of the exhibition comprises a small oil painting and some sketches of her first son, Julian (1908), wriggling and gurgling in his crib. In a letter to her sister from August 1910, Bell says: “Julian’s eyelashes are the loveliest colour you ever saw – like the down on a butterfly’s wing.” Again, her domestic and maternal role is seen to strengthen her existence as an artist, not hinder it.

By the Second Post-Impressionist Exhibition of 1912, Bell herself came to be represented. Fry wrote of the artists in this show: “[They] do not seek to imitate form, but to create form; not to imitate life, but to find an equivalent to life,” and this was true for Bell, too. Her daughter, Angelica, noted years later, that: “From Vanessa’s conversation it soon became apparent that she still believed, as she always had, that subject and even motivation in art had no importance.” She goes on to say, however: “There was a split in her mind as to why things were done, and how; it did not occur to her that one cannot exist without the other.”8 Yet her life seems to epitomise just this co-existence and interdependence. Her art and her life were inextricably intertwined: as her art was her life, so her life was her art. As Dejardin notes, in his preface to the exhibition catalogue: “Life was as creative a construct as any of her paintings.”9 Thus, while it is important to recognise and celebrate Bell’s painting in and of itself, it can only truly be understood and appreciated through the prismatic Bloomsbury lens. By inadvertently reaching this conclusion in their attempts to extract her painting from this web, the curators of this long overdue exhibition have done Bell proud. 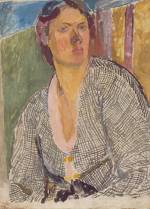 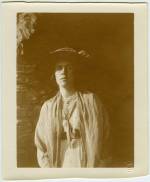 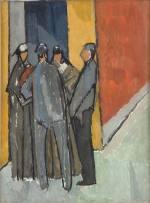 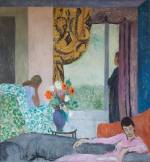 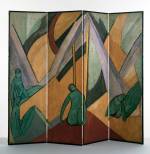 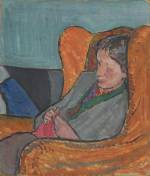 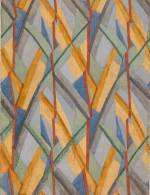