The Real Van Gogh: The Artist and His Letters

The Real Van Gogh: The Artist and His Letters

Van Gogh is almost unique in his fame: not just the epitome of the modern-artist-as-tragic-hero, but perhaps even the origin of the whole paradigm.1 As is admitted in the exhibition catalogue this fame now rests on the “twin pillars” of his work and the myth that surrounds him.2 The letters – sent throughout his lifetime, kept by his brother Theo and first published in 1914 by Theo’s widow – are allegedly the bridge between these pillars. Last year, after 15 years of research, scholars at the Van Gogh Museum published by far the most comprehensive and carefully annotated set of the letters to date.3 Building on this research to show letters and pictures side by side, this exhibition now partly dispels, and partly revels in the remnants of the “van Gogh legend”.

“…there is not really much to say about van Gogh’s art except that it is not particularly good.”4 One does not have to wholly agree with the sociologist Alfred Gell to admit that van Gogh was not always a great artist, and even in the eyes of such devoted admirers as Meyer Schapiro the quality of his early “peasant” paintings is at least disputable.5 Nonetheless, the idea of paying silent homage to the “secular saint” van Gogh is nowhere more visible than in the first rooms here. The entrance prepares the visitor with letters, a slide projection, and blown up photographs of Vincent and Theo. Arriving first thing in the morning one can see the large crowds queue to slowly and quietly file one by one past the early paintings, many of which are elevated out of their darkness and intended “peasant” status by fantastically bourgeois carved and gilded frames (though the drawings on loan from museums are mostly hung in more fitting plain wood).

With van Gogh’s 1886 move to Paris came greater exposure both to contemporary colour theory, and to the Japanese woodblock prints he had discovered in Antwerp the year before. Three of Hiroshige’s prints are on display here, as are numerous letter references to Impressionists and colour (with key references added to the paintings’ captions to make up for the difficulty of reading the letters themselves). Pictures from 1888 (the Basket of Oranges) and 1890 (Roses) are immediately brought in to make the point: the already bold brushwork has if anything become thicker and more differentiated, yet the swirling lines and contrasting colours, the product not just of intuition but of study and outside influences, actually seem to be what finally validate his style.

Still, the gap between art and life remains extraordinary. Below a large painting of novels – Romans Parisiens (Les Livres Jaunes) (1887) – are arranged, opened contemporary editions of 14 books Van Gogh mentions in his letters. On the one hand Sensier’s book on Millet is revealed as a clear influence on his earlier “peasant” works, as are Silvestre and Blanc’s books on Delacroix on his later interest in colour. On the other, in the same letter describing Romans Parisiens, he professes an admiration for the naturalist novels of Zola and De Goncourt. Their ability to “paint life as we feel it ourselves” and thus satisfy our need for “truth” is, at least on the level of their “realist” formal means, in striking contrast to the luminous blues, pinks, yellows and greens in the painting.6

Even more striking are the prints by Rembrandt and after Delacroix and Millet that hang next to the unmistakeably van Gogh “interpretations” of them. In Evening (After Millet) (1889) circular rings are added to the straight lines of light emanating from the central lantern, with the effect instantly recognisable as that in van Gogh’s numerous later reed pen drawings of the low sun hanging over fields. In Raising of Lazarus (after Rembrandt) (1890) the black and white original is changed almost beyond recognition. The scene is cropped down to a claustrophobic level, while the light surrounding Lazarus, is coupled with a blazing yellow sun above that lends a truly hallucinatory feel.

Beyond such oddities, many will have come to the exhibition simply to bask in the glory of “great” works, and these visitors should in no way be disappointed. From the 1888–9 Chair, to the 1890 Portrait of a Peasant Woman in Straw Hat (popularised after its acquisition by Steve Cohen), to the final three rooms of late works, there is much to see (even Dr Gachet is represented in the form of van Gogh’s only etching). Throughout, the level of involvement with the letters is ultimately left fairly optional. Around a corner in the largest room is a “research section” of sorts, with sets of the letters as well as computers where the online version can be searched (something highly recommended whether one visits the exhibition or not, as these can now be searched by date or key words entirely for free).7 With so many paintings around, searching these could seem like a slight distraction from the “real” activity of the exhibition. As the room is tucked away behind a partition there is no need for the visitor to have any involvement, and many heed the slight air of embarrassment and choose not to.

This choosing may well be motivated by the desire not to question a cultural icon too closely, for after “madness” and primitive “origins” are stripped away, some may not like so much the “real” van Gogh that remains. Letter references may suggest that the Mountains at Saint-Rémy (1889) is not an “outpouring of van Gogh’s disturbed mental state”, but instead a “deliberate and expressive stylisation”,8 but taken at face value the earnestness of the buttery mound of brushstrokes that make up the hill is of questionable quality (or in the eyes of a painter friend, “just a very poor use of paint”). Which is also to say that perhaps the legend is stronger than an exhibition, that people will read things however they wish to do, and that even some of the curatorial decisions seem motivated, however unconsciously, by a desire to bypass the letters as “documentation”.

In the final rooms the letters are mounted on freestanding blocks, with raised glass panels allowing the viewer to see both sides. As one looks at these the hands naturally rest on the block, and the effect is uncannily close to that of being before an altar. Unacknowledged in the exhibition literature, the last room is painted a deep blood red, and of course the famous “last letter” complete with bloodstain – the ultimate relic – is present there in altar, or reliquary-like hang. The exhibition may well demonstrate that “his output of letters and pictures displays a strong internal cohesion”, and that “his double oeuvre cannot be dismissed as the product of a sick mind”,9 but in the end the “double oeuvre” is a fiction, and the letters are recouped as artistic offerings (the process made easier by the sketches with which they are littered). Too ordinary to make the exhibition interesting to a non-academic audience they are necessarily elevated to the higher level, and perhaps this isn’t such a bad thing after all. Who can say that these really would be better as pure documents or literature, rather than bearing the magic they do, as “sacred traces” of the “saintly” van Gogh.

5. In his monograph on the artist, Schapiro wrote that ‘his work in Arles is a new art – his first new art, for what he had done before belonged to tradition’ (Meyer Schapiro, Van Gogh, The Idehurst Press, London, 1951, p. 13). 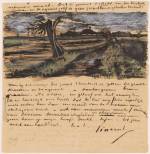 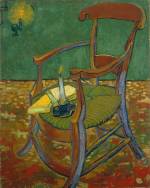 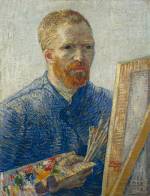 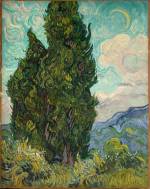