'An exhibition is a display, a performance … and in "China: The Three Emperors, 1662-1795", we are presented with paintings, dress, porcelains, lacquers and furnishings that the rulers themselves employed in elaborate performances.'1 So explains Dame Jessica Rawson, mastermind of the dazzling assemblage at the Royal Academy until 17 April 2006. While there have been about 80 exhibitions of Qing Dynasty material from the Palace Museum since 1974,2 this specifically focuses on the many roles required to be played by the Manchu emperors and the settings in which they played them. 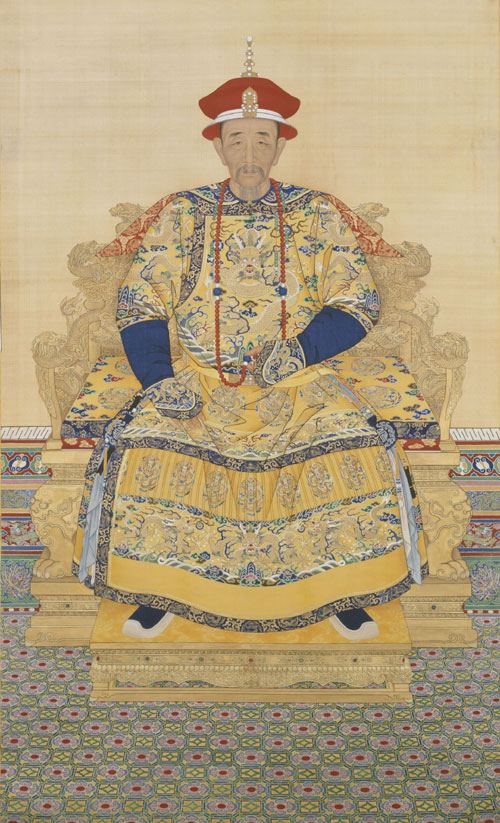 The emperors onstage are Kangxi (r. 1662-1722), Yongzheng (r. 1723-35) and Qianlong (r.1736-95). Kangxi completed the conquest of the Ming and balanced numerous nationalities and factions, achieving political stability in his long reign. Yongzheng was an autocrat: a suspicious, bureaucratic manager, whose unattractive methods yielded order and prosperity in just 13 years on the throne. For the remainder of the 18th century, Qianlong ruled over sheng Qing, the 'flourishing' or 'splendid' phase of the Qing Dynasty. The exhibition devotes a room to each of the emperors and his special interests, but the first sections set out the functions and ceremonies of imperial rule.

We first see the emperors in near life-size ancestral portraits, formally dressed in imperial yellow dragon robes. There is also a portrait of the Qianlong's birth mother, the Xiaosheng Empress Dowager, to whom he was greatly attached. These paintings were used in rituals after death, so, as Professor Rawson pointed out in a recent lecture, we are actually beginning at the end.

Splendid imperial garments also hang in the entrance gallery, giving an idea of the grandeur to come. More textiles are on view in the 'Ritual and Religion' sections, and are among the most exciting objects in the show. A pale blue ('moon white') robe is displayed with the matching ceramic vessels used in annual rituals at the altar of the Moon. A magnificent ceremonial costume for an imperial lama comprises a collar, sleeves, skirt and beaded apron of stained ivory beads.

The court paintings dominate the exhibition. To have so many of these grand works in one place is a major occasion by itself. Many are huge. The emperors are shown in a host of guises: military hero, sportsman, religious devotee, imperial lord receiving tribute, festival celebrant, family man, quiet scholar. Qing court paintings documented the emperors' power and legitimised it. In the era before photography, they also recorded as history important court and ceremonial events, and 'scenes of community life', and are essential to our knowledge of this time in China.3

Among the painted chronicles is one of the 12 horizontal scrolls entitled The Southern Tour of the Kangxi Emperor, by Wang Hui (1632-1717) and other court painters. They show in exquisite, lively, day-by-day detail the events of Kangxi's grand inspection tour of 1689. The scroll at the Royal Academy is the 11th Nanjing to Jinshan.4

Some 70 years later, the Qianlong Emperor commissioned a 12-scroll record of a southern inspection tour. The last scroll illustrating this expedition is also on display at the Royal Academy. By that time, Western influence is clearly visible in the painters' use of linear perspective and foreshortening. Unlike other Chinese scrolls, where the action moves as the scroll unrolls, from right to left, this one shows the emperor moving in the opposite direction as he returns to the Palace.5

One of the most important themes here is East-West interaction: diplomacy, trade and learning. The emperors of China, meant to possess all knowledge and fulfil all roles, made selective use of Western innovation and artistry. The Jesuit painter, Giuseppe Castiglione (1688-1766, Chinese name Lang Shining), arrived in China in 1715 and served under all three emperors. He married Chinese subjects with Western technique. 'Pine, Hawk and Glossy Ganoderma', in which a white hawk represents the Yongzheng Emperor, is a very fine painting, full of Chinese auspicious and political symbolism, executed in Western style.6 In another of the many Castigliones on view, Qianlong appears as a youthful military commander. What is surprising about this portrait is that the Emperor is on horseback - this was quite typical in the West, but previously not seen in China.

Kangxi, among the greatest of all Chinese rulers, was a man of learning and culture. He commissioned grand publishing projects, established the imperial workshops in the Forbidden City and learned science from the Jesuits. The room devoted to Kangxi at the Royal Academy features books, his own calligraphy and a large number of scholars' articles. A porcelain brush pot and wrist rest are decorated as an ink painting of bamboo in the literati style. A stunning set of peach-bloom monochrome porcelains exemplify the technical advances achieved in ceramics of this period.

Yongzheng's reign was very short, and he is the least known to us of the three emperors. He may have been eccentric, but was the real art-lover among them. His reign brought new designs and technical innovations, but 'the results are more immediately associated with Qianlong than Yongzheng, since the son knew how to link his own persona indelibly to this impressive heritage.'7 A celadon teapot, in a shape unknown before Yongzheng, is perfect in its apparent simplicity (but great technical difficulty).

Two sets of paintings need mention here. Firstly, the highly imaginative, if not eccentric, album of Yongzheng in 13 different costumes: Daoist practitioner, European sportsman and Mi Fu practicing calligraphy, to name a few. The intent of this album is the subject of much unresolved scholarly debate.8

The Yongzheng Emperor's 'Twelve Concubines' provides another mystery. Were these Yongzheng's concubines or serving women? These beauties are all dressed in Ming court costume, which was strictly forbidden to Manchu palace women.9 Whoever the models are, their settings are a fantastic source of information about palace interior decoration and display.

Qianlong's reign has been described as a period of 'splendour and degeneration … the culmination of dynastic greatness and the forerunner of an era of deep troubles.'10 At the Royal Academy, we see only the splendour: extravagant productions in jade, lacquer, porcelain, silk, and enamels. Here are technical tours-de-force, objects in porcelain that simulate wood, pewter, pudding stone. Highly decorative 18th-century objects are shown with their ancient sources of inspiration, as in the cloisonné bianhu and the Warring States (475-221 BC) bronze original. Qianlong considered one of his most important roles to be the keeper of Chinese culture and preserver of antiquity He studied and collected voraciously, marking the collection with inscriptions and seals whenever he wanted to show his pleasure in an object - and his ownership thereof.

After all this grandeur, it is almost a relief to enter the side gallery of literati paintings. Here, works by Shitao (Zhu Ruoji, 1642-1717), Wu Hong (c.1615- after 1653) and Gao Xiang (1688-1754), among others, offer a quieter, often soothing view of the world. Some of these artists were 'leftover' subjects, loyal to the Ming, and their works are seen as a form of resistance. Others were professional painters who sometimes worked in the literati style. This gallery makes a lovely exhibition of its own.

China: The Three Emperors, 1662-1795, edited by Evelyn Rawski and Jessica Rawson, with contributions from numerous other leading scholars, is a superb catalogue. It is lavishly illustrated, with thoughtful, detailed entries for all the exhibits and highly informative introductory essays for the eleven sections of the exhibition. There is an extensive public programme at the Royal Academy, including a series of Friday evening lectures; a Focus Day on Imperial Identity in Qing dynasty China; three Monday-afternoon sessions covering Qing Decorative Arts; and a two-day joint symposium, with the School of Oriental and African Studies, on Court Culture under the Qing. This memorable exhibition was sponsored by Goldman Sachs.