Two important exhibitions overlapped recently in England: the first was in Kendal, in the English Lake District, and the second at the Royal Academy in London. They serve to remind us of the silent strengths of a purely British art, indeed one might justifiably say, Scottish art. The first outstanding painter was Euan Uglow, who had, by the time of his death from cancer in 2000, built up a solid constituency of supporters. His fans included former Lord Chancellor, Lord Irvine, and the ubiquitous Blairs, despite the fact that Uglow was producing only two paintings per year latterly. The second figure was Craigie Aitchison, who came from an Edinburgh based legal background. Aitchison specialised in the traditional areas of portraiture, landscape, and still life. He was elected a Royal Academician in 1988. His simple, economical, yet profoundly poetical compositions share with Uglow a soothing peacefulness, a palpable mood of silent contemplation. The more recent 'crucific' paintings convey a singular individualism that is moving in its very simplicity. The Isle of Arran features heavily in his work, as he recomposes the childhood holiday photographs of the 1930s.

This landform is again recomposed for the four panels executed for the chapel of St Margaret at Truro cathedral in Cornwall. An important catalyst in this direction was Aitchison's Italian Government scholarship of 2000. From this stint at Montecastelli has emerged a powerful series of landscape paintings, thinly painted yet movingly emotive of place, of garden landscape. A distant, elevated crucifix of Montencastelli is introduced here via a series of figments; birds, plus a smaller, domestically scaled crucifix, a symbolic bird, a white horse, birds on a lake, vying with the moon (or possibly sun) set in the same picture frame. The portraits shown adopt for the most part the same conventional pose and expression, arms loosely folded, eyes glancing off to the right.

Aitchison's Royal Academy show is clearly a milestone for this painter, and has been meticulously curated and hung in Norman Foster's Sackler Galleries, where the scale is perfect for Aitchison's work. Its distillation of discreet images from everyday life is presented in a mode where elimination of the non-essential offers an unwritten code. Perhaps it is in Uglow's fastidious litany that the dynamic of form binds us in, while Aitchison provides us with escape routes outwards. 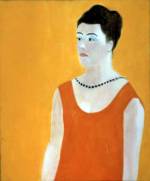 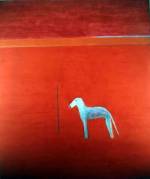 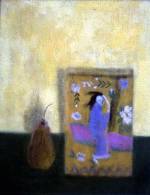 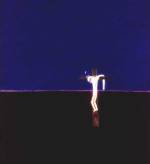