'Royal Academicians in China, 2003-2005' was conceived to coincide with the Royal Academy's remarkable exhibition, 'China: The Three Emperors, 1662-1795', which presents imperial treasures of the Qing Dynasty. The superb exhibition draws on the collections of the Palace Museum, Beijing, and focuses on the artistic riches of China's last three emperors. It is a spectacular exhibition, and a great credit to the Royal Academy for their organisation of it, and to the team of scholars and curators involved. 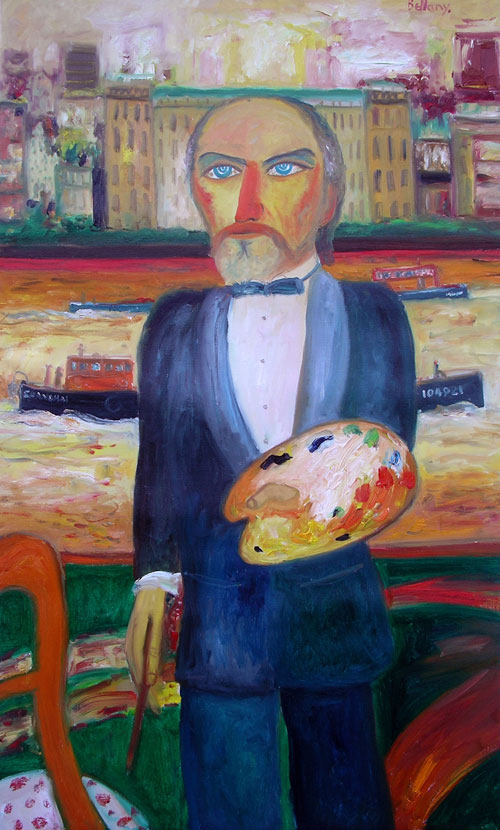 The breathtaking effect of the China exhibition perhaps mirrors the impact that a largely unknown culture of contemporary China has had on the Royal Academicians who travelled there between 2003 and 2005, with the generous support of the Red Mansion Foundation. The exhibition was the culmination of a project conceived by the Foundation to promote cultural exchange between the UK and China. The Red Mansion Foundation sponsored a number of Royal Academicians to travel to China to make works inspired by their experiences there. The exhibition was shown at the China National Museum of Fine Arts in Beijing and at the Art Museum in Shanghai in early 2005.

Precipitated by painter John Bellany who, some years ago, related to Nicolette Kwok, founder of the Red Mansion Foundation, how a residency in Mexico in 1996 had inspired him, he expressed his wish to visit China and be further inspired. The idea was consistent with the aim of the Foundation to bring about dialogue between Britain and China. Bellany's desire to visit China was extended to include other artists. The artists were invited to China as part of Red Mansion's ongoing 'Building Bridges' programme. The Foundation chose a further group of academicians: Paul Huxley, Allen Jones, David Mach and Ian McKeever, for their varied approach to art.

John Bellany responded to the visit to China in his typically passionate and effusive manner. There was a hitch at the airport where the massive supply of canvases and paints could not be cleared by customs because it was assumed that such quantities were not for personal use, but for setting up an art materials shop. Eventually cleared by customs and delivered to the hotel rooms where Bellany and his wife were staying, and where John himself was given a studio, he went on to produce a remarkable 48 canvases in just a few weeks. Bellany's work has always been concerned with issues of mortality, for which he has drawn on his upbringing in the Scottish fishing villages of Port Seton and Eyemouth, near Edinburgh. His father was a fisherman and all of his family were intimately involved with the life there.

Much of Bellany's work is peopled by strange creatures that derive from mythology, the Bible, Celtic legend, and the mysteries and dangers of the sea. No artist of his generation has made such dramatic, humanistic images. It is interesting to see, when he is placed in a foreign culture, what the impact of that experience has on his work. One of the first features is the fact that Bellany focuses immediately on the sea and boats in Shanghai Harbour, just as he does in Scotland. But, where boats and all aspects of the fishing community in Scotland are steeped in Christian mythology and dogma, no such association in China exits. Bellany is candid in admitting that it will take some time to process this largely intuitive response to his experience there. He chose to portray individuals in their everyday situations, and poignant relationships that he perceived between groups or couples, and within family units. Visually, Bellany found the Chinese sojourn a dramatic and marvellous one. He worked staggeringly long hours: after the mornings spent exploring the city of Shanghai with Helen, he painted from the early afternoon until 4 am. The works in the Royal Academy exhibition were a cohesive group of works of great vitality that continue to inform his work.

The paintings by Paul Huxley could not be more different. In fact, each of the artists on show was represented by works that reflected a sense of personal adventure. Huxley's works made for a spectacular installation along the longest wall in the Sackler Galleries, a space that suited his work extremely well. At first sight, these are masterly formal works that play with the Chinese characters and make a wonderful pattern in sequence. The elegant manner in which Huxley shuffles each colour and shape possesses a simplicity that comes from decades of experimenting with a formal abstract language. Huxley was one of the young artists in the New Generation annual exhibitions at the Whitechapel Gallery in London, from 1964-68, which sought to represent the latest developments in British contemporary art (other artists included, Bridget Riley, Allen Jones, John Hoyland, Patrick Caulfield and Patrick Proctor). Greatly inspired by the colour field painting of Morris Louis and Kenneth Noland, Huxley has, throughout his career, pursued a personal abstract art. He lived in New York, where the formalism of Clement Greenberg dominated contemporary art. Paul Huxley did not subscribe entirely to such views and maintained a more fluid, ambiguous form of lyrical abstraction. The geometric forms that have long interested Huxley find a playful and musical equivalent in his Chinese works.

Before the proposed trip to China, Huxley had travelled considerably through New York, Hong Kong, East Germany, Cuba and Morocco. He was, therefore, quite used to working in foreign places, yet was reluctant to satisfy the requirements of the Red Mansion project. Huxley was not unfamiliar with the Chinese aesthetic, having lived on the edge of Chinatown in New York, and travelled to Hong Kong, so he was surprised by how dramatically he was affected by the environment in China itself. The degree of commercialisation, the extent of the economic boom and the massive growth in the building of skyscrapers, could not have been in greater contrast to images of communist China that have, until recently, dominated the West's image of China. Unable to read Chinese, but fascinated by the aesthetic of commercial signs in Chinese, which were angular, not fluidly calligraphic, Huxley found the signs exciting. He took notes and photographs (which he does not normally use in his working method), and enjoyed the increased familiarity and recognition of the same. He wanted to use these shapes (words, signs) in compositions, but was mindful of the fact that unless he distorted them, he might make something legible to half the world's population, but not himself.

Back in London, Huxley called on a former student from the Royal College, a Chinese artist who was able to translate the words he had collected. Huxley was keen to avoid a situation where the words were meaningless, absurd or obscene. At the same time, he enjoyed the prospect of the symbols or words representing fragments of something seen, culturally out of context, but poetic nonetheless. When Frederick and Nicolette Kwok of the Red Mansion Foundation visited his studio, he had four canvases completed. By chance, they made up part of a very pleasing statement. Kwok asked Huxley if he would consider making a further three to complete a dialogue. When the sequence was completed, they were translated to mean: 'People together make a blue sky even more blue'. The hope for a better world implied in this statement fortuitously expressed the very cultural understanding that the Building Bridges project aimed for. Paul Huxley, like John Bellany, continues to produce images inspired by his Chinese adventure. Huxley has recently made three works that use the images from the Chinese works, but he purposely used red, yellow and blue, in contrast to traditional Chinese art, which did not use colour, and in doing so he is paying tribute to the tenets of Modernism, to Mondrian and Barnett Newman, who celebrated the primary colours in their ground-breaking works.

The project that Huxley was reluctant to take part in has, in fact, prompted the opportunity for a fresh understanding of meaning in abstract art, in a pluralist era. For Huxley's paintings have traditionally involved the division of the canvas into two parts from where one part interacts with the other; and, in turn, the artist interacts with the viewer. The dialogue implicit in Huxley's abstract compositions engages in the exploration of similarities and differences, in a Platonic dialectic, where meaning and understanding are sought. This could not be more appropriate for multicultural societies around the world, in the present troubled times.

Based on interviews with John Bellany and Paul Huxley, January/February 2006. 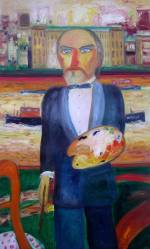 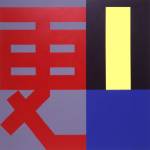 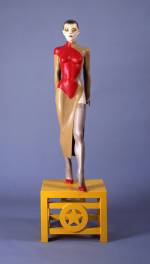 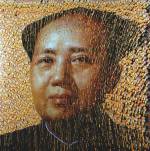 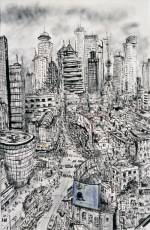 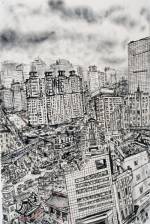 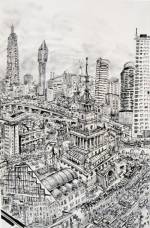